A Mend staff (リライブの杖 Riraibu no Tsue, lit. Relive) is a healing Staff in the Fire Emblem Series, and is the superior counterpart to the Heal Staff. Commonly used by healers with low magic, as it is capable of adding 20 points to the stat. Owing to the availability of competent healers in the series, alongside the relative abundance and affordability of the Heal Staff, players in general thus tend to overlook the Mend Staff for its more versatile counterpart.

In Radiant Dawn, the Mend Staff is safe for equipping healers with, as its weight allows them to inflict fair amounts of damage onto hostile units, provided that their Strength is high enough for them to do so.

In Shadow Dragon, however, the Mend staff sees far more use. This is the result of staves having been nerfed to significantly reduce their users' Magic, alongside the fact that most healers tend to possess low Magic in the game.

In Heroes, Mend appears in the form of a low level assist skill for many staff wielders. It's an upgrade to the Heal assist skill, and is then upgraded into either Recover or Physic.

“Restores many HP to allies in adjacent spaces.”
—In-game description, The Sacred Stones

The Mend Staff, as it appears in the second series of the TCG.

Official art of the Mend Staff in the TCG.

Julia using Mend to recover Fee's HP in Genealogy of the Holy War.

An enemy Priest wielding the Mend Staff in Radiant Dawn. 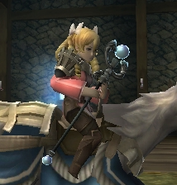 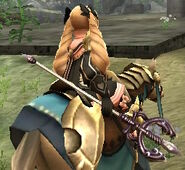