N/A
[view]
The Merchant (商人 Shōnin) is a non-playable combat physical class that is introduced in Fire Emblem Awakening. The exclusive class of NPC Annas, the Merchant class wields Lances as its sole weapon of choice. If successfully protected from being felled during map skirmishes, the player will be rewarded with items and/or gold. 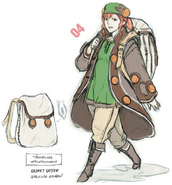 Concept artwork of the Merchant class.

Battle model of Anna as a Merchant.