“I can never forgive Gerxel... They took my grandfather, and now my beloved brother! Princess Maeve, I... I've chosen not to hide any more! I will find my brother and fight against the Gerxel Church!”
—Meriah, in a conversation with Enteh

Meriah (メリエル Merieru, fan translated as Meriel) is a playable character from TearRing Saga: Utna Heroes Saga. She is the daughter of Naris and Rose, and the younger sister of Rishel. She is also the only character capable of wielding ☆Starlight and ☆Aura Rain.

During their childhood, Meriah and Rishel lived in Rimne due to their father's refusal to allow anyone else to enter the Temple of Water. Unlike her brother, Meriah never learned about the crimes that Naris committed against Reeve. Some time prior to the game's events, she lived with her cousin, Renee, in the Church of Blood. However, she eventually left in search of Rishel, whom she had lost contact with two years before. Before departing, she left a letter to tell Renee not to worry about her.

Meriah is introduced when she is residing in the house of an elderly woman at Marl Harbor. Once she hears about the battle between the Leda Alliance Army and the Istorians occurring in the area, she leaves the house with the intention of fighting. Around this time, she encounters Enteh, who recruits her to Runan's army. If Maruju was sent with Runan's army after the first route split, she quarrels with him over their magical abilities. Later in the game, she reunites with Rishel and cries while asking him to never disappear again. If both of them are sent with Runan after the second route split, she receives ☆Aura Rain as a gift from him.

In the ending, Meriah becomes the head of the Temple of Water. Because she feels lonely without Rishel, she asks him if she can visit the Temple of Fire occasionally, which he agrees to as long as Enteh comes along with her.

Automatically from the start of Map 9.

Meriah is the second mage who is recruited by the player. Unlike Maruju, she specializes in the light and fire magic and has exclusive access to two personal tomes, ☆Starlight and ☆Aura Rain. With ☆Starlight, she can inflict heavy damage on enemies and easily dodge their attacks. ☆Aura Rain grants Meriah the ability to attack every enemy on the map, which can only be duplicated by Sherra using Earthquake. Her magic and agility are both quite high and therefore she will have good offense. Meriah also receives decent support bonuses from Enteh, Rishel, Maruju, and Renee. Because of this, she is recommended to use, although she is not quite as good as Rishel and Sherra.

Meriah's battle model as a Mage. 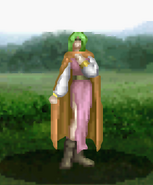