Chapter 1: Dawn of Destiny [joins in Chapter 2: The Princess of Bern] (The Binding Blade)

Chapter 13: In Search of Truth (The Blazing Blade)

Brad Venable
[view]
“Yaaawn! Ahh, another peaceful day in the life of a transporter...”
—Merlinus in a support conversation with Vaida in The Blazing Blade.

Merlinus is a playable character that appears frequently in Fire Emblem: The Binding Blade and Fire Emblem: The Blazing Blade. He resides in either a tent, carriage, or wagon, with only the latter two being able to move. He must be protected, as he has no means of fighting. As a merchant, Merlinus holds the player's armory optionally during each battle.

He is one of the few non-main characters that cannot die along with others such as: Marcus, Nils, Ninian, Oswin, Karel, Karla, Rath, Pent, Louise, Bartre, Nino and Athos, however, unlike the others who do not die, Merlinus will return to help in the next level if he is defeated. In both games, he manages the player's Supply Convoy.

Originally a travelling merchant who peddled goods from all over the continent, Merlinus was attacked by bandits near Caelin territory, and was rescued by Eliwood’s group who were passing by. Because he had always dreamed of serving nobles for a long time, he pleaded Hector to leave supply management to him. This sudden request was met with just as quick approval, and he joined the group. After the war, he set up a shop in Ostia that was quickly shut down, and went back to staying with Eliwood.

An older Merlinus also appears in The Binding Blade, tasked by Eliwood to the personal advisor of his son Roy.

As expected as someone with great business skills, Merlinus has a very sociable personality. However, at his core, Merlinus is rather shy, cowardly and quirky, but also very kind and ultimately loyal, as revealed by his dialogue. It is also revealed that Merlinus is quite a good chef during his support conversations with Marcus and Vaida, as both characters say his food is some of the best they have had.

In The Binding Blade, he isn't as timid and fearful as he used to be; instead, he's very outspoken and sometimes pragmatic in his opinions, is distrustful of people with shady professions or suspicious circumstances like Princess Guinivere or Cath and behaves with a stern if sometimes harsh manner to those who act out of turn with his young master, out of worry of Roy's safety due to his inexperience in the ways of the world.

Description: A servant of Pherae in charge of the army's inventory.

* Wagon only. Tent has no movement.

Merlinus appears as a carriage, his promoted form from The Blazing Blade, in this game. Unlike the next installment, Merlinus is a unit that takes up a unit space and he is not needed in order to transfer items to storage. Also, in order to level up, Merlinus needs to survive 100 rounds of combat from enemy units, which means unless you grind very slowly and carefully, he never levels up for the whole playthrough. He is still very useful for not only baiting out dangerous attacks (but he needs to reach a high level if you want him to dodge reliably) due to the fact that unlike other characters he doesn't die permanently, but also allowing access to the convoy and mass selling in bulk during Chapter 21 for the potential Boots shopping.

As he levels up each chapter he is kept alive, he can eventually upgrade to a moving unit. He still cannot fight, so his tent or vehicle must be protected.

In battle, the player's forces can use the Merch command when they are standing next to Merlinus, so they can withdraw and deposit their belongings. When a unit's inventory is full (maximum of 5 items), the player can send an item to Merlinus in the case that they should obtain another item. The maximum amount of items allowed in storage is 100.

If Merlinus is not deployed in battle, or if he is defeated during the chapter, units with extra items will have to drop one instead of being able to send one to Merlinus, and units cannot Merch from him. However, if his HP reaches zero in one chapter, he will be available again in the next chapter, making him a unique unit in that he can be used again even after his HP decreases to 0. The maximum number of level ups he can get is 25, so he cannot get to level 20 as a wagon.

While he seems devoid of combat utility at first, Merlinus can be used as a fantastic wall because he avoids almost all attacks once he's reached a high enough level due to his amazing speed and luck, and even it he is hit and killed, he will not die permanently. Many enemies are also programmed to attack him over other units, he can be used to protect a unit at low HP.

Pherae's Clerk
Tactician of Pherae for generations. Formally a traveling merchant. Travels with Roy and serves as an advisor. Appears in Fire Emblem: The Binding Blade

Merlinus makes a surprising appearance as a playable character in Heroes and is the first non-seasonal dagger cavalry unit introduced. Unfortunately, Merlinus is perhaps hard-locked to his status as a non-combat unit as he is in his original game as he has extremely low Atk sitting at a measly 20 neutral Atk, dethroning Azama for having the lowest neutral Atk value in the game. In addition to the low power of Daggers in general, Merlinus is almost literally unable to inflict noteworthy damage despite the fact that he has a solid Spd of 35, enough to avoid double attacks from a host of units, but not enough to avoid the higher end of the Spd tiers. His most notable trait however is his massive 50 neutral HP stat, making him perfect for skills reliant on that stat and his bulk overall has enough for both categories thanks to this stat, sitting at a physical bulk score of 81 and magical bulk score of 77. Merlinus is for the most part an unorthodox unit in the current roster and perhaps his long term potential that can come from a preferred weapon and refine can make him more noteworthy, but in his current state, there is very little advantage of using him.
Smoke Dagger inflicts a Def/Res-6 debuff on foes within two spaces of his target, helping to set up enemies to take more damage from his allies. While he can give it a Weapon Refinery boost his stats, he unfortunately needs to funnel it into his bulk or his Spd as improving his Atk does not give much in terms of returns.
Reposition is a valuable and perfect Support skill to place his allies behind him so he can wall off enemies. Wings of Mercy allows him to teleport to an injured ally and can wall off enemies so they can retreat to safety or use his Reposition to further start up their retreat. Distant Guard grants allies within two spaces a Distant Defense effect, gaining Def/Res +4 when attacked by a ranged weapon.

Merlinus is essentially a stalwart wall, thus few have to actually fear retaliation. Bonfire/Ignis or Iceberg/Glacies burst damage is perhaps the only way for him to actual deal significant damage to his foes and even then, he will not be utterly decimating his foes. Simply put, putting an ally who can break through his defenses, especially through skills like Moonbow and Luna can instigate this. As a Cavalry unit, units who have cavalry effective effects like Mathilda, Micaiah and her various forms, or Gray can easily destroy him through his bulk. Raventome users like both Robins, Sophia, and Lyon can inflict color disadvantage, leading to near non-existant damage to these units due to the damage percent drop.

Merlinus should emphasize his strengths and become as massive of a wall as possible. Fort. Def/Res 3 is an excellent choice as the +6 Def/Res boost gives makes him an all around better wall and the drop to his Atk ultimately provides little penalty to his already abysmal Atk. He can also inherit a vast wealth of daggers with various applications and effects that can heavily benefit himself or his teammates through the debuffs or various quirky effects that they often have. Bonfire/Ignis pairs nicely with his higher Def, though Iceberg/Glacies can be considered if he has a Res boon. Panic Ploy pairs extremely well with his HP to inflict the buff reversing effect on his foes given its high value. Savage Blow can also be considered to deal splash damage on his foes to soften them up for his allies to dispatch. Since this can be slotted into his Skill C and Seal, he can deal 14 damage total to multiple enemies in a single turn. Since he does not take much damage in return, foes that can counterattack him will barely hurt him. Renewal provides him with the self regeneration that can keep him alive without the aid of a staff ally. Chill skills can also work to target certain stats of the enemy team for your allies to exploit. The preferred inherited Chill skill is ultimately up to the player as all versions of Chill skills have their benefits.

Merlinus - Cheery Merchant
"Merlinus opened a shop in Ostia, but it was forced to close. He plans on re-opening with some aid from Lord Eliwood himself."

Merlinus and Marcus
"The merchant Merlinus began working for Eliwood. He and Marcus were fast friends, and when Marcus became the head of military training, Merlinus used his business acumen to deal with all matters financial."

Merlinus is illustrated in the trading card game Fire Emblem Cipher with the following cards: 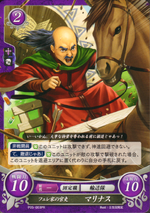 Merlinus is most likely the most worthless card in the game. He is a Cost 2 Unit with 10 Attack and 10 Support, has no Weapon Affinities and no Range meaning he cannot attack, and his only Skills are that he cannot Critical Evade and you can add him back to your hand if you are playing him for some reason and he gets killed. However, he is only available as a Tournament Promo card, so in theory you can maybe get something for him from collectors.

Merlinus is another name for Myrddin Wyllt, a prophet from Welsh legend who is considered the most important prototype for the modern composite image of Merlin. He shares this etymology with Elffin's true name.