風の魔道士, Mage of the Wind

Student at Khadein School of Magic

Chapter 4: Battle in the Lea (Shadow Dragon and the Blade of Light)

Yuri Lowenthal
[view]
“Whilst studying magic in Khadein, I caught wind of a war brewing and decided to seek you out.”
—Merric to Marth in Shadow Dragon

Merric is a playable character from the Archanea Series of Fire Emblem. Called the Wind Mage for the tome of Excalibur that he wields as his weapon of choice during the War of Shadows, Merric is an Altean noble who studies magic in Khadein under the tutelage of Wendell. He is also known to have grown up alongside the royal siblings Prince Marth and Princess Elice, the latter of whom he is in love with.

Merric makes his first formal appearance in Chapter 4 of Shadow Dragon, where he has taken up residence in a village located in the realm of Aurelis. When Marth pays a visit to the village, Merric emerges to greet him, where he reveals that while studying magic in Khadein prior to the events of the game, he caught wind of the unrest taking place in Altea, motivating him into returning in order to lend his assistance to Marth's cause. At this point, Merric has already mastered the tome of Excalibur and received it from Wendell, wielding it in his quest to help Marth bring the War of Shadows to a close.

As Marth's army further makes its advance through Aurelis in order to reinforce Hardin and Nyna in Chapter 5, Merric encounters Wendell on the battlefield, where he successfully convinces his teacher to enlist in Marth's army. Through his exchange with Wendell, Merric learns of the grim news that Khadein has fallen to the Dark Pontifex Gharnef, who quickly enwrapped the city in his pestilent influence.

Merric goes on to help Marth end the War of Darkness, thereafter returning to Khadein with the intent of furthering his magical studies.

However, as a result of the chaos that Khadein was subjected to during the War of Darkness with the deaths of Miloah and all of its important pontifices under Gharnef's hands, the city is hard-pressed to undergo major reconstruction in the wake of the war, and Merric is inevitably called upon to lend his aid to this cause. Under the orders of the newly-appointed Archmage Wendell in Downloadable Episode 1 of New Mystery of the Emblem, Merric sets out to investigate a set of ruins littering the outlying desert, ones that are said to be the site of some mysterious rituals that are orchestrated by Gharnef. Accompanied by Linde, Arlen and Etzel and later Michalis and Phina, Merric cautiously picks his way through the ruins, inhabited by the heretic bishops who remain steadfastly loyal to Gharnef. After the heretic bishops are defeated, Arlen directs Merric's attention to a magic circle located in the heart of the ruins, pointing out its pattern and the presence of offerings strewn around it. The conclusion that the heretic bishops had been attempting to resurrect Gharnef prior to the group's arrival is thereafter drawn, and Merric and Arlen then split up to weed out any remaining stragglers. Unbeknownst to Merric, the apparition of Gharnef manifests before Arlen, planting within him the seed of doubt that will later prove instrumental in his later revolt against his companion.

Prior to the beginning of the War of Heroes, Gotoh entrusts Wendell with the task of relocating the Starsphere Shards, and the city of Khadein is thence entrusted into the joint custodianship of Merric and Arlen.

Chronologically, Merric first reappears in Prologue V of New Mystery of the Emblem, where he returns to Altea under the behest of Marth to act as an instructor to new recruits. He stumbles upon the 7th Platoon preparing to halt a bandit assault on several outlying villages, and immediately joins the fray, helping to quell it. Merric then continues to aid the 7th Platoon until its members are formally inaugurated as knights of Altea, thereafter returning to Khadein.

In Book 2 of Mystery of the Emblem, as Marth's army attempts to enter the domains of Khadein in Chapter 9, Arlen leads the Khadein Mage Corps in ambushing them, first instructing Yodel to direct a small force to bar their entry before attempting to kill Merric in Chapter 10. Saved in the nick of time by the entrance of Marth's army, Merric once again pledges his loyalty to Marth by enlisting into its ranks.

Later in Chapter 24, Merric is permitted to join the battle against Medeus, where he proves to be instrumental in rousing Elice from the reverie that she had been placed under. Medeus is felled by Marth shortly after all four noble priestesses are rescued, and following the termination of the War of Heroes, Merric presumably weds Elice formally, by extension becoming Marth's brother in law, before establishing a magic academy in Pales in Archanea's capitol, where he assumes the position of a teacher.

Merric is portrayed as an amicable character who delights in forming camaraderies with the people whom he encounters. This can clearly be observed following Linde's enlistment into the Archanean League in Chapter 11 of Shadow Dragon, where he, assigned the task of looking after her, is quick to form a strong rapport with her, immediately engaging her in a conversation that involves the discussion of various topics that encompass his time as a student in Khadein and the superiority of mages. His relationship with Arlen also proves as much; throughout the interactions that both characters share, it is evident that in spite of the Arlen's persistence in maintaining a detached, aloof disposition in response to Merric's friendly advances, Merric is unfazed, never giving up in strengthening the platonic bond that they share.

Through his attempt to befriend Arlen, however, Merric has also been portrayed to be one who has the tendency to be naive to a fault, where his inclination to believe that everyone is intrinsically good at heart causes him to be impervious to the presence of negative feelings that may be brewing beneath their exteriors. His interaction with Arlen in Chapter 10 of Book 2 of Mystery of the Emblem proves this, as it sees him expressing genuine bewilderment and shock in response to Arlen's jealousy-induced display of antagonism, unable to comprehend the reason for his fellow disciple's hatred of him.

Merric has also been portrayed as a devout, passionate lover. After Elice is rescued from the Tower of Thabes at the end of Chapter 23 of Shadow Dragon, for one, Merric is observed to break his usual demeanour of calm by reacting in a flustered, excited manner in his relief, thereafter announcing his desire to protect her from coming under harm. He behaves in the exact same manner when attempting to free her from Medeus' control in Chapter 24 of Book 2 of Mystery of the Emblem, where he, in an agitated state, frantically begs her to awaken while blaming himself for having failed to protect her.

Merric's base conversations with Linde in New Mystery of the Emblem reveal him to be one who is studious, possessing an unslakable curiosity to unravel the mysteries of magic. His first conversation with her sees him examining her personal tome of Aura, a tome that is exclusively locked to female magic users, attempting to figure out how such user restrictions are imposed. He then produces a thesis for Linde to review, a clear indication of his steely determination to devote himself to his magical studies in spite of the warfare that he actively engages in.

It is also through his unveiling of this thesis that Merric is revealed to be an extremely humble person; in spite of his academic merits, he does not view himself as having perfected his craft, as he urges Linde to provide him with her opinion on said thesis after reading it. Merric's humility is further evidenced through his base conversations with Kris, where, in response to Kris praising the suitability of him possessing the tome of Excalibur, he informs them that he only became its owner due to sheer luck, and that it could very well have chosen Arlen instead of him.

Merric is a very powerful Mage, possessing fairly balanced stats that is complemented by his slightly above-average HP and Skill. His main issue takes the form of his poor Defence, and because of this, it is not advisable to field him as a frontline unit. He often makes up for this when serving as backup to main forces alongside Archers and Snipers, or behind a strong defender like a Knight.

In Shadow Dragon, reclassing Merric into either a Swordmaster or a Paladin after raising him as a Mage is commonplace. This increases his Movement, Speed and Defence, and his Resistance and Magic will stay quite high due to his level-ups as a magic-based unit. Giving him a Levin Sword will allow him to take advantage of his Magic stat, making him an effective multi-purpose unit. However, in terms of sheer power, he is stronger as a Sage.

In New Mystery of the Emblem, Merric is worse than in the original games, but he still has a few strengths. Merric can be used in the prologue, giving him a bit of a push in experience, but it should be noted that he will level up slowly due to his high base level, and inability to double reliably in higher difficulties.

When he returns for the main game, Merric is unlikely to be as good as a trained Linde, who has access to Aura and Nosferatu due to being a female mage. Aura, in particular, can be used by Linde regardless of weapon rank (other female mages can wield it if they reach B Rank in tomes), but Merric also has a big boon himself; in the form of the Excalibur tome he comes with, which is effective against flying units like the much-dreaded Wyverns. Much like Linde regarding Aura, Merric can wield Excalibur regardless of weapon rank, and, alongside Etzel, who can also wield Excalibur due to his B Rank in tomes, will be very useful in Chapter 11, which is swarming with high movement Wyverns. On top of this, neither Merric nor Etzel will get movement penalties on the desert in chapter 11, due to them being in a magic class.

His bases in relation to his level are not the greatest, but like a good part of the game's characters, he has very high growths. Outside of the prologue, he won't level up as slowly due to the enemies being at around the same level as him. A trained Merric in his base class generally boasts high HP, Speed, Skill and Luck, but his Magic and Resistance will be rather low for a magic user. Another important thing is that Merric can recruit Elice in the Final Chapter; he must be deployed if the player wants to save all 4 clerics.

Merric may not be outstanding in New Mystery of The Emblem, but the utility he provides on his own makes him worth considering.

"He buried his feelings for Princess Elice and once again returned to Khadein."

"At Pales’ magic academy, he taught sorcery to the youths."

"After helping Marth stamp out the fires of war, Merric returned to Khadein where he continued his magical studies."

"Merric built a magic academy in the palace, spending his days teaching the youth. His friendly personality earned him the love of his students."

Merric is illustrated in the trading card game Fire Emblem Cipher with the following cards: 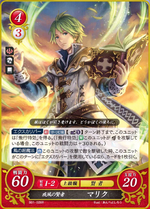 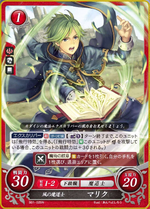 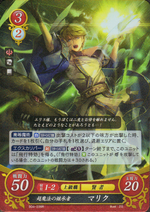 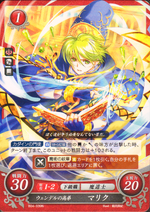 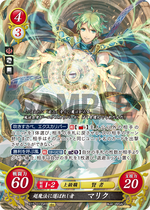 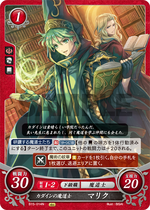 Merric's name in katakana (マリク Mariku) can also be translated as 'Malik', an Arabic word which means 'king'. This is befitting, as he wields the Excalibur tome, which is in turn inspired from the mythical blade wielded by King Arthur of the Round Table in Arthurian yore.