Member of the Greil Mercenaries

Mia is a playable character from Fire Emblem: Path of Radiance and Fire Emblem: Radiant Dawn. She is one of the members of the Greil Mercenaries, and works as a sell-sword.

In Path of Radiance, Mia is a mercenary hired by Crimea, and is captured by Daein soldiers. As a result of being set free by Greil, she joins his mercenary band to pay off her debt, but remained with the mercenaries. Mia's training tends to be rather extreme, with her attempts to spar with others being rather aggressive in nature, whereupon she convinces Rhys to stand by her side in order to heal any wounds she may receive. She is most likely Ike's preferred sparring partner, as she tends to not complain about the fact that he never holds back during their training sessions, even seeming to enjoy them. After the defeat of Ashera, Mia sets off on a journey around Tellius in search of new opponents, occasionally stopping by Greil's retreat to rest.

Mia can be described as energetic and quirky. She is obsessed when it comes to proving the strength of her mettle, a fact that surfaces prominently in her support conversations, where she will often run around and challenge the first person she sees to duels. Despite her eccentricities, she has a heart of gold, willing to lend her aid to people who need it. For instance, her supports with Ilyana sees her attempting to look after the mage because the latter is fatigued from her usual hunger spells. Also, one of her training sessions with Rhys has her ardently forbidding him from practicing with swords when she sees that doing so makes him ill.

Mia is stalwartly opposed to the backdated viewpoint of women being unsuited for the battlefield, training rigorously every day to disprove this notion. This belief of Mia's has had a major influence on her being quick to accuse male duelists of going easy on her or assuming that her prowess as a swordswoman is inferior due to her gender. This is proven through her supports with Largo, where she takes deep offense over the man suggesting that she is better suited to doing something domestic instead of taking to the battlefield with a sword in hand.

Mia joins relatively early on, and her high base speed practically guarantees she will be doubling all but the fastest enemies. However, she is held back by her relatively low Strength, as well as her bad class. She will often not do much damage to enemies even with 2 attacks. While a 40% growth is by no means bad, it's low enough where it has trouble salvaging her base, meaning she will continue to have lackluster attacking prowess throughout the game. It also doesn't help that she only starts with D Swords, meaning she will struggle to hit C by the time Zihark joins with the Killing Edge. It also means that the most powerful weapon she has access to, the Steel Sword, weighs her down by 5 points unless weight is forged off of one. This means that early on she will often have to choose between double attacking and doing a notable amount of damage per hit. Being locked to swords in general can be crippling in a game like PoR. Since most combat happens on enemy phase, the inability to retaliate on and kill units with magic, bows, hand axes, or javelins can make certain maps take much longer than necessary. Her damage output flaws can be mitigated through the use of an Energy Drop, the Adept skill, and/or the chapter 21 Brave Sword. However, considering she is not mounted and has no reliable 1-2 range, many will not consider her worth this investment.

Mia's Strength and Defense growths are well balanced in Radiant Dawn, and her Skill, Speed and HP are by far her best stats. Her Luck is also decent, but due to the cap of 35 and the growth of 35% it will most likely not cap. She'll have an easy time capping HP, Skill, and Speed, giving her great Bonus Experience potential, allowing her to improve her already decent Strength and Defense. Curiously (and also somewhat funny) is that if she caps Defense as a Swordmaster, the +3 promotion bonus will cause it to be immediately capped as a Trueblade. This gives her inherent bonus experience potential as a Trueblade, and will cap HP soon after, and Speed and Skill following shortly after as well, allowing her to improve her Strength, Luck, and Resistance, which all have decent to high caps. Overall, Mia, due to her high availability and high growths, is the best of the Trueblades, with a trained Edward or Zihark being her most prominent competition. Lucia usually is worse in every stat except Skill and Resistance in comparison to Mia, and the skill is only marginally higher. Mia can be brought into the Tower of Guidance and can wield the Vague Katti, and due to her dodging capabilities and decent durability, will be a useful asset throughout the game.

Lady of Blades
A mercenary fighting to improve her sword skills. In life, she doesn't sweat the details. Appears in Fire Emblem: Path of Radiance.

Moonlit Witch
A mercenary fighting to improve her sword skills. She can't wait to get to the harvest festival. Appears in Fire Emblem: Radiant Dawn.

Harmonic Blades
Young swordmasters Mia and the ever-masked Marth. What destiny does summer hold for the two of them? They appear in Fire Emblem: Radiant Dawn / Awakening.

Mia is illustrated in the trading card game Fire Emblem Cipher with the following cards: 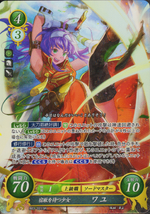 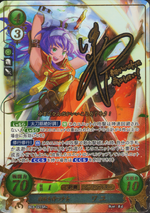 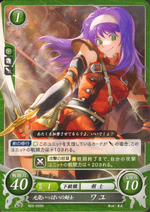 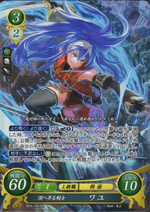 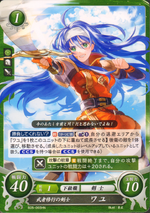 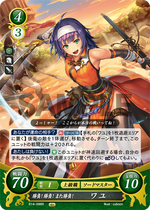 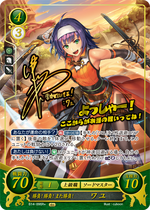 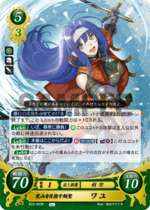 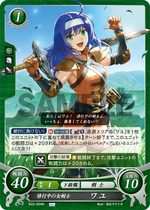 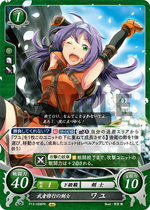