Micaiah's Pyre (ミカヤの神炎 Mikaya no Shinen, lit. Micaiah's Divine Flame) is a Magic tome introduced in Fire Emblem Awakening. Originally wielded by Micaiah in Champions of Yore 3, this tome may be obtained as a random item from the Barracks or by stepping on an event tile. 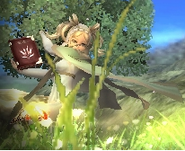