Chapter 22: A Knight-Filled Sky (Shadow Dragon and the Blade of Light)

Chapter 21: The Wyvern's Dale (New Mystery of the Emblem)

Chapter 22: The Dragon's Table and Downloadable Episode 1: Wind and Thunder (New Mystery of the Emblem)

David Vincent
[view]
“Don’t be a child. There are no right paths; just mine and yours, two that will never cross.”
—Michalis to Minerva in Shadow Dragon

Michalis murders his own father, King Osmond of Macedon, because he believes that he was a weak ruler and allowed Archanea to push them around. It is also implied that Gharnef might have played off Michalis's ambitions. He is eager to prove that Macedon is the strongest nation on the continent of Archanea and has the right to conquer every other country, thus he agreed to form an alliance with the Dolhr Empire. Noticing the possibility of conflict with Minerva, he manipulates Maria into being captured by Grust, which uses her as a hostage against her older sister. However, he feels remorse for this, despite his lack of such for killing his father. He originally plans to fight against Dolhr once Macedon becomes the most powerful nation, but he loses sight of this goal the longer that he works with them. When Matthis first meets Marth in Shadow Dragon, he initially believes that Marth will kill him because Michalis "puts the most scared-looking soldiers on the front line for a reason" and kills those who defy him. However, Michalis is tolerant with Gotoh, who continues to warn him that he is walking on the path of destruction. He finally faces Minerva in a battle that results in him becoming badly wounded and being presumed to have died.

However, Michalis can survive in Fire Emblem: New Mystery of the Emblem by having Minerva wait one turn on the village he is in, followed by having Marth visit it. Due to his sheer will, Michalis is able to recover and join Marth's army. After the war, accounts say that he either resumed his position as King of Macedon, or later becomes the king of a country on a different continent.

Michalis's Iote's Shield nullifies his main weakness of bows and the Excalibur tome, meaning the player will have to kill him the hard way. Fortunately, he has not lost his weakness of low Resistance, making him feasible to take down, though one-rounding him without a crit is tricky. A strong mage, such as Linde with Aura, Boah with Thoron, or a raised Merric, should be able to take a large chunk out of him. Bombarding him with the Thunderbolt is also a potential option.

In a sea of extremely poor-quality lategame units, Michalis stands out as one of the few who can actually hold his own. He is fast, strong, and tough, and has the weapon ranks and statline to function in a variety of classes, such as Paladin, Hero, Berserker, or his base Dracoknight class. He cannot use A-rank weapons, but he can use silver and brave weaponry well enough, or make use of the high base rank of Swordmaster. Lunatic Mode enemies can give him some real trouble, but he tends to be able to face them when reclassed properly or given a Rainbow Potion dose. Even his growths are fairly good.

That said, Michalis has one very significant weak point: his Luck. His 2 Luck is some of the lowest of any recruitable unit, and though Luck is often thought of as an unimportant stat, Michalis joins so late with such low Luck that many enemies will have a considerable crit chance on him. A number of later enemies are even Swordmasters and Berserkers, pushing the chance from worth considering to downright likely. Because of this, if the player is to make use of Michalis, he should probably be a major recipient of Goddess Icons, to avoid him facing an abrupt end.

Ambitious King
King of Macedon who had great ambitions for his country. Murdered his father. Brother to Minerva and Maria. Appears in Fire Emblem: Mystery of the Emblem.

Michalis is an early Book I Grand Hero Battle Axe Flier unit who has unfortunately fallen off overtime due to the plethora of better units available at the time and with time. His worth comes from being a physically bulky mobile unit thanks to the freedom of movement of being a Flier unit and a modest physical bulk score of 78. He does have a solid Atk stat as well at 34 neutral allowing him to hit decently hard. Unfortunately a mixture of mid-low Spd at 26 and a low 19 Res leaves him vulnerable to mages and most fast units in general. While Michalis may not been groundbreaking by any means, he can ultimately be a solid tank under the right circumstances, though he needs a lot of outside help to reach that level.
He shares the Hauteclere Axe with his sister, thus sharing the same effect of accelerating his special cooldown. When refined with its effect, he deals an additional 10 true damage on top of his special skill damage when it activates, leading to some explosive damage.
Blazing Thunder deals damage equal to 1.5x of his 50 Atk to enemies within an Area of Effect calculcated against their Def stat. He can deal significant damage with it, but does not apply the Hauteclere Refine bonus damage. Iote's Shield removes his weakness to Bows and other flier effective weapons, making the former less of a threat and improves his overall physical bulkiness. It can be substituted into his Seal Skill, but it is perfectly fine remaining as is. Threaten Defense inflicts Def-5 on foes within two spaces of Michalis at the start of his turn, softening them up for him to dispatch if possible.

Iote's Shield will solve Michalis's weakness to flier effective weapons, namely bows, but if he replaces that, they do become a point of contention, especially from several high damage ones like Klein, Bridal Cordelia, Brave Lyn. Merric is a powerful counter as well due to Excalibur's effectiveness against fliers and being a magic attack exploits his lower Res. Red Tome users in general are powerful counters to him regardless if he has Iote's Shield. Celica, Tharja, and Katarina make solid counters against him.

Aside from his Axe, Michalis practically needs a complete kit overhaul starting with Reposition to fill his empty Assist skill, which this one has perhaps the best applications to ensure that he can move allies out of danger or put him in place of an ally to defend them from a unit he can counter. Bonfire is a quick charging special that can deal a solid 18 true damage off of his Def and Hauteclere will turn it into a 28 damage special on top of his calculated damage. Steady Stance will innately boost his Def as a defensive unit and can be inherited with Reposition from Silas for cost effective inheritances and Iote's Shield can be moved to his Seal Skill to keep that weakness removal in play if needed. Quick Riposte ensures that he gains a Follow-Up attack if the enemy initiates combat onto him. Distant Counter can also be considered if he is going to fully focus on being an enemy turn character. Skill C is flexible enough to take other skills better suited for him, mainly Smoke skills like Defense Smoke to achieve similar effects to Threaten Defense but activates in response to an attack rather than waiting for an ally to be in his range at the start of his turn.

“Damn you, Minerva! I will not be put down! Now, quake in terror before my wyvern knights!”
—Michalis's pre-battle quote in Shadow Dragon and the Blade of Light

“Made it this far, have you? Don’t gloat yet. My Dragoons and I still rule these skies!”
—Michalis's pre-battle quote in Shadow Dragon

Vs. Catria, Est or Palla

“Aaagh! I am finished. Forgive me, my people.”
—Michalis's death quote

Renewed Prince "Accounts are conflicted about Michalis after the war. Some said he ruled over Macedon once again, while others claimed he departed to conquer another continent."

Michalis is illustrated in the trading card game Fire Emblem 0 Cipher with the following cards: 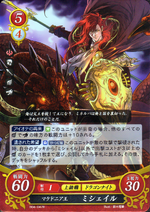