Paladin
[view]
“By 'we' I mean Archanea. Archanea is saved. If Princess Nyna has truly come to chase the enemy from our halls, to free us...Then my death will have meaning.”
—Midia to Boah in Fire Emblem: Shadow Dragon

Midia is a playable character who appears in Fire Emblem: Shadow Dragon and the Blade of Light, Fire Emblem: Mystery of the Emblem, Fire Emblem: Archanea Saga, and the remakes. She is a knight of Archanea and the lover of Astram.

According to the Takayashiki Hideo's Mystery of the Emblem novel adaptation, Midia is 23 years old. [1]

Midia is the daughter of Marquess Charon of Deil, which is a powerful noble house in Archanea. When Dolhr rises to power, some of the other noble families betray Archanea to side with the Empire. After her father is killed and Deil is seized by Dolhr, Midia continues to fight back, but she is ultimately captured and imprisoned in Archanea Castle alongside Boah, Tomas, Dolph, and Macellan.

During Marth's liberation of Archanea Castle, she is rescued and joins his army. Later in the story, she meets Astram on the battlefield and recruits him to the army. During the events of Fire Emblem: Mystery of the Emblem, Midia leads a rebellion against the crazed Emperor Hardin. However, her rebellion is crushed and she is imprisoned in Archanea Castle to await her execution. When Marth's army arrives at the castle, she calls out Hardin on his actions fueled by jealousy and demands to know Nyna's whereabouts. During the resulting battle, she is rescued and joins Marth's army once again.

Midia is very passionate about her relationship with Astram, as well as her service to her country. It is revealed that much of her life is centered about Astram and they are considered to be the "perfect couple" because of how madly in love they are with each other. She is also willing to die as long it benefits Archanea.

Midia's base stats are quite similar to those of Jagen, but she distinguishes herself from him largely due to having much higher growth rates. Due to the game's XP mechanics, she gains levels at the same rate as her fellows, making her growths actually significant. While she doesn't stack up well against a trained Cain, Abel, or Hardin, her base Weapon Level and Speed do enable silver weapon use and is sufficient to double. Paladin is one of the best classes in Shadow Dragon and the Blade of Light, meaning that Midia can largely stay useful by way of her class alone, due to its high Movement and multiweapon access. Midia will generally not be your best unit unless heavily invested in, but her class and general parameters make her extremely serviceable.

Though she will be spending most of her availability unhorsed, Midia is fairly good at base level. She is fast, strong, and has high Defense, while having the ability to use a Wyrmslayer to take on dragons. She may want an Angelic Robe, as her HP is quite low, but she can hold her own, though she is unlikely to be particularly impressive.

Though some of Midia's good points remain intact, her lance rank has suffered since her NES days. She can use Ridersbane, but her lower weapon rank means she cannot use silver weapons. She can act as a serviceable Dracoknight, but between Hardin, Jagen, Caeda, Minerva, and Abel, the player is likely to have better options. She tends to be more or less a filler unit, as while her growths are fairly good, they do not compensate for her base stats.

By the very low standards of New Mystery's lategame prepromotes, Midia is actually fairly strong. She has relatively high Speed and Strength, as well as a workable sword rank, meaning that she can pull tolerable work as a Swordmaster. That said, she tends to be very lackluster next to a well-trained unit in that class, meaning she should not be resorted to unless the player's army is in a very poor state.

Midia: Boah, the people in the castle are panicking. What exactly is going on?
Boah: Hmm, perhaps Nyna has brought the liberation army here.
Midia: Huh, really? Then perhaps we can be saved.
Boah: But, Midia, we can't get complacent right now. If this continues, the enemy will decide to finish us off. Without weapons, we’re sitting ducks.
Midia: But, Boah. We've finally chased the enemy away from Archanea. Even if we die here, we should have no regrets.
Boah: Haha... You’re still so strong. Still, if you die, Astram will be very sad.
Midia: .....Yes... I just want to see him one last time. That is my final wish.
Boah: Well, Midia, for that wish you must endure to the end. You mustn’t give up.

Midia: Astram! Why are you here...?
Astram: Midia? Is that you, Midia? Are you alright? It’s great... to see you again.
Midia: Ah... Astram. You didn't know. The Altean army has already liberated Pales. We hostages were all freed, and now we’re fighting together with Altea. So you don’t need to help the enemy anymore.
Astram: Really? That’s great. In that case, I want to try my hand at challenging Doluna once again.
Midia: Mmm, from now on we’ll be together. I’ll definitely not leave your side again.

Marth: Jagen, it seems we've finally crossed the peak. Pales isn’t far from here.
Jagen: Yes, if we go down from here, we will reach the capital of Pales in an instant. Also, your highness, I just received news of an attempted coup in Pales. The knights and civilians who opposed Hardin’s actions rebelled against him. It seems their leader was Lady Midia.
Marth: What! Midia...? What happened?
Jagen: Unfortunately Lady Midia was defeated, and was captured... Each day many people are executed. It is only a matter of time before Lady Midia shares the same fate.
Marth: Hardin... I can't believe that he would do that. Alright, let’s go and rescue Midia! We must hurry to Pales and end this once and for all. Jagen, let's go!!

Hardin: Midia, even you betrayed me. Archanea’s paladins have lost their touch.
Midia: You fool!! Don't you see it? What you're doing isn't normal. Where did you take Nyna to? Bring her back to us now!!
Hardin: Nyna! That woman betrayed me. I just wanted to destroy Grust. And she had to go and give the Emblem to that boy... Those who betray me must die. Midia, you’re no exception!!
Midia: If you want to take my life, go ahead. But, Hardin... Do you know how much suffering you’ve caused because of your stupid jealousy? Just open your eyes and see!
Hardin: Stupid jealousy...? Haha... You can say what you like. This world is corrupt and full of annoying people. Is this kind of world even worth anything? It would be far better for it to be destroyed. Midia, you shall watch here... As Prince Marth dies by hand!!

Midia: Bishop, what do you make of this? I hear shouting in the corridors.
Boah: Hmm...Princess Nyna must have returned with an army in tow.
Midia: An army?! Really? Then we are saved!
Boah: Saved, perhaps...or doomed. Surely the enemy realizes we are more trouble alive than dead now.
Midia: You do not take my meaning, Bishop. By "we" I mean Archanea. Archanea is saved. If Princess Nyna has truly come to chase the enemy from our halls, to free us...Then my death will have meaning.
Boah: Ho ho...I admire your spirit, child. I always have. But think how Astram would grieve if you were to die.
Midia: I...I had hoped to see him one last time- to say goodbye. That alone I regret.
Boah: Ah, but you have not died yet. Midia. Hang on to hope.

Midia: Hello, my lover.
Astram: Midia...? Midia, my sweet! Can it really be you? I feared you were dead.
Midia: Oh, Astram! How could you not have heard? Archanea is free! The Altean army came, and liberated the palace along with all the hostages within! Now we fight as one. Come with us, Astram! You needn't dance to Doluna's fiddle any longer.
Astram: I've a mind to break their fiddle, for all the evils they have wrought..
Midia: Now you can. We can take them together.
Astram: That we can. ...Midia. I am sorry I left you alone. I will not make that mistake again.
Midia: No, you certainly won't. Now that I have you back...you'll find me exceedingly reluctant to let you go.
Astram: Ooh... Yes, I can see that! Just take care you don't crush me instead of Doluna!

Boah: Midia, command your subordinates to guard the princess.
Midia: Yes, please leave it to me.
King: Boah, after this, I must go.
Boah: Right.
Narration: For Nyna to escape, Boah, along with a few knights, left the throne room to walk about the castle. However, in their attempt, they were forced into a secluded room by pursuing Empire soldiers.
Doluna soldier: Remnants of Archanea's "top" military, hiding in such a place? Give up already! If you obey, we might spare you lives.
Boah: Muh... what the... oh! Princess Nyna, you're conscious?
. Nyna: ... where...?
Boah: A room in the Palace. Unfortunately, we're under siege by the Imperial Army. My judgement seems to have lapsed. Princess, in listening to my superiors, I have disrespected you. I'm terribly sorry.
Nyna: Don't be. I was acting childish. I should be the one apologizing. So, Bishop, what should we do...?
Boah: Regrettably, we'll have to surrender now. I'll negotiate with them so they won't touch you...
Midia: Boah! Surrendering without a fight? That pisses me off! I can't stand surrendering to these people.
Boah: Don't be so selfish, Midia. Are you going to let Nyna be caught in the skirmish? The princess is the last hope for the people of Archanea. If something happens to her, what excuse would we have?
Midia: ... that's true. I'm sorry.
Nyna: Bishop. I sympathize with Midia. Even if we're destined for ruin, I want my last minutes to be noble. If Midia and the rest fight, I want to entrust my hope to them. Bishop, please understand.
Dolph, Macellan, Tomas: Right!
Midia: This is important, everyone, so let's go! We'll show the empire that the Archanea are real knights!

By Nyna’s request she remained in the army and became the captain of the Archanea knights.

She joined the Archanea free knights, to serve her people.

Midia honored her princess's request to remain with the Archanean Knights, and later became their captain.

"Midia joined the Archanean Rangers, devoting her life to serve her people. Never did she lose her sense of justice."

Midia is illustrated in the trading card game Fire Emblem Cipher with the following cards: 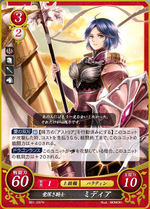 Midia could be an alternate spelling of Medea. Medea fell in love with Jason who eventually left her for King Creon's daughter, Glauce. Medea then killed Glauce by sending her a poisoned dress before Medea killed her own children in order to both save them from slavery and spite Jason.