Arch Knight
[view]
“None of us are going anywhere, my lady. We're here for you till the very end. Even if it means our lives.”
—Midir to Edain in the Prologue of Genealogy of the Holy War

Midir is a playable character from Fire Emblem: Genealogy of the Holy War. He is an archer knight of Yngvi who harbors a crush on Edain. He is grievously wounded in the Prologue during his attempt to protect Edain from Munnir. He will enlist in Sigurd's army when the latter retakes Jungby, determined to save Edain and atone for his inability to protect her from harm. He will eventually perish in the Battle of Belhalla, alongside several of his fellow comrades.

According to unofficial manga-based statistics, Midir was born in Gran 736. He stands at 182 centimeters in height, weighs 70 kilograms, and his blood type is A.

MIdir, at first glance, is a relatively unimpressive unit in combat due to his average starting stats, poor overall growths, lack of holy blood, and weak enemy phase potential due to a lack of access to a 1 range weapon. He is, however, a useful unit in the first generation due to the simple fact that he is mounted and the maps in Genealogy of the Holy War are so large that being on foot often means missing out on combat unless you want to risk letting villages burn, getting a lower ranking, or letting recruitable characters die. It is by the sheer utility of high movement that Midir does more good than harm, especially when the combination of Pursuit and Charge allows for him, if lucky, to do a maximum of four attacks if the proper conditions are met.

Though Midir is often overlooked due to his inferiority in combat when compared to Jamke and Brigid, there are ways to boost Midir's offensive potential to close the gap. Notably, Jamke has an overkill of offense: Pursuit, Adept, Charge, and a Killer Bow. You will find that even if you insist on using Jamke despite him being on foot, that his offense is so explosive that he really does not need his Killer Bow to kill almost any unit in the game. Midir, however, will make much better use of it due to his superior mobility. A good option is to sell Jamke's Killer Bow to Midir and have Jamke buy the Steel Bow and later purchase a Silver Bow from the Armory. Also, if you choose to pair Midir with Edain by Chapter 3, she can give him a Brave Bow in Chapter 4 that seriously ups his potential. Using these options significantly improves Midir's capability as a unit, though his lack of 1 attack range even after promotion will limit him considerably compared to other mounted units.

Midir is a pretty unimpressive father, and he only has one real choice that he was intended for: Edain. Pairing him with anyone other than Edain will result in him being unable to pass on his Bows. The skills he can pass down, Pursuit and Charge, are fairly ubiquitous among male units so they are nothing special for his children to inherit. He has no Holy Blood, and he has the worst overall growths of all males in the game, though they do have the benefit of being evenly split.

While there are several other choices that are "safe" for choosing as Midir's wife(in that his children will be guaranteed Pursuit and evenly split growths), just about anyone else is a better choice than Midir since he really offers nothing special to them due to his common skills, inability to pass on his weapons, and poor growths.

In Chapter 1, if Midir speaks to Edain, she will gain 100 love points with him.

In Chapter 3, if neither Midir nor Brigid has a lover, he may speak to her, resulting in her gaining 100 love points with him.

In Chapter 4, if Edain and Midir are lovers, she may speak to him, resulting in him receiving the Brave Bow.

In Chapter 5, if Brigid and Midir are lovers, she may speak to him, but nothing will result of it.

Midir is illustrated in the trading card game Fire Emblem Cipher with the following cards: 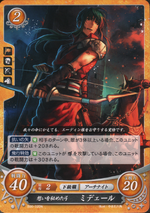 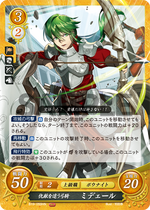 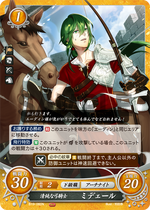 In Irish mythology, Midir was a prince of Tuatha De Danaan and the husband of Fuamnach. Once he set eyes on Étaín, he fell in love with her, causing Fuamnach to harm Etain out of jealousy. When Etain was reborn, she had no memories of before and married another. Midir discovered this and hastened to her, only to find that she would not leave her husband, but if he gave her to Midir, she would go with him. Midir concocted a plan to get her back, and succeeded, but her husband saw through a ruse and took Etain and their daughter back with him.