Midori is a playable character in Fire Emblem Fates.

In her Paralogue, Midori had just returned from an expedition to gather a Dragon Herb when she is attacked by a bandit. However, Kaze makes an appearance and swiftly deals with the would-be thief. Happy to see her father, Midori tells him that she had retrieved the herbs. However, as she searches her gear, she finds that the Herbs are missing. Desperate to find them, Midori runs off and encounters Candace, who had swiped her herbs.

Thankfully, Kaze and the army take Candace down and retrieve the stolen goods. When Kaze scolds Midori for putting her life in danger for the herbs, Midori tells him that she was so desperate to retrieve them because the Dragon Herb could supposedly grant wishes. Kaze still believes that it would have been better to wait for the herbs to grow again a year later, but Midori wanted to prove that she was useful, rather than waiting a year to do so. Realizing that he did not fully understand his daughter, Kaze apologizes for leaving her by herself for so long and decides to bring Midori into the army. Happy, Midori finally has the wish she had hoped to fulfill with the herbs: spending more time with her father.

Midori loves to make medicine and has a curious mind, making her a natural researcher. Coupled with her polite and down-to-earth personality, she is an honorable student. She often spends her time gathering precious herbs and other materials to create special tonics for the army to use. She will go out of her way to help out people by creating specific blends for them, even accommodating their special needs such as making a beauty cream for Forrest and creating a blend for Kana's dragon specifications. Midori never settles on her blends and is always looking to improve her formulas so they have the absolute best outcomes possible.

Her tonics are sometimes known to have very unpleasant odors. Most of this is result of some incredibly unusual ingredients and has been known to use insects sometimes in her tonics, such as in her support with Ignatius. Midori does not take rejection well in general and sometimes cries when people refuse to take her medicine. Nonetheless, Midori always brews tinctures with the best intentions and are extremely effective once the drinker finally ingests it with no negative side effects aside from initial taste. She has the most acute sense of taste to help her with her brewing, which makes her even more effective in her craft.

Midori adores Kaze and likes to brag about him whenever the opportunity presents itself. She usually keeps her desires to spend time with him to herself, as she does not want to impede with his line of work. Deep down though, she values any time the two are given to be together and she enjoys making brews for him the most.

Midori's two promotion options are the Merchant and Mechanist classes. Merchant provides more supportive skills and introduces the ability to use Lances and Naginatas to give Midori a close-up method of attack. The Merchant class does not particularly shine in any particular field, but with the solid defensive stats, Midori can perform as a decent wall with some interesting quirks from her class skills. She first learns Profiteer, allowing Midori a chance to generate Gold Bars. The activation rate is based on her Luck stat, so it receives the bonus from Lucky Charm, making Midori a great user for this skill if needing to generate Gold Bars for money. On Conquest, this makes Midori a solid, reliable way to get that much needed funds without the assistance of DLC. However, these gold bars also fuel the second skill in her class set, Spendthrift which gives her all the benefits of the Life and Death skill, without giving her foes the same benefits, all at the expense of one Gold Bar. If wiling to stockpile gold for this skill, Midori can perform as a solid front line wall so long as she has a healthy supply of them. Mechanist introduces Shuriken to her weapon repertoire, allowing her to apply stat debuffs to her enemies while giving her a 1-2 range weapon to prevent close quarter combat situations. Mechanist provides Golembane mainly for My Castle battles with Puppet, Golem, and other Mechanists as well as a few select chapters and PvP against units with Replicate, which Midori can also learn from this class. Replicate allows Midori to be in two areas at once, allowing her to spread her supportive skills across the map and activate Profiteer more often if needed. Because Midori has Ninja as her secondary class, promoting her to Mechanist will let her learn Locktouch and Poison Strike as you level, or immediately upon using her Offspring seal.

Midori can achieve an A+ Support with Selkie, Ophelia and female Kana. All three are available in Revelation.

Reliable Chemist
Daughter of the stalwart Hoshidan ninja Kaze. An expert when it comes to crafting balms and poultices from medicinal herbs. Appears in Fire Emblem Fates.

Forgoing her inherited Spd that she and her father are known for in Fates, Midori is slow for most standard bow units. However, her most notable feature is her incredible 41 neutral Atk and a modest 34 Def which gives her a physical bulk score of 75 on top of her 41 HP. While her Res leaves little room to make her a mixed tank, Midori's capabilities as a physical wall, especially as a Red Bow Infantry, cannot be questioned.
Her Spendthrift Bow increases her in-combat capabilities as she gains +7 Atk while her opponent takes an Atk -7. While it carries a heavy penalty of +2 to her special cooldown after combat (though this cannot exceed its maximum charge), the increased damage she deals and the reduced damage she takes heavily outweigh the con - Midori effectively has a hidden 60 Atk and 41 Def out of the box and is fully capable of activating short-charge Specials with some minor tweaks.
Midori can buff allies by using her Rally Atk/Def+ to give the ally +6 to both. Close Foil grants her an additional +5 Atk/Def during combat if she is attacked by any physical weapon and can counterattack against all close range physical units as well. Chill Attack forces a -7 Atk reduction to the foe with the highest Atk, which stacks with Spendthrift Bow's effect if she is attacked, enough to cripple some of the strongest units in the game into a pitiful level of damage.

Midori's alarming physical bulk, rivaling even most armor units, comes at the heavy cost of little to no protection from magic as none of her skills give her any sort of boosted protection. As such, most mages can deal critical damage to her, though green mages should remain cautious. Dragons are the only close range units who can attack her adjacently and not worry about counterattacks, as dragons are magic-based melee and do not trigger Close Foil. Blue Dragons such as Legendary Tiki, Female Corrin, and Lilith make nice counters due to color advantage, though the latter should be wary of the effective damage of bows against her. Dazzling Staff/Wrathful Staff units can easily poke her out and even deal lethal damage in a single round if their Spd is high enough as Dazzling Staff negates her counterattacks.

Midori is best not even attempting to cover her weakness and should polish her already monstrous strengths as a physical tank and can be exceptionally powerful as a baiting defensive unit - as such, Spendthrift Bow and Close Foil will always be her Weapon and A Slot of choice. Reposition works nicely on Midori as she can place her ally behind her and take a hit from an enemy in their stead. Noontime is especially strong on her as its cooldown count of 2 can charge quickly in combat, and healing 30% of the damage dealt goes a long way with Midori's raw damage output. Moonbow can also be run if desiring more damage, but should not be the primary choice.
While Chill Atk is a good B Slot for Midori, it is a common inherit as well as a Sacred Seal, so she has much stronger options for those willing to fodder some rare units. Lull Attack Defense negates any of the foe's pre-battle Attack and Defense buffs and inflicts an extra -3 to both stats, further establishing Midori's dominance as a physical tank. Null C-Disrupt is a niche-but-effective passive that negates skills/statuses that prevent counterattacks, which can make Dazzling Staff and Firesweep units think twice before engaging.


Smoke Skills, mainly Attack Smoke or Defense Smoke, are a natural choice for the C Slot and Sacred Seal as Midori will inevitably be doing a lot of frontline tanking, allowing her to debuff and repel many units at once. Threat. Atk/Def is another powerful option, as if an enemy ends their turn near Midori, they will suffer -5 to Atk/Def while Midori's Atk/Def is reinforced by 5.

Midori - Reliable Chemist (しっかり者の Shikkari Mono no lit. Of The Reliable One) 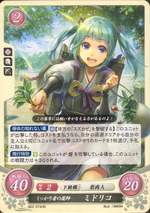 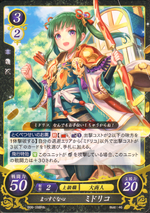 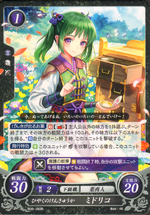 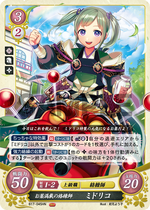 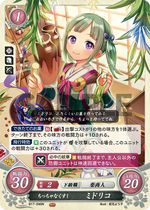