Midori (ミドリコ, Midoriko in the Japanese version) is a playable character in Fire Emblem Fates.

In her Paralogue, Midori had just returned from an expedition to gather a Dragon Herb when she is attacked by a bandit. However, Kaze makes an appearance and swiftly deals with the would-be thief. Happy to see her father, Midori tells him that she had retrieved the herbs. However, as she searches her gear, she finds that the Herbs are missing. Desperate to find them, Midori runs off and encounters Candace, who had swiped her herbs. Thankfully, Kaze and the army take Candace down and retrieve the stolen goods. When Kaze scolds Midori for putting her life in danger for the herbs, Midori tells him that she was so desperate to retrieve them because the Dragon Herb could supposedly grant wishes. Kaze still believes that it would have been better to wait for the herbs to grow again a year later, but Midori wanted to prove that she was useful, rather than waiting a year to do so. Realizing that he did not fully understand his daughter, Kaze apologizes for leaving her by herself for so long and decides to bring Midori into the army. Happy, Midori finally has the wish she had hoped to fulfill with the herbs: spending more time with her father.

Midori loves to make medicine and has a curious mind, making her a natural researcher. Coupled with her polite and down-to-earth personality, she is an honorable student. She also loves her father and likes to brag about him whenever the opportunity presents itself. She usually keeps her desires to spend time with him to herself, as she does not want to impede with his line of work.

Has the most acute sense of taste. Her birthday is May 17.

Midori's two promotion options are the Merchant and Mechanist classes. Merchant provides more supportive skills and introduces the ability to use Lances and Naginatas. to give Midori a close-up method of attack. The Merchant class does not particularly shine in any particular field, but with the solid defensive stats, Midori can perform as a decent wall with some interesting quirks from her class skills. She first learns Profiteer, allowing Midori a chance to generate Gold Bars. The activation rate is based on her Luck stat, so it receives the bonus from Lucky Charm, making Midori a great user for this skill if needing to generate Gold Bars for money. On Conquest, this makes Midori a solid, reliable way to get that much needed funds without the assistance of DLC. However, these gold bars also fuel the second skill in her class set, Spendthrift which gives her all the benefits of the Life and Death skill, without giving her foes the same benefits, all at the expense of one Gold Bar. If wiling to stockpile gold for this skill, Midori can perform as a solid front line wall so long as she has a healthy supply of them. Mechanist introduces Shuriken to her weapon repertoire, allowing her to apply stat debuffs to her enemies while giving her a 1-2 range weapon to prevent close quarter combat situations. Mechanist provides Golembane mainly for My Castle battles with Puppet, Golem, and other Mechanists as well as a few select chapters and PvP against units with Replicate, which Midori can also learn from this class. Replicate allows Midori to be in two areas at once, allowing her to spread her supportive skills across the map and activate Profiteer more often if needed. Because Midori has Ninja as her secondary class, promoting her to Mechanist will let her learn Locktouch and Poison Strike as you level, or immediately upon using her Offspring seal.

Midori can achieve an A+ Support with Selkie, Ophelia and female Kana. All three are available in Revelations.

Artwork of Midori for Fire Emblem 0 (Cipher) by HMK84.

Midori as a Merchant in Fire Emblem 0 (Cipher). 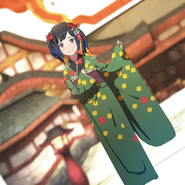 CG artwork of Midori in the Hoshidan Festival of Bonds DLC episode donning a Japanese yukata. 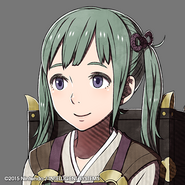 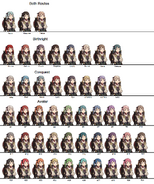