Cantor
[view]
“I am Mikhail, cantor of the Duma Faithful. I have come to teach Duma's Greatness to the fools who cling to Mila's lies. Now, rue your ignorance from inside the bellies of my gargoyles!”
—Mikhail

Mikhail in the Japanese version) is an enemy boss character in Fire Emblem Gaiden. He is a priest of the Duma Faithful who guards the Temple of Mila. He uses Conjure to summon powerful gargoyles.

Mikhail makes his sole appearance as Celica's final boss encounter during Chapter 3: War of Deliverance. He threatens Celica's party with his force of arcanists, snipers, and his horde of gargoyle terrors, but in spite of his power he is ultimately defeated by the priestess's group. His defeat enables Celica as the renewed Princess Anthiese to have the sluice gate near Mila's Temple lowered, which in turn allows Alm's group to be able to lower their own sluice gate following Tatarrah's demise.

As expected of a minor boss, Mikhail's personality is elaborated upon none whatsoever, but he is not without the typical haughtiness and cruelty that many others of his kind possess in Gaiden/Echoes. A devout follower of the Duma Faithful, his death does nothing to sour his nature, claiming that his death will do Celica's party no good to change their fate.

“Hmph... Ignorant, slothful heathens. Serving as food for my beasts is an honor greater than you deserve!”
—Mikhail's pre-battle quote.
“Heh... Killing me changes not your fate... It changes...nothing... Heh heh heeeeeh...”
—Mikhail's defeat quote.

Mikhail (Михаил) is the Russian and Bulgarian equivalent of Michael, which means "who is like God?". 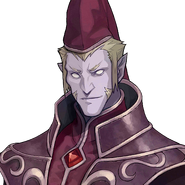 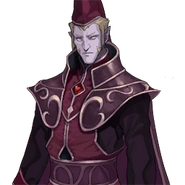