Heir of House Gautier (Formerly)
Leader of a band of thieves

Armen Taylor
[view]
“So, you think you can take the lance from me, huh? I'll kill you... I'll kill every last one of you!”
—Miklan's Boss Quote

Miklan is a character from Fire Emblem: Three Houses. He is the eldest son of the Margraviate of Gautier, and Sylvain's older brother. However, since he lacked a Crest and badly abused Sylvain due to resentment, he was disinherited as heir in favor of Sylvain in Imperial Year 1177.

Born to House Gautier, Miklan was its eldest child and older brother to Sylvain. While he was destined to become head of the house, his dreams were dashed when it turned out that he was born without a Crest while Sylvain was the one to inherit it, becoming its eventual heir. Losing his birthright to the whims of fate that denied him a Crest, Miklan was resentful toward Sylvain, and attempted to kill him a variety of times while the latter was young, with one of those instances involved pushing Sylvain down a well and leaving him there.

Spiteful to his former family, he soon became a leader of a bandit gang, pillaging villages and destroying them with sadistic glee while trying to claim power no matter the method.

Still vengeful against his family, in the Imperial Year 1180, Miklan led his bandit gang to the House mansion where he stole the family heirloom, the Lance of Ruin. As fate would have it, the Officers Academy dispatched the students of Garreg Mach Monastery to reclaim the lance. His bandit force attempted to stop them from reclaiming the lance, but ultimately they push through and initially defeat him. Determined to keep the lance, he attempts to draw out the lance’s full power, but lacking a Crest, the lance goes haywire and malevolent energy surrounds Miklan, transforming him into a hideous monster which promptly attacks the students. After an arduous battle the beast is slain and dispelled, leaving behind only the body of Miklan and the Lance of Ruin. The students later reclaim the lance and returns it home, leaving the former noble’s body behind.

Sylvain's Paralogue deals with the remaining gang, who stay united as they plunder villages because of their desperation. One Bandit still refers to Miklan as boss in a conversation with Sylvain, showing some still respected him.

Miklan is a vengeful and petty man, fueled by his disdain for his family who denied him at birthright when he lacked a crest while his younger brother did. He primarily blames Sylvain for the disinheritance, believing that he stole his birthright, and tried to kill him several times when they were young. He refuses to show any remorse towards abusing Sylvain to the point of nearly killing him at times, and was a sadist who destroyed and pillaged for pleasure as Dimitri will attest.

Despite this, Miklan has shown himself to be capable of leading his men, as Edelgard states that she was impressed by his capability to lead, and showed pity after his death.

Enemy Deals 1 to No Damage or Misses 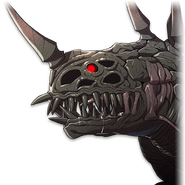 Portrait of Miklan transformed into the Black Beast