Princess of Valla
General of Valla (under Anankos)

Marisha Ray
[view]
“I am your mother, Mikoto. All this time I didn't know if I'd ever see you again!”
—Mikoto reuniting with her child in Chapter 4.

Mikoto is a character in Fire Emblem Fates. She is the queen and ruler of Hoshido.

At some time in the past, Mikoto became Sumeragi's second wife after his first wife's passing and became his second queen consort. She ruled alongside her new husband for some time, but her marriage was sadly short-lived, and she became the new Queen of Hoshido after Sumeragi's tragic death at the hands of the King Garon of Nohr after protecting Corrin from arrows from Garon's soldiers. She is a kind and polite woman who cares deeply for her new people and is loved by the citizens in turn despite her unknown origins, and rules with the help of the first prince Ryoma. She has the services of Orochi, and Reina as her direct retainers, and Yukimura as her tactician. Previously, Kagero was one of her retainers, but she requested that Kagero pledge her services to Ryoma when he needed to find retainers.

Should Corrin obtain an S-Support with Hinoka, Takumi or Sakura, they will mention that after Corrin returned to Hoshido, she had a premonition of their romance and sent them a letter explaining their true family relationship. Ryoma is the only one exempt from this, as he was the only one who knew of their true relationship, that Corrin's father was not Sumeragi, but was sworn to secrecy of this fact. However, the identity of the Corrin's true father is never revealed through their S-Support.

Mikoto herself does not directly appear in the Xenologues, but her backstory is revealed. Mikoto was born in Valla and is the sister of Arete. One day, she found an amnesiac hooded man and nursed him back to health. The two fell in love and eventually bore a child, Corrin. However, with the threat of the great dragon Anankos and his hostile takeover of Valla, the hooded man revealed to Mikoto that he is the disembodied soul of Anankos and regretfully decides to send her and Corrin away from Valla in order to protect her from his dragon half's wrath, along with Arete and her daughter, Azura. Mikoto was successful and managed to eventually make her way to Hoshido where she met King Sumeragi and Queen Ikona. Seeing her plight, Sumeragi and Ikona welcomed her and because of Ikona's sympathy for Mikoto she allowed Sumeragi to marry Mikoto. She became the step-mother of the Hoshido royal siblings, however, aside from Ryoma, she made them believe that Corrin is the child of Sumeragi.

After the death of her husband and the kidnapping of her child, tensions between Hoshido and Nohr increased. Nohr attempted to instigate a war for many years, however, Mikoto created a magical barrier that caused any Nohrians that entered Hoshido to immediately lose the will to fight, making a invasion into Hoshido impossible. To counter this, Nohr began assaulting Hoshido with Faceless, dark creatures lacking sentience, thus free to attack Hoshido.

After many long years, as fate would have it, during a mission to scope out a base on the border of Hoshido and Nohr, Corrin is knocked out by Rinkah and brought back to Hoshido. Kaze delivers Corrin to Castle Shirasagi and Mikoto was finally reunited with her child. After spending a day in Hoshido, they accept Mikoto as their mother, however their reunion is cut short. After gathering much of the Hoshido populace in Shirasagi Castle Town, a hooded man appears, taking the Ganglari from Corrin and uses it to attack them. However, Mikoto steps in the way of the attack to protect Corrin, killing her in the process. Overcome with grief from the death of their mother, Corrin degenerates into their dragon form and retaliates against the assailant. Even though Corrin's rage is eventually quelled, Mikoto's death causes the barrier she constructed to dissipate, allowing Nohr to finally begin its assault on Hoshido.

A statue of Mikoto is built in the center of Shirasagi Castle Town in the epilogue of Birthright. The Hoshido siblings vow to their mother that they will continue to protect the peace that she sought. Mikoto's visage appears over the statue and smiles at her children.

The possessed Takumi shatters the Yato and wounds Corrin, leaving them on the brink of death. On their death throes, Corrin finds themself in their old bedroom in Hoshido Castle. They are greeted by Mikoto, who urges them to wake up and finish the fight. After talking with the spirits of Mikoto and Ryoma, Corrin resolves to return and defeat Takumi.

After defeating Arete in Valla, Corrin and their army infiltrate the Vallite Castle. Corrin is teleported to a dark room where Mikoto materializes out of a pool of water, much to Corrin's shock. They refuses to be fooled by the visage of their mother made form by Anankos. However, when they prepare to strike her down, they stop their blade short of her, confused why she did not dodge or block. Mikoto affirms that she believes in her child and only wishes what is best for them, convincing Corrin to put faith in her words. She advises them to only open the blue doors, but during the third set of doors, she attempts to trick them into setting off a trap. She reveals that she wishes to kill Corrin and her Hoshidan children so that they can all be together as servants of Anankos.

After the battle, she apologizes for tricking Corrin, who reconciles because they knew she was being controlled by Anankos. Sakura breaks down, wishing to see her mother once more, but Mikoto smiles, saying that she was happy to see all of her children once more, which is reciprocated by the Hoshido siblings. She notices that the Yato chose Corrin to wield it and is happy to know that she was right to believe that Corrin would defeat her. As Corrin begins to well up, she tells them not to cry and reveals that she was born in Valla and was the sister of Arete. In turn, she reveals that Corrin is Vallite royalty. She warns them that they will face the biggest dangers up ahead, but knows that they can handle it before she fades away. As the Hoshido siblings mourn their mother's passing, Corrin is left to think over their identity as a Vallite royalty. However, they realize that their top priority is to take down Anankos. Corrin looks to the sky and vows to their mother that they will bring peace back to the world for her sake.

Despite her serene demeanor, she had her fair share of silly moments. Orochi mentions some of her odder moments in her supports with Ryoma and Corrin, like dressing too lightly when it snowed, forgetting she had two chopsticks in hand and ended up eating with four, or swimming with her slippers on. While she did keep herself as composed as she could in court, Orochi described her as 'like a wise sage and an accidental jester.'

Behind closed doors however, Mikoto agonized over her lost child, keeping herself alone in the shadows. That said, she was not afraid for Orochi and Kagero to see this side of her. After being reunited with them after many years, Mikoto was overcome with joy. However, despite Corrin's doubts from the revelation, she was patient enough to allow Corrin to come to their own conclusions, even if it would take much time. Holding her child's life above her own, she is willing to sacrifice herself to protect her child from harm.

Help Description: The late queen of Hoshido. Died in a surprise attack by Nohr.

Caring Mother
The extremely affectionate queen of another Hoshido. She is a nurturing adoptive mother to Azura. Appears in Fire Emblem Fates.

Mikoto is illustrated in the trading card game Fire Emblem Cipher with the following cards: 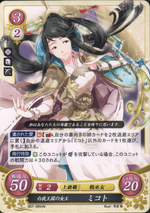 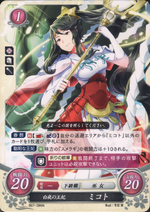