Mikoto (ミコト) is a character in Fire Emblem: Fates. She is the Queen and ruler of Hoshido. She is voiced by Sayaka Ohara in the Japanese version.

Mikoto became the Queen of Hoshido after the death of her husband Sumeragi at the hands of Nohr. She is a kind and polite woman who cares deeply for her people. She has the services of Orochi, Yukimura, and Yuugiri.

Should the Avatar obtain an S-Support with Hinoka, Takumi, or Sakura, they will mention that after the Avatar returned to Hoshido, she had a premonition of their romance and sent them a letter explaining their true family relationship.

Mikoto dies protecting the Avatar from the hooded man, sparking the conflict that forces the Avatar to decide between Hoshido and Nohr.

Mikoto dies protecting the Avatar from the hooded man, sparking the conflict that forces the Avatar to decide between Hoshido and Nohr.

In Chapter 24, the Avatar is suddenly separated from their party. Mikoto materializes from a pool of water, claiming that she is happy to see the Avatar again. The Avatar refuses to be fooled by a puppet created by Anankos, despite Mikoto's insistence that she is real. They attempt to attack her, but is stopped. Mikoto assures the Avatar that even if they will not believe her, she will always believe in them as their mother, even if she is a Puppet of the Touma king, before disappearing. After the battle, she apologizes for tricking them, but the Avatar reconciles because they knew she was being controlled by Anankos. Sakura breaks down, wishing to see her mother once more, but Mikoto smiles, saying that she was happy to see all of her children once more, which is reciprocated by the Hoshido siblings. As the Avatar begins to well up, she tells them not to cry and reveals that she was born in Touma. She also reveals that none of the Hoshido children were her children with the Avatar as her one and only child. Additionally, she reveals that Azura is the Avatar's cousin because Shenmei is her sister. She warns them that they will face the biggest dangers up ahead, but knows that they can handle it before she fades away. The Hoshido siblings mourn their mother's passing and the Avatar tells their mother to rest in peace as they promise to bring peace to the kingdoms.

While Mikoto doesn't appear in person, the Invisible History DLC set expands on her past and the Avatar's origins. During Anankos' fall into madness, Mikoto discovered an amnesiac man and nursed him back to health. The two fell in love and eventually had a child together, the Avatar. However during the destruction of Touma, the man realized his true nature as the discarded "heart" of Anankos and told the truth to Mikoto. He was ultimately forced to send Mikoto, their newborn child, and Shenmei's family away from Touma in order to save them from the wrath of his dragon counterpart.

Revelation Chapter 24 - A Face From Days Gone By

FEF Mikoto.gif
Mikoto interacts with her child, the Avatar. 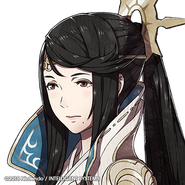