大地母神, Mother Goddess of the Land

Monica Rial
[view]
“Mankind faces trials enough without us burdening them yet more. I wish to be their salvation—the hands that dispel their grief and pain. It is our duty as gods to save them.”
—Mila to Duma in their Memory Prism in Echoes: Shadows of Valentia

Mila is a non-playable character from Fire Emblem Gaiden and its remake, Fire Emblem Echoes: Shadows of Valentia. Along with her elder brother Duma, she is one of two sibling gods who resides at the continent of Valentia. Mila is the patron deity of Zofia known as the Earth Mother, and her blessing helps crops grow on the earth.

Thousands of years ago, Mila was from the Divine Dragon tribe in Archanea. She served Naga, the ruler of the Dragon tribes and strongest of the Divine Dragons, blessing the lands to allow prosperity for the dragons, earning the title of Kingsgrail. Her brother would meanwhile protect her with his military might, earning the title of Kingshield along with Naga's favor.

When Duma clashed against Naga in a ferocious battle for Naga's harsh judgment on him for the destruction of Thabes, Mila sided with him. Though the two fought valiantly, even injuring Naga and causing some of her fangs to splinter and scatter across the realm, Duma and Mila were no match for Naga and her forces and surrendered after nine days of battle that caused extensive damage across the land.

For their transgressions, Duma and Mila were exiled from the land. Afterward, Duma and Mila traversed the ocean for seven days before they finally reached the continent of Valentia, which they would claim as their new home. There, they would become patron deities in the land.

Despite settling in Valentia, Duma's lust for battle, along with his beliefs over humanity led him to clash with Mila. While Duma believed that hardship creates hardy, strong humans, Mila believed that humans should live without strife, creating peaceful people.

Mila clashed with her brother for many seasons until they were both exhausted their power. This eventually caused the siblings to reach an accord: they would divide the land of Valentia into two, where Duma would rule the north and Mila the south, and the two would never intervene in the other's territory.

Founding of Zofia and Degeneration[2]

After the establishment of the Divine Accord, Mila would have a religion surrounding her, known as the Mila Faithful, with temples constructed as central places of worship, spreading the religion. Later on, Sage Matthaus, an astronomer, proposed a calendar to Mila, which she accepted, which would then be known throughout the continent as the first year on the Valentia Calendar. Mila's Turnwheel would be created around this time.

As time passed on, both Mila and Duma's strength waned, right as a pirate nation was formed and grew in power, threatening the Valentian mainland, as well as Archanea’s western coast. To combat these pirates in their weakened state, Duma and Mila selected two individuals for their brilliant exploits: Rigel and Zofia respectively. The Divine Dragons performed a blood pact with them, with Mila granting Zofia the spell, Ragnarok.

Once Rigel and Zofia defeated the pirate nation, Zofia would establish the Kingdom of Zofia. Mila would provide blessings of a good harvest for the people to spare them from suffering. However, eventually, Mila began to lose her reasoning from the madness due to the degeneration. Though Mila was younger than Duma, and thus did not degenerate as fast, her loss of reason prevented her from seeing the corruption of her own people.

Due to her ideals being taken to the extreme, the Zofians became lazy and hedonistic, who began to view Mila less as a goddess, and more of a means to provide resources.[3]

At the beginning of the game, Mila has mysteriously vanished, which prompts Celica to leave in search of her. It is later discovered that Mila was sealed within the Falchion by Rudolf, who she had fought when he and his forces invaded her temple, as part of a ploy to release humanity from the corrupting influence of their gods. It is later revealed by Halcyon, the former high priest of the Duma Faithful, that both Mila's body and the Falchion, which contains her soul, are sealed beneath Duma Tower.

Before Jedah, the new high priest of the Duma Faithful, sacrifices Celica's soul to Duma, he reveals to Celica that Mila sealed the Falchion, which had been impaled into her head, preventing anyone from using it. He then destroys Mila's body, with only her head remaining, then teleports both Mila's head and the brainwashed Celica to the treasure vault. Later on, when Celica is forced by Jedah to fight Alm, Mila calls out to Alm, telling him to grasp the Falchion in his hand and to trust in the sword. After Alm impales and kills Celica with the Falchion, Mila uses the last of her powers to revive Celica. Afterwards, when Alm asks Celica how she is alive, she says that she heard Mila's voice, telling her to have faith in the Falchion. Mila's soul then proceeds to speak with Alm and Celica, telling them the Falchion had taken away her powers. She reveals that the Falchion was created from one of Naga's fangs and bestowed upon Duma for the sole purpose of allowing mankind to kill her and Duma should either of them succumb to madness and that she had foolishly sealed the Falchion away in order to protect Duma. She then thanks Alm and Celica for showing her the strength that mankind possesses. Before fading away, she asks them to use the Falchion to stop Duma and free him from the depths of his pain.

After Duma is defeated, the religions of Duma and Mila are merged, led by Mila's priest Nomah.

Thousands of years later in Fire Emblem Awakening, the Valm citizen, Pheros, makes reference to worshiping Mila and Naga. Despite their religions being merged, Duma is not mentioned by Pheros. Another place, called the Mila Tree, is named after her, due to containing her remains.

Like her brother, Duma, Mila has benevolent intentions but the extremes to which she took them led to suffering. She intended to make Zofia a utopia without conflicts or wars, but her influence allowed the Zofians to become corrupt and she did nothing to stop Lima IV's massive abuses of power, even allowing Lima to take away her priestess Liprica for use as a concubine. Despite all her flaws, Mila seems to care about her brother, as after her sealing by Rudolf, she begged Alm to free Duma from his corruption with the Falchion.

Despite being more benevolent than her older brother, Mila also had immoral tendencies, clear enough for Liprica to be aware of as she was fearful to present Anthiese to her as she was aware that had Mila seen the brand on the child's hand, she would've murdered her.

Goddess of Love
Goddess of Love and sister of the god Duma. She and Duma fought over the continent of Valentia and split it in twain. Zofia, the south of Valentia, is her domain. Appears in Fire Emblem Echoes: Shadows of Valentia.

Mila is a colorless dragon infantry unit with a statline comparable to most armor units, having high bulk in both categories and a strong Atk at 53 neutral. In exchange, she is incredibly slow sitting at neutral 17 meaning that she is doubled by a vast majority of the cast, though thankfully her bulk can help her survive a few hits as she does not need to worry about color disadvantage except to Raventome users. While she is a formidable tank unit, she also carries skills that gives her excellent supportive abilities as well, especially for Aether Raids where not only does she use her Light Defense blessing to assist allies, but her unique passive has a few beneficial effects for anyone looking to succeed in Light seasons.
Mila's Nurturing Breath grants an additional 3 Def, bringing her neutral Def to 43 and has the standard adaptive damage when facing off against ranged units. Its unique effect grants a +2 boost to all of her allies within seven rows and seven columns centered around her when they are in combat. For most standard maps, Mila can effectively universally boost her allies no matter where they are, especially once she can place herself in the dead center of a map. This of course will stack on other skills and visible buffs, helping to bring her allies' stat totals into incredible ranges.
Her unique Skill C passive is Mila's Turnwheel which has two separate effects. If an enemy within the four cardinal directions of herself has less Def than she does, she inflicts the【Isolation】status, disabling assist skills like Rally and Harsh Command. In particular, this is extremely crippling for Dancers as, as of her release in May 2020, there is no unmerged dancer, without factoring skills, that can avoid this effect except for a Def Asset Summer Xander and only if Mila is also unmerged with a Defense Flaw. This effect makes her powerful against many Aether Raids teams, however the skill also grants the player an additional turn to clear an Aether Raids battle, bringing to Turn Limit to 8 rather than 7. Unfortunately the skill only works during Light Seasons, but the effect can be a godsend and provide the player just one more turn to properly dispatch an enemy, even if she is dispatched before the map ends.
Mila has Rally Def/Res+, giving her adjacent ally +6 Def/Res when she uses it on them. Bracing Stance 3 Grants her +6 Def/Res when her foe initiates combat on her, bringing her neutral Def/Res to 49/43 which few units can leave so much as a small scratch on her as a result. It also slows their special cooldown charge, making her much more difficult to counter. Sabotage Attack inflicts -7 Atk on any enemy who has at least 3 less Res as her and is adjacent to another foe. While the set up can be cumbersome to activate, some enemy team formation can inadvertently activate the effect.

Mila's Res is just slightly lower than her Def, thus it is a bit more optimal to target her with Tome users than it is to try most physical units. Raventome effect users like both Robins or Sophia can inflict a color disadvantage over her while exploiting her lower Res. Her possibly strongest counters are units with dragon slaying effects, in particular Legendary Marth can not only double her, but also completely prevent her from counterattacking. Other worthy candidates include regular Julia and her Legendary form, Legendary Tiki, and Nagi. Naga can also effectively turn her allies into dragon slayers and can make some very powerful units to counter her, especially those who have Brave or Firesweep weapon effects.

Her sole skill needed is a special, which Bonfire easily fulfills the role with the monstrous 24 additional true damage it adds to her attacks when it activates. Her remaining kit is nearly flawless, though mainly her Skill A is easily negotiable. Giving Mila as much Def through the easily acquired Fortress Defense for both her Skill A and Passive gives her a 10 Def boost bringing her neutral Def to 50, which essentially inflicts the【Isolation】status on nearly the entire cast ignoring any buffs, merges, and skills on certain units. While she does receive an Atk drop, the pros of turning her into a nearly impenetrable wall is worth the lost damage. For those who can acquire Fortress Defense Resistance will give her Res a decent boost as well and suffers a smaller Atk drop.

Mila is illustrated in the trading card game Fire Emblem Cipher with the following cards: 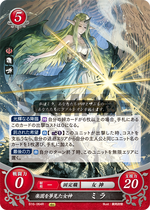 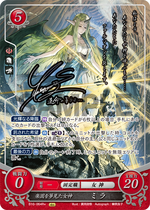 Mila is a female given name that originated as a diminutive of Slavic names containing the element mil, meaning "gracious" or "dear".