The Miniature lance is analogous to the Imposing Axe, with the former being the smallest lance and the latter the largest axe. 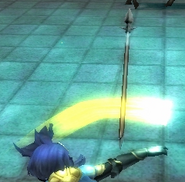