Map 10: Freedom and Justice (can join in Map 17: Warriors of the Plains)

“For years, I have placed my honor as a knight of Canaan above all else. But that's simply not possible anymore... So, Runan, will you hire me as one of your mercenaries?”
—Mintz, in a conversation with Runan

Mintz (ミンツ Mintsu) is a playable character from TearRing Saga: Utna Heroes Saga. He is a member of the Arless Black Knights led by Silva. He is also implied to be a friend of Ernst, who provides an opportunity for him to leave the army.

Mintz is introduced when he enters Pavlov's private quarters and witnesses him torturing Rennie for information. Around this time, he is ordered to throw Rennie into the dungeon due to her refusal to reveal the location of Lionheart's secret base. He decides to stay in the dungeon with Rennie in order to look after her. Once she wakes up and reacts with shock upon noticing him, he clarifies that he does not intend to hurt her.

During Map 10, Mintz becomes concerned about Rennie and travels around the battlefield until he arrives at the castle where she is prepared to be publicly executed. There, he challenges Pavlov and provides an opportunity for Rennie to escape. If he joins Runan's army at the end of the chapter and Rennie does not, he can reunite with her in Map 17.

In Map 18, Mintz can visit one of his acquaintances, Martha, in order to take back a Re-Move Manual that he once gave to her. Later in the game, he can recruit his accomplice, Hagaru, by informing him about the many beautiful women in Runan's army.

In the ending, Mintz becomes the second-in-command to the Arless Black Knights. He is accompanied by Rennie if she does not fall in love with Barts. In this scenario, he rejects her when she confesses her love for him because of their age difference.

Mintz is an example of a promoted unit who is good when he joins and stays good for the majority of the game. His combination of high movement, decent bases, powerful skills, and average growths makes Mintz a good filler unit for the player's army. He will never be the best unit on the team, but he will not lag behind much until the endgame.

“I don't have anything against you... This is just my job.”
—Mintz's battle quote as an enemy 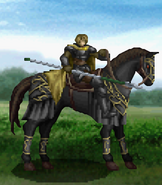