Heather Halley
[view]
Mirabilis is a character in Fire Emblem Heroes. She is a Ljósálfar, a resident of Ljósálfheimr, the realm of dreams.

Mirabilis is a fellow Ljósálfar and a friend of Peony's. Peony seeks her out as she is the only one who knows how to get to Dökkálfheimr. She has power over daydreams. As her power allows people to dream without falling asleep, she is able to use this ability to enter Dökkálfheimr. From that point onward, she aids the Order of Heroes in their fight against Freyja, though not without falling asleep constantly.

Like other alfr, Mirabillis was once an ordinary human girl. However, her mother never wished for a child and mostly neglected Mirabilis after her birth, leaving her to daydream all the time. Eventually, she would met Freyr and Freyja in the dream world and became an alfr.

Mirabilis has a lethargic personality and often falls asleep, even in tense situations.

Daydream
A ljósálfar from Ljósálfheimr, the realm of dreams. She brings daydreams to mortals and sleeps during day and night. Always seems to have just woken up.

Mirabilis is a Sword Flier Mythic Hero designed to work on defensive Aether Raids maps as an Anima Mythic. Like her fellow Ljósálfar Peony, Mirabilis is ultimately a supportive dancer unit with a unique Dance skill. Statwise, she is extremely unique as she has high bulk in both categories sitting on a neutral 32 Def and 35 Res and a solid 38 HP. Her Atk is also quite formidable at 34 Atk without her weapon, meaning that she can also deliver solid offense when needed. However, all of these traits are traded for incredibly low Spd at neutral 18, meaning that most units can double attack her. Nonetheless, she shares many traits with Peony and has incredible applications on any team.

Mirabilis's weapon, Flower of Ease, grants her an additional +3 Res, bringing her neutral Res to 38. All enemies within three columns centered around her that have any sort of stat penalty or a status like【Isolation】are further inflicted with a -3 debuff to their core stats during combat. Depending on her own equipped skills or the skills of her allies, she is a dangerous debuffer and can make her allies deceptively bulkier and stronger as a result.

Her unique dance is Whimsical Dream which grants a +5 Atk buff to an ally she dances to. If there are any allies within two spaces of her dance target, they receive the same Atk buff. If there are enemies within 4 spaces of the dance target, she will also inflict an Atk -5 Debuff on the closest enemy or enemies if there are multiple enemies within the same distance. With her unique weapon and assist command in mind, Mirabilis' gameplan is to debuff her enemeis as much as possible.

She has Fortress Def/Res 3 which slightly lowers her Atk to neutral 48, but her two defensive stats go up by 6 instead, bringing both her overall neutral defensive bulks to 76 and 82 respectively. Sabotage Defense inflicts a Def -7 debuff on enemies who have three less Res than Mirabilis and is adjacent to a teammate. At 44 Res neutral, unmerged, she is able to force this debuff on a large portion of the cast as enemies. Finally Defense Resistance Gap gives a Def/Res +5 buff to the ally with highest combination of Def/Res for one turn. While this cannot affect herself, the improved bulk may prove beneficial for dueling units or fellow high bulk units.

Blue units are the best options to take care of Mirabilis, especially physical ones who can exploit her slightly lower Def and nearly all Blue units should be able to double attack her easily. As a flier unit, this also leaves her vulnerable to bow units like Kinshi Hinoka, Legendary Alm, and Legendary Leif. Blue Bow units are especially strong counters having the color advantage added on, thus units Legendary Chrom and Legendary Lucina are her strongest counters. Mirabilis is luckily extremely resistant to ploys given her solid 44 Res. However it should be noted that both Bridal Fjorm and Mila can inflict【Isolation】on her as she lacks the HP or Def to overcome either of them, even when they are unmmerged.

Mirabilis needs a Special skill and Iceberg provides the most consistent damage out of her given that her Res is higher than her Def. Attack Ploy may prove better as a Skill C as it depowers their Atk, thus making it harder for most foes to even scratch her while Defense Ploy increases her one hit damage.

Sugarplum Vision
A ljósálfr who can be found sleeping at all times and places. Struggling to stay awake for the winter festival, she is doing her best to participate.

Mirabilis is illustrated in the trading card game Fire Emblem Cipher with the following cards: 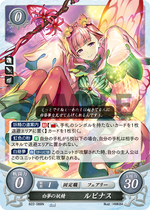 Mirabilis is a type of flower that is also known as the four-o'clocks as they usually bloom in the late afternoon or dusk. The most common type is Mirabilis Jalapa which were cultivated by the Aztecs for medicinal and ornamental purposes.

Lupinus, commonly known as lupin or lupine, is a genus of flowering plants in the legume family Fabaceae.