Chapter 16B: The Dark Forest

Paula Rhodes
[view]
“All of this began when Leonster fell. My lord father was a gentle man, who hadn't the heart for battle—and he knew there was little sense in fighting the Empire. But nevertheless, he took you in, sheltered you from the Empire—and in so doing, invited their wrath! He had to turn me over to them as a hostage and forfeit his own right to the throne! And in the end, he departed this world in a state of utter misery... I cannot forgive you, Prince! If you'd never come to Ulster, things wouldn't be like this...”
—Miranda, in a conversation with Leif

Miranda is a playable character from Fire Emblem: Thracia 776. She is the princess of Ulster.

Miranda and Leif were first acquainted when the prince was taken under her father's wing for a period of time in Ulster, hiding him from the clutches of the Grannvale Empire. Leif was, however, forced to take flight when the Empire went to Ulster in search for him, leaving the country to be ravaged, resulting in the death of Miranda's father and her imprisonment in her own country.

When Leonster and Tahra later began staging rebellions, Miranda was relocated to a remote Loptr Church in Melfiye Forest. Throughout the duration of her trying imprisonment, Miranda was used as a hostage to force the Ulster general Count Conomor and his powerful troops to fight for the Empire. All of this has a heavy impact in Miranda's psyche and heart, making her extremely bitter and conflicted regarding Leif's existence.

Miranda first appears in Chapter 16B when Leif's army seizes the church she is held captive in while passing through Melfiye Forest. Her reunion with Leif is an unpleasant one, as she immediately expresses hatred towards him, blaming her country's fall on him. However, Dryas interjects by stating that the Empire would still have invaded Ulster even if Leif had never been there. He shifts the blame of Ulster's fall on Miranda's father, for he had refused to aid Leonster when it was invaded by both Thracia and the Empire. Leif stands up for Miranda at this point, chastising Dryas for going overboard before apologizing to her for not knowing about her dire circumstances. This calms her down enough for her to decide to join Leif's army, vowing to liberate Ulster and avenge her father.

After Leif successfully liberates his home Leonster in Chapter 18, Miranda emerges to remind him of their promise to liberate Ulster together, before revealing that its civilians are staging a rebellion that will almost certainly result in their massacre. Even though Dryas and August are adamant that Leif not challenge the Empire head-on by helping Ulster, the prince defies them and they are forced to relent. Dryas then takes half of the troops and depart for Ulster first.

Leif leads the remainder of the troops and sets out for Ulster the next day in Chapter 19. While en-route to Ulster, he receives bad news: Dryas had been overwhelmed by the Empire's might, choosing to sacrifice himself to buy time for his troops to retreat. Leif is forced to retreat with his troops, and they are pursued by the Empire, with Conomor figuring in their ranks. Miranda can speak to Conomor while fleeing with Leif's army, where she convinces him to defect and fight for Leif.

Miranda then goes on to continue supporting Leif in his cause to liberate Northern Thracia from the Grannvale Empire. She approaches Leif in the Epilogue, where she asks him if he wishes to marry her, stating that she has come under pressure by the court nobles to do so to forge a unification between Ulster and Leonster. Leif claims he does not have time to attend to such matters at present, and Miranda thereafter returns to Ulster to wait for him to decide again after the war against the Grannvale Empire and the Loptr Church is over.

While waiting for Leif, Miranda falls in love with an unnamed knight and disappears. She is said to live happily as a wife and mother.

Miranda is a fiery and headstrong young woman, who, even in capitivity, never forgot her vow to liberate her kingdom. Embittered by the downfall of her country, Miranda was filled with hate and especially with sadness when she is first introduced in Chapter 16B. Here, she immediately lashes out at Leif upon seeing him, blaming him for bringing about Ulster's fall.

Despite her short temper, Miranda is not unreasonable. As she continues working closely with Leif beyond their unpleasant reunion, she comes to respect him for being a responsible leader. This can be seen in her conversation with Count Conomor in Chapter 19, where she acknowledges his effort in attempting to help her retake Ulster, losing many of his troops and a close adviser in the process.

Miranda is of the Est archetype, starting out weak but possessing the potential to become powerful due to her impressive growth rates, particularly in Speed and Magic. As a result of her late join time and her low base level, she should exploit Crusader Scrolls to ramp up her growth rates. The Dáinn Scroll is particularly useful, remedying her poor Defense and giving her the opportunity to gain extra Movement.

Miranda does suffer from problems that other characters belonging to the Est archetype does not. In a game where many characters have a FCM of 3, 4, or even 5, Miranda's FCM is permanently limited to 1. She also lacks access to Personal Weapons. To compensate for these flaws, Miranda has access to Wrath, but her weak defenses make Wrath risky to rely on.

Miranda is also somewhat let down by her promoted class, the Mage Knight. As a Mage Knight, Miranda's low Strength will hamper her usefulness with Sword-based attacks, and she is confined to wielding magic instead. She also lacks the Build to wield all but the lightest of Swords, although the Flame Sword and other magic weapons might be viable choices. You can attempt to fix this with Crusader Scrolls, particularly the Njörun, Nál, and Dáinn scrolls, which will improve her Strength growth. Somewhat embarrassingly, Miranda's Movement will actually be reduced if she promotes indoors due to being forced to dismount, which impacts her badly, as these make up the majority of endgame maps.

Lastly, while Miranda has undeniably good growth rates, Thracia is likely the game where stat growths affect unit performance the least. Crusader Scrolls can provide almost any unit with growths similar to Miranda's, promotion bonuses are very high, enemies are generally subpar, and most pivotal of all, stats cap at 20 across the board. It can be difficult to justify expending the work to level Miranda when many offensive magic units can also boast 20 Speed, Skill, and/or Magic by her joining time.

Willful Princess
Princess of Ulster who was held hostage by Grannvale. Strong-willed but not without a gentle side. Appears in Fire Emblem: Thracia 776.

"While waiting in Ulster for Leif's answer, Miranda fell hopelessly in love with another knight. While still possessed of a short temper and prone to misunderstandings, she leads a happy life as a wife and mother"

Miranda is illustrated in the trading card game Fire Emblem Cipher with the following cards: 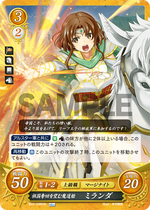 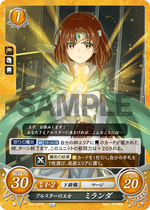 Miranda is a name of latin origin, meaning "worth of adimration".