When cast in Awakening, blobs of green slime will emerge around the selected enemy target's body before rupturing to inflict damage upon him/her.

In Awakening, Mire can be purchased very early on from Gharnef or Raydrik when their bonus team is summoned through SpotPass. This spell can be gamebreaking in some of the later missions as it allows the player to safely kill off enemy commanders from across the map while denying their ability to even defend themselves. This works even against another unit with the same tome or an Archer / Sniper with a Longbow, should the latter be in the minimal range of the Mire user. 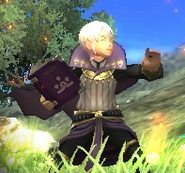 Henry wielding the tome of Mire in Awakening.