Tara Platt
[view]
“I wondered what manner of ignoramus would mislay their weapon. Now I know.”
—Miriel bringing Vaike's axe in Chapter 2

Miriel is a playable character from Fire Emblem Awakening.

Miriel is a member of Chrom's Shepherds. She is the mother of Laurent and a potential mother of Morgan.

In Chapter 2, Miriel arrives at the Northroad shortly after the Shepherds engage a group of Risen soldiers. Upon entering the fray, Miriel stumbles upon a lost axe on the ground and decides to hold onto it until she could find its owner. Upon learning that the owner is none other than Vaike, she proceeds to chastise him before returning him his axe, where she warns him to keep track of his belongings or risk having it forcefully attached to his hands by magic.

In Paralogue 14, Miriel and the Shepherds arrive at the Desert Oasis after hearing about the supposed "Mirage Villages." Piquing Miriel's interest, if she visits the southwestern mirage village, Miriel will encounter Laurent, who recognizes her even though she does not remember any sort of meeting between the two. Laurent offers to accompany her during her research of the villages, which she accepts. After the map is cleared, Miriel is approached by Laurent once more, who asks her about his performance in battle. Though she bluntly points out his flaws, he makes up for it from skill developed through hard work. Appreciative for her praise, Laurent calls her mother and shows her a carbon copy of her ring that he had received from her in the future. Though Miriel claims that the possibility lies that the ring is inconclusive proof as Laurent may be a thief who may have stolen it from from her said child, Miriel does not deny that Laurent is possibly her son. Miriel, for the time being, accepts that he is possibly her son and wishes to inquire whether or not he truly is her son, together.

After the war, Miriel will continue with her studies, often disappearing for days upon her latest discoveries. In her final years, her research cumulates with an invention of extreme importance, though the said invention is not made clear to the player.

Miriel is a perfectionist who cannot stand having even a single book out of place in the Shepherd's garrison. She is especially harsh when berating anyone who behaves thoughtlessly. An embodiment of efficiency, Miriel keeps track of everything in the army, making sure everything is up to code. In fact, she is efficient enough to keep her own possessions in order, even though she has the most possessions out of everyone in the army.

More so, Miriel is an intellectual individual with a vast array of eloquent vocabulary which leaves most of the Shepherds, more often than not, confused or sometimes even annoyed. Miriel tends to be interested only in the theoretical and discovery of the inner workings of the world. If something interests her, she will stop at nothing until she knows all of it.

For all her intellect, Miriel seems to be lacking when it comes to common sense or any social skills. In her supports with Robin, when she obtains an item pouch belonging to them, her interests lie in testing what gravity does to the pouch if dropped instead of giving it back to its owner. In her supports with Libra, she helps him preach to more people, but fails to understand why less people are coming to his sermons. Perhaps the most profound example lies in her supports with Lon'qu, where she puts herself in dangerous situations just to test whether or not he would come to her rescue.

Miriel's personality during her romantic S-Supports are starkly different from other character's S-Supports. While most openly will declare their love, Miriel admits her affections in a scientific and clinical manner, usually saying that she had "developed feelings" for them at best. Still Miriel becomes a loving wife and fully supports her husband throughout the war, but still retains her scientific way of stating her love for him in her romantic Event Tile quotes.

Miriel is a very capable Mage unit and the first magic user recruited in the game, save Robin. Her Magic, Speed, and Skill grow at very steady rates, making her able to inflict more damage, launch more attacks, and better perform critical attacks in battle. Such strengths are, however, offset by her low Defence growth, making it imperative for her to avoid as much strength-based damage as possible. Compared to the other playable Mage hailing from the parent generation, Ricken, Miriel is magically stronger and has better growth rates in Skill, Speed, and Resistance.

As a Sage, Miriel gains the ability to wield staves, and a rather potent one at that since her high Magic stat (second only to Emmeryn) in this class makes her a far more competent healer than both Lissa and Maribelle in any of their stave-wielding classes. Apart from this, Miriel's high Magic also makes her double as an incredible offensive magic unit, a fact that is bolstered by the Tomefaire skill, one that will further strengthen said stat when tomes are equipped. As a Dark Knight, however, Miriel's low Strength makes her the weakest Dark Knight when equipped with a sword. On the contrary, when her high Magic stat is exploited through the heavy usage of tomes, Miriel may thence be considered the most powerful Dark Knight, magic-wise. This, coupled with the tendency for enemies to possess low Resistance, renders the Lifetaker skill a splendid one for Miriel to learn, as she can readily recover copious amounts of HP with each kill that she chalks up.

Miriel's two reclassing options are the Troubadour and Dark Mage lines. Both function very well, as they harness Miriel's strengths in Magic, Speed and Skill.

As a Troubadour, Miriel's growths are slightly better than Maribelle's in nearly all stats, save for Luck and Resistance. She will also gain some weapon experience in staff mastery, which will be useful in 3 of her 5 promoted class options. In spite of this, she also suffers from the exact same low defense problems that Maribelle faces. As a Valkyrie, her defenses may still hinder her, but only slightly; As her high Skill and Speed, alongside her ability to wield tomes once again, will be more than sufficient to ward off any threats that are made against her life. Yet another benefit that the Valkyrie class provides is the Dual Support+ skill, which gives her or her partner a significant boost in Pair Up situations, especially so when she is paired up with her husband. As a War Cleric, Miriel's caps will be more balanced, although her Strength and Defence will still leave a lot to be desired. Miriel may encounter difficulties killing enemies because of this handicap, but with proper Axe training or at least two Arms Scrolls, Miriel can thence utilize Bolt Axes to rectify this problem. Renewal is a great skill for her to possess as well, especially after she has been subjected to a bad enemy turn. Stacked with the Lifetaker skill, Miriel can thus recover a massive 80% of her health in one turn.

As a Dark Mage, Miriel gains only one new promotion class: Sorcerer. In this class line, Miriel can keep pace with Henry and Tharja, the other two Dark Mages; Her Magic growth, for one, is exactly the same as Tharja's, while her Speed matches Henry's. Her Defence growth is, however, markedly lower than both of theirs. Most of her other stats will fall somewhere between the two, allowing her to assume the role of the median Dark Mage/Sorcerer unit. As a Sorcerer, Miriel can learn Vengeance, the only attack skill that she can possibly pick up. Given her high Skill, Miriel can activate this skill fairly frequently after sustaining a few well-placed physical hits, allowing her resultant damage output to reach dangerous levels. Also, the Tomebreaker skill can make her an anti-mage unit, allowing her to avoid Magic-based attacks while piling damage upon the perpetrators in question.

Rapier Intellect
A serious and methodical Shepherd. Loves to research and is knowledgeable on a wide range of subjects. Appears in Fire Emblem Awakening.

Miriel - Rapier Intellect
Miriel remained in Ylisse but would vanish for days at a time when her discoveries prompted further inquiry. In her final years, these excursions culminated in a historic invention of supreme import.

Miriel and Robin
Many wrote of Robin's legendary exploits, but accounts of his origins and character varied. Scholars, poets, and bards agreed on one thing alone—he loved his wife, Miriel, above all else.

Miriel and Frederick
As Ylisse's new knight captain, Frederick took charge of keeping the peace and training new recruits. Alas, his wife, Miriel, would often vanish for weeks at a time as she pursued her studies.

Miriel and Virion
Virion returned home to Rosanne, where he was labeled a traitor and a coward, or else ignored entirely. But Miriel's discoveries improved their quality of life, and they soon came to love him once more.

Miriel and Stahl
Stahl continued his service as an Ylissean knight and led crucial missions across the realm. His scatterbrained gaffes were met with criticism from Miriel, but the two still built a happy life together.

Miriel and Vaike
Vaike returned to the streets that raised him and was welcomed as a hero and brother to all. He lived out his days with Miriel, whose sharp mind and tongue refused to be dulled by any change of scenery.

Miriel and Kellam
Miriel remained in Ylisse but would vanish for days at a time to pursue her studies. In her final years, this research led to a historic invention. Her husband's name has been lost to history.

Miriel and Lon'qu
Lon'qu returned to Regna Ferox and served as Basilio's right-hand man. Miriel went with him and focused her studies on Ferox's unusual weather conditions.

Miriel and Ricken
While continuing to study magic, Ricken realized how childish some of his actions had been. Miriel's intellect inspired him greatly, and together they unlocked the secrets of the universe.

Miriel and Gaius
Gaius never lost his sweet tooth, though he ultimately returned to less savory enterprises. Miriel soon began researching new and more-powerful sweeteners for her husband to enjoy.

Miriel and Gregor
After the war, Gregor briefly sank into a life of excess, but when his wife began to treat him like part of the woodwork, he resumed work as a sellsword. Miriel helped out by researching Gregor's targets.

Miriel and Libra
Many an unfortunate child found joy in the small orphanage Libra and his wife built after the war. The children were said to love Libra like a mother but flee in terror at the sight of Miriel.

Miriel and Henry
Henry settled down with Miriel and turned out to be a surprisingly good father. Their newborn son grew up surrounded by his parents' vast library, dooming him to a future as a bookworm.

Miriel and Donnel
Donnel returned to his tiny village and built a happy life with his mother and his wife, Miriel. The latter directed her studies on the local flora; Donny was shocked that trees could have ten-syllable names.

Miriel is illustrated in the trading card game with the following cards: 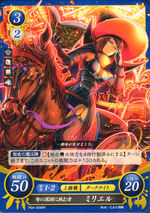 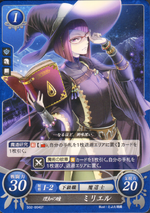 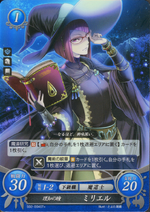 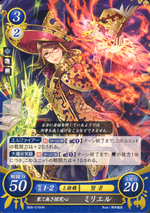 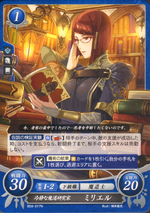