Pegasus Knight
[view]
“This isn't about my mother. Back home, we've got lots of starving children. We're doing this for them. All we want is enough coin to buy bread and milk...”
—Misha to Nicolov in Chapter 17A

Misha is a playable character from Fire Emblem: Thracia 776. 20 years of age, she is a Pegasus Knight and a general in Silesse's army. Misha is the daughter of Díthorba, a traitorous Silessian knight who had attempted to overthrow Queen Lahna and murder Prince Lewyn in Genealogy of the Holy War.

Misha first appears in Chapter 14x, where she is mobilized to pursue Leif's army as they flee from Tahra. When she arrives on the scene, Codha, a bishop from the Loptr Church, orders her to return to Leonster and leave behind the pegasus squad accompanying her.

Misha later reappears in Chapter 17A when Leif's army prepares to storm the eastern gate of Leonster. Before the battle begins, Nicolov questions Misha on her motive to fight, pointedly asking her if she is doing so to avenge her deceased mother. Though bothered by the question, she refuses to give him the answer he seeks, asserting that she is not fighting for revenge, and is instead motivated by the desire to provide food for the starving orphans in war-torn Silesse.

Karin can speak to Misha in this chapter, where states that she is fighting to protect something, although she cryptically refuses to reveal what it is. If she is later captured by Leif's army, Leif will attempt to speak to her, only for her to demand that she be killed. Karin will interject at this point, revealing that one of Misha's subordinates had informed her that the pegasus knights' reason for fighting is because of their desire to save Silesse's starving children. August then joins in the discussion, where he opens Misha's eyes to the Child Hunts. She then makes the decision to defect from the Empire to join Leif's army instead.

Misha then goes on to continue supporting Leif in his cause to liberate Northern Thracia from the Grannvale Empire. She returns to Silesse thereafter, where she joins its liberation war. Once the country is freed, Misha is appointed the position of first commander of the newly reformed Silessian Pegasus Knights.

Misha is at once a practical and sympathetic person, choosing to set aside her ideals and values in order for the sake of protecting her people. This is evident in her choice to ally herself with the Grannvale Empire despite it being regarded as her country's enemy, desiring to earn the gold she needs to end the suffering endured by the starving children back home.

Misha is also known to detest receiving sympathy from others, fiercely valuing her personal dignity. This can be seen when she is captured but not killed by Leif's army, where, unable to bear living in captivity, she demands to be killed instead of having to bear the humiliation of being spared.

*6 move while dismounted
**3 stars as an enemy unit

Misha begins with average stats, but this is countered by her excellent growths. This means that she can become very powerful if given proper investment. However, Misha's durability is very poor, and this becomes especially prominent in the subsequent outdoor chapters she is available in, where ballistae are common.

Misha also comes with an A rank in Swords and Lances, which grants her access to a wide range of weapons that she can use both indoors and outdoors.

To help fix Misha's low Luck, the Bragi Scroll is recommended. She will also benefit from defensive scrolls such as the Dáinn Scroll and Nál Scroll to help lessen her durability issues.

A large boon to Misha is that she possesses 1 more point of Movement than every other flier in the game at base, and when paired with her Movement Star, this allows her to be very mobile.

“Get out of my way!”
—Misha's battle quote as an enemy

“I thank you for your mercy, but I still have to fight.”
—Misha's quote if released after capture

Misha is illustrated in the trading card game with the following cards: 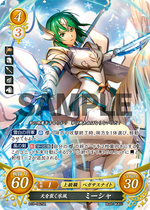 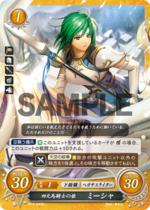 Misha (Миша) is a diminutive of the name Mikhail (Михаил), which is the Russian and Bulgarian equivalent of Michael.

Misha as a Level 10 Pegasus Knight in the Fire Emblem Trading Game.

Misha as a Level 15 Pegasus Knight in the Jugdral Anthology series of the TCG.

Misha as a Pegasus Knight in Fire Emblem 0 (Cipher).

Misha as a Pegasus Rider in Fire Emblem 0 (Cipher).

A portrait of Misha from the Thracia 776 Illustrated Works.