View source
watch 01:10
Who is Mist?
Do you like this video?
Play Sound

[view]
“...No...I will not be the only one who runs away!”
—Mist, fighting Muarim in The Feral Frontier in Path of Radiance

Mist (Alja in the German version) is a playable character from Fire Emblem: Path of Radiance and Fire Emblem: Radiant Dawn. She is Ike's younger sister, and the daughter of Greil and Elena. She fights with the Greil Mercenaries out of a fear of being separated from her brother, using healing magic taught to her by Rhys. When the Medallion reaches its critical state, Mist is the only beorc to be affected by its call, and collapses in a similar manner to the Herons.

Mist appears in Super Smash Bros. Brawl as a Sticker, and in Fire Emblem Awakening as a recruitable SpotPass character.

Mist was born in Gallia, and spent her early years in this country with her family. During this time, she is entrusted to be the keeper of a bronze medallion by her father. Unbeknownst to her, she is the only beorc who can hold the medallion without going berserk due to the forces of Order and Chaos being unusually balanced in her heart. She often sings a lullaby taught to her by her mother to the Medallion, which, in actuality, is the Galdr of Release. After the death of her mother, Mist moves to Crimea with her remaining family members, where her father starts the Greil Mercenaries.

As the Greil Mercenaries run errands for their employers, Mist assists them by ensuring that their home fort is kept in tip-top condition, doing a wide range of household chores, such as that of cooking and cleaning. Her culinary skills, however, leave a lot to be desired, as described by Ike in a support conversation he shares with Oscar.

Trouble begins to brew for the Mercenaries when news of an impending invasion by Daein reaches their ears. In order to avoid this conflict, they are forced to leave the fort and proceed to the safety of Gallia.

On the way to Gallia, Mist, alongside Rolf and Elincia, is instructed to take an alternate route from the Mercenaries to avoid the fighting. After joining up with Ike and the rest of the Mercenaries, she then accompanies them to take up temporary residence within an abandoned fortress.

Greil is later slain by the Black Knight that night, and dies away from the fort. This incident severely impacts Mist, who is unable to forgive herself for not being there by her father's side as he breathed his last.

Determined not to make the same mistake with Ike, Mist forces Rhys to teach her how to use Staves, and makes plans with Rolf to fight alongside their siblings. When the Greil Mercenaries move to enter battle again, she and Rolf force their way onto the battlefield, and succeed in convincing Ike and Boyd to allow them to fight alongside them. Mist later plays a major role in uncovering Duke Tanas' plot, and witnesses the rebirth of Serenes Forest by the Herons Reyson and Leanne.

When Ike later challenges the Black Knight in Nados Castle, Mist charges in and provides assistance to him as a healer. The pair will then flee the castle before it collapses.

Mist will then continue to stay with the army, assisting it in the defeat of Mad King Ashnard.

Mist returns in this game when Crimea is embroiled in a civil war, where the Mercenaries take on a job to quell the rebellion, alongside saving Lucia from being executed. As the Mercenaries later joins the ranks of the Laguz Alliance, Mist will then participate in the battles that follow.

As the war rages on, Mist becomes increasingly ill as the forces of chaos residing within Lehran's Medallion become uncontrollable. In the middle of a battle with Daein, she succumbs to the Medallion's influence, whereupon she is led off the battlefield. Mist will then reveal that she could hear a voice in her head urging her to awaken the dark god with the Galdr of Release.

Mist will then join Ike's progress to the Tower of Guidance. She also warns Ike to be careful when he faces off against Zelgius, the Black Knight for the final time. After Ashera is defeated, she will return to Crimea with the Mercenaries. Mist will marry Boyd if she shares an A rank Support with him.

Mist possesses a cheerful demeanor that speaks from the heart, and enjoys helping others as best she can. This has lead her to attempt to carry out certain tasks that she is not necessarily good at, with examples including cooking and sewing. Mist often makes valiant efforts to befriend others, as can be observed through her making meals for Jill and striking up conversations with Mordecai.

She harbors a deep love for her family, where she tears up whenever she discusses her deceased father, alongside striving to stay close to Ike in a bid to prevent him from leaving her. Despite the resolve that Mist has, however, she simply abhors fighting, but is able to understand that doing so is key in protecting her loved ones.

Though she has the gentle face and demeanor inherited from her mother, she has a fiery determination that burns once pressed to decide on something important, passed on by her father. This leads to her having the tendency to fly into tremendous outbursts of anger at times, specifically towards those who have harmed her family, such as the Black Knight.

Mist starts out as the only playable Cleric in this game. She is a staff-wielding unit who has low base stats, joins in Chapter 9 and can only heal small amounts of HP, but has the potential to grow into a usable healer if given proper training. Mist is able to promote into a Valkyrie, increasing her mobility and making her a mounted healer, and will gain the ability to wield Swords (strangely enough, she does not receive mounted unit bonus damage). Statistically, Mist is very physically fragile but has solid magic, luck, and resistance, though her strength is a bit shaky and her skill is very low, which can hamper her offense upon promotion. When compared to Rhys, the other available staff user early in the game, Mist has greater mobility upon promotion, which is important as many of the maps in Path of Radiance favor units with higher movement. Rhys, however, has the advantage of more availability and higher staff rank when Mist joins. He will also usually end up with higher magic, due to his superior base and growth. As such, continuing to use Rhys while waiting for Mist to catch up is a good idea.

If seeking to use Mist, it is recommended to train her to a B-rank in Swords after promotion so she can use the Sonic Sword. Mist gains D-rank Swords upon promotion, giving her less effort needed than other characters to train up to a B-rank in a weapon gained upon promotion. What's more, there is little competition for the Arms Scrolls, so those can be used to get her up to B-rank as well. If this is done, Mist can become a glass cannon of sorts.

Mist reappears in this game as a Cleric. She joins with a personal sword of her own, where she is able to inflict damage upon enemies at a distance. Her capped Luck is lower as a Valkyrie than it is as a Cleric, a trait that is most likely a result of the statistical balance that mounted units boast.

In this game, Mist will take mounted unit bonus damage as a Valkyrie, unlike her counterpart in the previous game. Once promoted, she will gain the Sol skill, and is a good candidate for bringing into the Tower of Guidance.

The Holy Crown item may only be used by Mist, and allows her to promote into a Valkyrie. However, as she is capable of promoting prior to receiving this item, it is thus considered to be redundant.

Purest Spirit
Ike's sister and a great help to the Greil Mercenaries. Looks forward to shopping at the Day of Devotion festival. Appears in Fire Emblem: Path of Radiance.

VS the Black Knight

Mist: ...Sniff...sniff...
Black Knight: Do you tremble in fear, little daughter of Gawain? How...entertaining. But if you value your life, you will leave this place at once.
Mist: You...you took my brother and my father! My sword may not even scratch you, but I don't care. This one blow... will contain... all my anger...and all my pain...Rrrraaaaa! I'll kill you!

Mist: As long as you're alive, this war can not end. How many lives have you stolen with your selfishness?
Ashnard: You ask that of me? You? A girl? Pah! Trivial. You're not worth the effort it would take to kill you.
Mist: Give me back my medallion! You aren't supposed to have it!
Ashnard: Are you...Gawain's daughter?
Mist: I am! And like my father and mother before me, I will protect the world from your madness!
Ashnard: Heh heh... Hwah hah hah hah... Wheeee haaa haaa haaaaaarrr! Perhaps I'll kill you after all! If you are their child, you get special privileges! Show me your might!

“Ike! I'm not going to repeat the same mistake I made with Dad! I don't want you to die while I...while I'm somewhere else. It was horrible... It ate me up from the inside. I'm never going through something like that ever again.”
—Mist speaking to Ike

Healing Breeze (癒しの春風 Iyashino harukaze, lit. The Healing Spring Breeze)
Mist was courted by many young suitors in her time. She gave the nod to none of them, and lived happily alone.
(A Support with Boyd)
Mist acted on her feelings for Boyd, marrying him. She cried during the vows, much to Boyd's chagrin.

Mist is illustrated in the trading card game with the following cards: 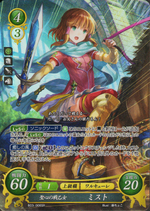 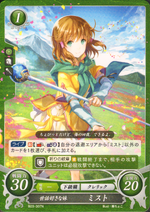 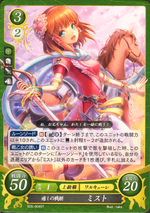 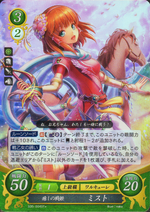 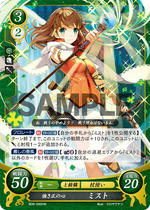 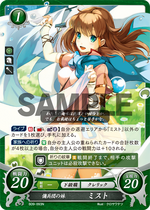 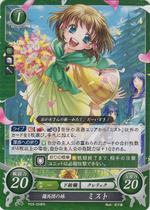 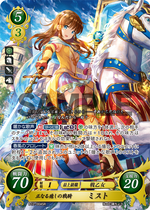 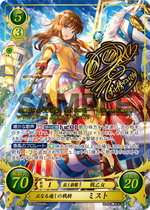 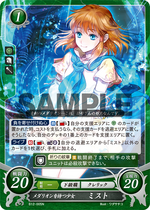 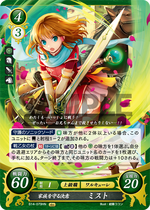 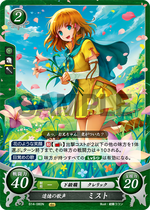 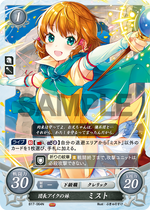 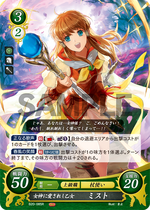 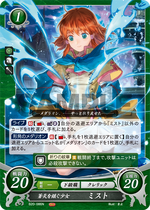 According to the Norse mythological poems Grímnismál and Nafnaþulur, Mist is the name of a Valkyrie. In Norse mythology, they were warrior maidens who brought dead heroes to Valhalla, the heroes' heaven. The name means "mist" or "cloud" in Norse.

The reason why her name was changed in the German versions of Path of Radiance, Radiant Dawn, Awakening and Heroes is because of the German meaning of "Mist", which is a swear word and a designation for trash or manure, making it inappropriate to be used as a name.