Mjölnir (トールハンマー Tōru hanmā, translated Thor Hammer in the Fire Emblem Museum and Torhammer in Fire Emblem Treasure; alternately ミョルニル Myoruniru in Fire Emblem Fates) is one of twelve holy weapons from Fire Emblem: Genealogy of the Holy War and a Tome from Fire Emblem Awakening. Mjölnir is the tome that was used by the Crusader Thrud, bestowed upon him by an unnamed divine dragon during the Miracle of Darna. The tome of Mjölnir is the property of Thrud's descendants, who are the heirs of House Friege of Grannvale.

The Mjölnir tome grants its wielder bonuses of +20 Skill and +10 Speed, and may only be equipped by users possessing major Thrud holy blood, with only those fitting that criteria being Reptor, Bloom, and Ishtar.

The Mjölnir tome reappears in Fire Emblem Fates as a mid-tier tome that acts as the tome equivalent to a Killer weapon.

In Genealogy of the Holy War, this tome is the Holy Weapon of Grannvale's House Friege, a faction that is lead by direct descendants of Thrud's lineage. The tome is first wielded by Reptor in Chapter 5, where he, alongside his fellow conspirator Lombard, are manipulated by Arvis and Manfroy to combat Sigurd's troops. Reptor is slain in the conflict and the tome is passed down to his eldest son, Bloom.

The second generation of the game sees Bloom brandishing Mjölnir against Seliph's troops in Chapter 7 in the defense of Ulster, before giving it to his daughter Ishtar in Chapter 8. Upon her defeat by Seliph's troops in this chapter, Julius enters the scene and warps her to safety. Ishtar later reappears with the tome in Chapter 10, where she engages in a game with Julius, with the victor being the first to slay any member of Seliph's army. She appears once again with Mjölnir in the Final chapter, where she puts up a valiant struggle against Seliph's troops, in honor of the members of her family who crumbled under their might.

Mjölnir is the hammer of Thor in Norse Mythology. Despite its small size and short handle, it is said to hold great power, capable of leveling entire mountains.

The Mjölnir tome, as it appears in the third series of the TCG. 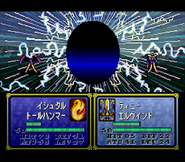 Ishtar casting Mjölnir on Tine in Genealogy of the Holy War.

Ishtar casting a hacked Mjölnir tome in Thracia 776, where it is observed to display glitchy and incomplete animations. 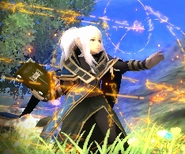 Ishtar wielding the tome of Mjölnir in Awakening.

Ishtar casting Mjölnir on an enemy General in Awakening. 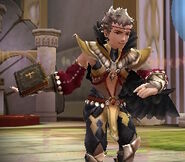 Odin wielding the tome of Mjölnir in Fates.

Odin casting Mjölnir on an enemy Wyvern Rider in Fates.