The Mogall (ビグル Biguru, lit. Bigl in the Japanese version) is an enemy-only Monster class that is first introduced in Fire Emblem Gaiden. Demented eyeballs given life through fell magic, Mogalls employ either Axes or Dark magic as their weapon of choice.

In their original inception in Gaiden, Bigls possess the ability to duplicate themselves, and defeating them quickly is necessary to avoid being overrun by them.

In TearRing Saga: Utna Heroes Saga, the Mogall class is known as the Opus (オープス Ōpusu). Opuses ram their bodies into their foes to inflict damage, and these very bodies are classified as Axes in the game. Much like their Gaiden iteration, Opuses are able to duplicate themselves, and eradicating them quickly is similarly necessary. The mechanics of their duplication are changed, however; each time an Opus duplicates itself, its HP is cut in half and divided equally between the original and the copy.

In The Sacred Stones, Mogalls wield Dark magic as their weapon of choice, and are outfitted with wicked spells. Most Mogalls use the Evil Eye as their primary spell of choice, though a few occasionally use the more powerful Crimson Eye or Shadowshot. This combination can be very dangerous as they are a flying unit that use magic-based damage, although their frail defenses allow for them to be easily dealt with. The promoted form of the Mogall class is the Arch Mogall.

In Fire Emblem Echoes: Shadows of Valentia, Mogalls return to their form in Gaiden, where they can duplicate themselves to no cost of HP. They are equipped with the monster-exclusive "Tackle" weapon. The key again is to defeat them quickly to avoid getting overrun, and this is even more necessary in Hard mode.

"Mogall" is an Irish word meaning eyelid, or cluster. This both refers to their ocular appearance and their ability to quickly multiply and form large groups.

Their Japanese name, Bigl, is a corruption of the Middle French word "bigle," meaning cross-eyed or squinting. 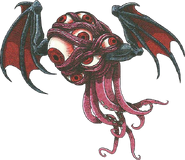 Concept art of a Mogall from Fire Emblem Echoes: Shadows of Valentia. 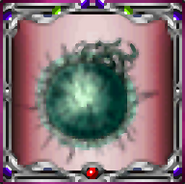 Generic class portrait of the Opus class from TearRing Saga.

Generic class portrait of a Mogall from The Sacred Stones.

Generic class portrait of a Mogall from Fire Emblem Echoes: Shadows of Valentia

Village sprite of a Mogall from Echoes: Shadows of Valentia.

Battle sprite of the Bigl class from Gaiden.

Attack animation of the Mogall class from The Sacred Stones.

Battle model of a Mogall from Echoes: Shadows of Valentia.

Map sprite of the Bigl class from Gaiden.

Map sprite of the Opus class from TearRing Saga.