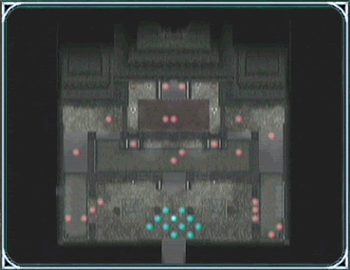 Chapter script
[view]
“Of all the battles in the war so far, the contest for Fort Pinell is the fiercest to date. And from this horrific clash of weapons and wills, the Crimean army emerges bloodied and exhausted, yet victorious. The prize of Fort Pinell is no small thing, but it is the promise of additional reinforcements from Gallia-- and the large Begnion army encamped in Castle Daein-- that keeps the breath of hope alive in the soldiers' hearts. There is one other pivotal piece in Daein's defense of the former Crimean capital-- the severely undermanned Castle Nados. As the day's end draws near, Tibarn's small force of hawks and Gallians cease their attacks and return to camp headquarters.”
—Opening Narration

Moment of Fate is Chapter 27 of Fire Emblem: Path of Radiance. This chapter has two main parts to it. In the first part, your army faces off against Hafedd and his troops. After that, Ike and Mist (if she is still alive) fight the Black Knight.

Strategy against the Black Knight

If you trained Mist, be sure she is level 20/20. Also, training her to a B rank in swords so she can use the Sonic Sword, is notably effective against the reinforcements (even the Bishops). As for Ike, make sure his stats are good enough to survive the fight, and strong enough to harm the Black Knight without the damage being healed off. While trying to pull off Aether on the Black Knight can work, there are other skill combinations to use that can be notably more consistent. For example, Nihil can disable the Black Knight's Luna skill without pulling off the unwanted side-effects of negating your other skills from Parity. Common Nihil combinations include Nihil+Wrath, which allows Ike to activate Wrath without risking being KOd by the Black Knight's Luna skill. Therefore, good stats and a good skill combination are important, should you seek to get Nasir after beating the Black Knight (note: The Ragnell will increase Ike's Defense by 5 when equipped, if you are not running Parity). If you did not or forgot to train Mist, be sure Ike has a few Elixirs in his possession.