For the Fire Emblem: The Sacred Stones character, see here.

Student at the Officers Academy
Heir of House Ochs

Chapter 6: Rumors of a Reaper

Colleen O'Shaughnessey
[view]
“It never occurred to us that something may have happened to her at the Monastery.”
—Hanneman

Monica is a character from Fire Emblem: Three Houses.

Monica von Ochs is the daughter of Baron Ochs, and was a student at the Garreg Mach Monastery Officers Academy in 1179. A member of the Black Eagles, she vanished shortly before graduation, leaving staff with the impression that she ran away. It is revealed that she was, in fact, captured by the Death Knight. Byleth rescues her during the events of Horsebow Moon in 1180, and Monica re-enrolls to finish her education.

In reality, the Monica encountered in the story is none other than Kronya in disguise. The real Monica's whereabouts are not known, though Seteth surmises that she was likely killed so Kronya could freely masquerade as her to infiltrate the monastery and serve as a liason between the Agarthans and Edelgard. Her father appeared to have known of her fate sometime later, but was under the belief that she was still alive and desperately tried to bring her back.

Monica is playful, extroverted, and casual in her interactions. Several students note that she is much more cheerful, overly so, than prior her disappearance. Hilda, who knew Monica from the year before, believes that she is acting this way to pretend she is okay after the ordeal. She also appeared to have a good relationship with her father, and insists on calling Edelgard by the nickname 'Edel'.

In reality this is merely Kronya's own personality peeking out while impersonating Monica. The other students mistakenly believe the shift in Monica's personality is a means to cope with her kidnapping.

Monica is a name of North African origin, whose original meaning is uncertain. Since the Middle Ages, it has been associated with the Latin moneo , meaning "advisor", and Greek monos , meaning "one". 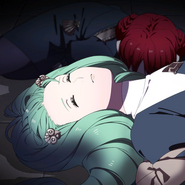 Monica and Edelgard talking to Byleth.