Not to be confused with Luna, a dark magic tome that negates resistance.

Moonlight (ムーンライト Mūnraito) is a spell that debuted in TearRing Saga: Utna Heroes Saga. Initially appearing as a Light magic spell in its original incarnation, it later appears in Fire Emblem Fates as a tome.

In both games, Moonlight functions similarly to the Nosferatu spell, in which it leeches the HP of enemy targets in battle. In TearRing Saga: Utna Heroes Saga, the spell heals its wielder by the exact amount of damage inflicted, while in Fates, it heals its wielder by one-fifth of their maximum HP, but only provided that the attack is initiated by the wielder.

The Moonlight tome also appears as a unique weapon exclusive to Elise in Fire Emblem Warriors, though the spell is also used by Leo among his attack combos. 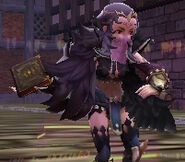 Nyx wielding the tome of Moonlight in Fates.

Nyx casting Moonlight on an enemy Diviner in Fates.