“Me? No...stop. You embarrass me.”
—Ilyana and Mordecai at B support in Path of Radiance

Mordecai is a playable character from Fire Emblem: Path of Radiance and Fire Emblem: Radiant Dawn, and is a warrior of Gallia. Alongside Lethe, he is stationed in Crimea to offer support and to foster relations between the two nations.

In Path of Radiance, it is interesting to note that Mordecai is rather agile even in his human form, as he is able to perform back flips whenever he dodges attacks.

Mordecai is portrayed as one of the more peace-loving and innocent beast laguz characters, and appears to bear no ill will towards the Beorc race. This may be observed through his interactions with Ilyana, where he treats her with kindness and offers her money to purchase food for herself. Mordecai's tender heart has led him to close his eyes before attacking his enemies, as he has no wish to see them getting torn into shreds.

As can be observed through a Base Conversation between several Crimean villagers, Mordecai loves children tremendously, where they comment on how he helped rebuild their village and how the children liked to play with him. His gentle nature shows when he meets Mist, as he admits being afraid that he will scare her with his appearance. He even showed generosity toward Beorc like Ilyana to fill her constant desire for food.

Although Mordecai is Lethe's subordinate, he often reprimands her for her violent and hostile behavior towards the beorc in Path of Radiance. In spite of this, however, he has been shown to be unable to hold back his rage when he is once referred to as a sub-human by Soren. Apart from this one incident, Mordecai has never displayed any other fits of blind rage, garnering the adoration of several beorc individuals with his tranquil nature.

While Mordecai has great HP, strength, and Defense and Smite, he is limited by the transformation gauge. He will start all maps untransformed, and it will take him several turns to actively contribute. His low resistance can make it difficult for him to deal with enemy mages, especially those with Fire magic. Despite these flaws, Mordecai can still be a useful unit. He joins at a time when there won't be too much competition for deployment slots. As a result, he might be able to contribute at times. But as soon as the player has to start choosing units to leave behind, Mordecai will likely be one of the first to hit the bench. By the time the player receives the demi band, he will likely be behind the rest of your army in both levels and stats. Despite his growth rates being high, it will be difficult for Mordecai to catch up to other Laguz that could make better use of it.

Kindhearted Tiger
A tiger warrior from Gallia, the home of the beast tribe of laguz. A kind, peace-loving giant. Appears in Fire Emblem: Radiant Dawn.

Mordecai: You, I know...
Zihark: Mordecai... I never expected us to meet like this, on opposite sides...
Mordecai: Ah! Zee...eehark! Hm... No, that not it. Sorry. Mordecai says your name not right. Not right yet.
Zihark: But...
Mordecai: Zeehork? Zeehar-ack? Zi...hark? Ahh! That is good! Zi-hark!
Zihark: Mordecai... Don't you understand? We're now--
Mordecai: I know. Mordecai is your friend. Allies we are. It does not matter who we fight for.
Zihark: But--
Mordecai: You have no fang or tail, but you are a beast brother, Zee-hark! Hmm... No. Mordecai forgets again. Sorry.
Zihark: Hey, don't worry about it. I've got it! I'll go with you. That way, you'll get my name right in no time.
Mordecai: Ah! Good idea! Mordecai likes this idea.

Mordecai: Graarr! What's wrong? My body. It grows...heavy.
Ike: Mordecai! No matter how strong you are, you can't take much more! We'll take over now! You must withdraw!
Mordecai: Grawr... I understand. I will do as you ask.

"Ike! I will help rebuild Crimea, too. I will lend you much strength!"

Kindhearted Warrior - Mordecai (優しき背 Yasashiki se, lit. The Kind Back)
After returning to the forest, Mordecai avoided battle and lived all his days in peaceful harmony with the trees.

Mordecai is illustrated in the trading card game Fire Emblem Cipher with the following cards: 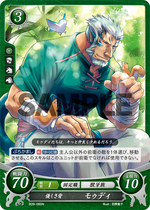 Mordecai is a Persian name that means "servant of Marduk". Marduk is the Persian god who killed the dragon Tiamat and created the world out of her body. In the Old Testament, the book of Esther, Mordecai was one of the Jews living in Persia during one of the periods of Israel's captivity with his cousin Esther, with whom the Persian King Xerxes falls in love with. Esther and Mordecai succeeded in stopping the King's advisor Haman from killing all the Jews living in Persia.