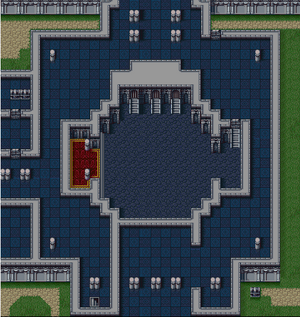 Eyvel and Nanna are immediately under your control; take advantage of this, and move them towards the arena's northeastern exit, toward the door. There are three powerful enemy units hell-bent on them, and Nanna will not stand a chance against them. Have Nanna up against the door while Eyvel holds them off. While you make your way towards the door, have Asbel attack the fighters from the other side of the wall; with luck, he'll critical with Grafcalibur. Each time one of the gladiators is killed before the door has been opened, a new one will spawn. Try not to kill too many of them before opening the door; after the fourth is killed, Galzus will enter. He is far too powerful for you to deal with at this point in the game, so it is best to avoid fighting him altogether.

After a few turns, Mareeta will appear with the Shadow Sword in the arena. However, Eyvel will not strike back.

Unlocking the arena door will have Leif move immediately to Nanna's side, regardless of his position on the map prior to this. He will also stay gray or blue depending on whether he moved or not. From there, Eyvel will be in the Arena's watch-chamber (completely inaccessible from the player), and turned to stone. Mareeta will also be warped out of the Arena, if she appeared. However, the gladiators in the ring facing Eyvel, will not; take caution and be ready to face them before you open that door.