Karen Strassman
[view]
“I don't have any fancy fighting moves like the rest of you folks... And I'm no tactician, neither. So I want to help with the things I DO know how to do.”
—Mozu, to Ryoma

Mozu is a playable character in Fire Emblem Fates and an ally on all three of the routes.

Mozu is a villager from Hoshido, who until the days war broke in had lived peacefully in a small village in the border between Hoshido and Nohr.

In her Paralogue, her village is attacked by the Faceless, killing everybody else. As Mozu and her mother nearly make it out of the village, her mother is killed by one of the Faceless and Mozu survives just because she managed to hide in the nearby woods. As luck would have it, she would be rescued by Corrin and their army, who had been told about the attack and were looking for survivors. Faced with few options, since she is by herself and has nothing of value anymore Mozu joins Corrin's army, and strives to be useful to their cause and to make up for everyone else's sacrifice.

Often portrayed as a meek character with low self-confidence, Mozu is hesitant to attempt new things that she is not particularly adept in. Her supports depict her as such, where she requires the encouragement of her conversational partners in order to pick up skills that are useful to her on the battlefield. Her supports with Silas and Ryoma particularly support this fact, as both men offer to personally train her, to which she does not accept at first but eventually agrees in order to move on from her trauma, be of use to Corrin's army as a soldier and prove to herself that she does have courage. Otherwise however, her supports reveal her to be in possession of a blunt, unabashed personality in things she knows about, where she does not hesitate to point out the mistakes committed by others and their flaws. She is also one of few female characters in S supports who consistently and proactively asks for her love interest's hand in marriage.

In truth, she is actually physically robust. As revealed in her supports with Corrin, her life as a villager is one that demands her to engage in manual labor such as crop cultivation and animal hunting for sustenance and has grown surprisingly strong for someone of her age as a result. Not only that, Mozu has acquired, if not excelled in, a variety of skills and traits that has helped her throughout her life on the farm and still helps significantly as a member of Corrin's army. One of Mozu's more recognizable talents is cooking. When taking shifts in the Mess Hall, if she cooks food of a good quality, she will proudly mention that back home, the villagers often asked her to cook. Such talent is further confirmed through her supports with Saizo, where her cooking reminds him of the food native to his home village, stating that he prefers it over the heavier food commonly served in Shirasagi. Her hunting and trapping skills are also among the best in the army, as she hunted a bear single-handedly from learning skills and tricks from an old man in her village prior to the Faceless attack and is capable of hunting boars alone.

Mozu is also known to possess a humble spirit, not valuing any wealth or luxuries and preferring a simplistic lifestyle as opposed to an extravagant one. This is made evident in her supports with Oboro where, in response to Oboro cheerfully remarking that her endearing appearance will be enhanced with the right clothes and makeup, she quietly states that they will not obscure the fact that she is, at heart, a country girl.

Mozu is the Villager character of Fates. She starts off with extremely poor stats typical of her archetype. The later she is recruited, as her paralogue is not mandatory, the more of a liability these low bases make her, especially in Conquest. In Birthright and Revelation as well as the availability of Boo Camp, this is less of a problem as the external battles can be adjusted to train her up to speed with the army at the moment. If she is given enough training, she grows splendidly compared to most Fates first generation units thanks to her Aptitude skill, boosting her growth rates for all stats by 10%, raising nearly all of her stats, except her Magic and Resistance, to at least 50%. When trained up to Level 10, she learns Underdog which increases her hit and avoid when battling foes of higher level, which Mozu will have to deal with most likely as she trains. Once properly trained, Mozu becomes a potent offensive unit and a master of terrain thanks in part to her personal skill, Forager, which heals 20% of Mozu's maximum health at the start of the turn if she is standing on a Mountain, Forest, Field, or Waste tile. In most of the late game maps, her personal skill loses some potency as the lack of indoor terrain options drop the usability of the skill.

Unlike the Villager class in Fire Emblem Awakening, this iteration of the Villager class can promote, and both promotions still retain usage of Lances, so training her with lances are not lost upon class changing. The Master of Arms class highlights versatility, having access to Swords, Lances, and Axes; making her the Hoshidan equivalent of a Great Knight, offensively. While it does not have standout stats to cement her in a particular role, there are advantages. Seal Strength can cripple high damage enemies and, if she has proper defense stats, set up safer kills for other units. Life and Death is a risky skill that gives herself and her opponent more base damage. If willing to use this skill, expect high risk for high reward.

Her other option is the Merchant class, which emphasizes utility. The Merchant's stat caps emphasize defense and strength at the expense of speed, and are overall not as good a match for Mozu's growths as those of the Master of Arms. It adds Bows/Yumi into the mix, and its two skills are built around each other. Mozu's high Luck (including its growths) makes her a good user for Profiteer, which gives Mozu a chance (based on her Luck) to obtain a Gold Bar for the first 7 turns of the map. Spendthrift allows Mozu to expend a Gold Bar when attacking to increase her damage by 10, while reducing damage taken by 10. It is a much more beneficial version of Life and Death, though Mozu must have Gold Bars readily available to utilize it. If the player has other characters with the skill, they can utilize them to help Mozu acquire Gold Bars and vice versa. Alternatively, having a stockpile in the Convoy can work as well, but Corrin must be on the map in order for that to work.

Mozu's secondary class is the Archer class. As an Archer, Mozu benefits from avoiding the front lines, where her low HP stat could give her trouble. This gives her an immediate niche in Conquest, where enemy Sky Knights are numerous and player-controlled archers are few and far between, but are of dubious value in Birthright. Archer provides Quick Draw, which increases Mozu's damage by 4 when initiating combat. Although she will drop her Lances, promoting to a Sniper makes her excellent for taking down enemies with high critical rates and skill activations if she has any. It also gives her Certain Blow to increase her Hit Rate when initiating combat, and Bowfaire to add more strength to her bows. The Kinshi Knight class could be considered an aerial, glass cannon version of the Merchant class as it has the same weapons, but with more mobility and emphasis on Speed and Skill. Even if Mozu is not kept in this class, Air Superiority can give Mozu good presence as an anti-aerial unit, good for some of the late game, heavily Aerial enemy maps, and Amaterasu to give her allies a heal zone. Finally, reclassing Mozu into an Archer gives her time to raise her bow rank before going into the Merchant class.

Mozu is illustrated in the trading card game Fire Emblem Cipher with the following cards: 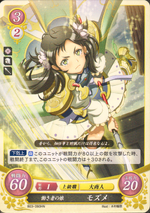 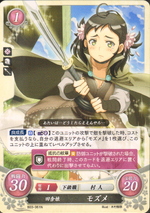 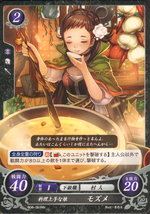 Mozu is the Japanese word for a shrike, a Eurasian species of bird.