Kevin Urban
[view]
“I was once a slave. The nobleman who was my master made me sharpen his blades for him. I was quite adept at it. He would bring them to me unannounced. If I did not have the proper materials to sharpen his swords, he would beat me. I still do not feel comfortable unless I have these materials near me.”
—Muarim talking to Zihark in a support conversation

Muarim is a playable character from Fire Emblem: Path of Radiance and Fire Emblem: Radiant Dawn. He is a Tiger Laguz, and is a former slave of the Beorc race. Muarim acts as a father-figure and best friend to Tormod, and fight the Begnion Occupational Army to liberate enslaved laguz.

Prior to the occurrence of Chapter 15, Begnion labels Muarim and Tormod as errant bandits, whereupon Ike's forces are sent to eliminate them. When Ike's forces later encounter the pair in the Grann Desert, Muarim jumps into action to protect both Tormod and his stronghold. It is later revealed that Sanaki is actually trying to expose the senators' crimes of enslaving laguz, and sends Ike's forces to the desert in order to make contact with the Laguz Emancipation Army, spearheaded by Muarim and Tormod.

Muarim will then remain with Ike's forces until the game reaches its conclusion.

Returning with Tormod and Vika, Muarim assists Micaiah and Sothe in freeing imprisoned Daein soldiers in Part 1 Chapter 7, ultimately playing major roles in liberating Daein from Begnion's rule. During the course of these events, Izuka attempts to use him as an experiment subject for turning laguz into Feral Ones. Just as Muarim is about to reach the breaking point of his sanity, Rafiel sings the Galdr of Rebirth to calm his enraged soul. This ultimately leads him to promptly return to Gallia upon Part 1's conclusion.

Muarim later returns in Part 4 with Tormod and Vika, encountering and battling Oliver's forces alongside Ike's army. He may be brought into the Tower of Guidance, where he will work to defeat Ashera and free the continent of Tellius from her cold judgment.

Muarim is an honorable individual, as he constantly seeks to protect other people around him, one of whom is Tormod. He tends to be quick in accepting punishment when he feels he has spoken or acted out of turn, apologizing profusely for his mistakes. This could be an after-effect of his days in slavery.

Muarim also detests the idea of children participating in battle skirmishes, as can be observed in Chapter 15 of Path of Radiance, where he refuses to engage Rolf, Mist, and Sothe in battle.

Muarim joins with the Demi Band which negates the major weakness of Laguz units even though he doesn't get to reap the full benefits of transforming. If given proper training, he can snowball to compensate for the Demi Band's drawbacks. However, it can be difficult to justify getting him that far, as many units perform just as well as him with less investment.

Muarim joins with Tormod and Vika in Chapter 7 of Part I, with some of the highest base stats for a non-royal laguz in the game, and decent growths compared to other laguz. In Part I, unless you leave him untransformed to attack enemies, he will always gain 1 or 2 EXP, so training him isn't really an option. With such bases though, Muarim will make quick work of any enemy on his path, and can be plenty helpful during the Epilogue just to catch up with the thieves thanks to his high movement both transformed and untransformed, although for that he will have to go through many enemies that the Dawn Brigade would like to take care of by themselves. Muarim can still be used for rescuing and as a "panic button" should things get too hectic for your team to handle, even if by Chapter 8, you should have plenty enough units capable of fulfilling these functions.

As a Tiger, his transformation gauge, though still something you'll have to deal with as an inconvenience, shouldn't be a huge issue, however do preemptively get a set of Olivi Grass for him in Chapter 8, he will make good use of it, even if when untransformed he still deals a bit of damage and survives well in Part I, contrarily to many other non-royal laguz units in the game. When transformed, Muarim is near invulnerable in Part I, only fearing Fire Mages, and lacking 1-2 range like all laguz.

Muarim comes back along with his team in Part IV during Ike's route, a chapter before the Tower of Guidance. While Tormod and Vika will struggle really hard, Muarim doesn't suffer as much; he is hands down the most competent and durable of the lot, but will normally still be subpar in comparison to your army in a few areas. His Strength is still great, although still limited by A Rank Strike, he has a lot of HPs, and his Defense should be higher than most of your units and with a very high cap of 22 (44 transformed), but his biggest weakness by Part IV will be his Speed and his Luck; on his rejoining map, he is going to get doubled by most of the enemies on the map, and his lack of Luck makes him prone to receive critical hits galore. As such, training him untransformed here is near suicidal. It doesn't help that his Speed growth is very low.

Stat boosters shouldn't be a huge argument, especially if you don't intend to use him passed this chapter, as the Endgame maps come right afterwards, but in case you absolutely want to, and since laguz units pretty much double every stat gain due to their transformation (except Luck), giving Muarim a Speedwing will fix his Speed problem and allow him to get much closer to his underwhelming cap of 15 (30 transformed), though no one will ever double him at 30. To mitigate the critical hits issue, try to put Tormod next to him, as their bond will give them a bonus of +10 Critical Evade and Critical Rate. Be mindful of Tormod's placement though, as he will definitely kick the bucket should he get attacked by a physical strike. Muarim's Resistance is also quite shaky by this point of the game, and is only 1 point short of capping it, at this point of the game he should definitely try to avoid tanking Fire tomes.

Tiger caps aren't much to write home about, but with great bases in some important areas, Muarim's stats will be good enough for the Tower of Guidance with a bit of training, he is definitely workable with minimal effort (especially compared to the other non-royal feline laguz), though not necessarily great. If you don't intend to bring any royal for challenge or personal reasons, as a laguz, he is still one of your best choices.

Raw Instinct
Warrior of the Laguz Emancipation Army, his mind lost after he was forced to consume the potion use to create Feral Ones. Appears in Fire Emblem: Radiant Dawn.

As Begnion's first-ever laguz official, Muarim assisted Tormod and supported his efforts in every arena.

As Begnion's first-ever laguz official, Muarim labored mutely on in memory of his dead friend Tormod.

Muarim is illustrated in the trading card game Fire Emblem Cipher with the following cards: 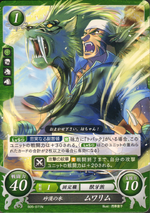 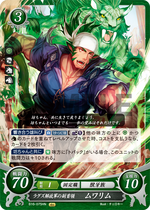 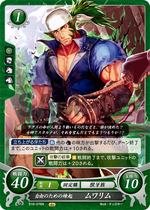 Marum is a Mediterranean plant with a smell known to be attractive to cats. This plant is also known as 'cat thyme' and 'Teucrium Marum.'