Priest
[view]
“I know I was all pumped up when we left Isaach, but now I'm... I'm scared. Just seeing everybody fighting and all... Well, one of us is gonna get killed sooner or later.”
—Muirne to Seliph

Muirne is a playable character from Fire Emblem: Genealogy of the Holy War. She is the substitute character of Lana if Edain is not paired up. She is the sister of Deimne.

Muirne is a commoner, raised in Tirnanog, with her brother Deimne, Seliph and the other orphans. In the opening chapter, when the imperials are invading the village, Seliph says to Muirne to stay back and heal the people that can be eventually injured, but she insists that she wants to go together to the battlefield.

In Chapter 8, after Conote is captured, if all the recruited characters in the second generation are alive, Muirne can have a conversation with Seliph in which they confess each other that they are scared and fear that they could die soon. They realise that they should keep fighting though, for the sake of their comrades and for a brighter future.

In the final chapter she can have a conversation with Asaello in which they lament their lack of holy blood, and how life can be unfair to peasants like them. Muirne is more positive and realise that not everything is about their circunstances at birth, since they worked hard to stay alive and to reach their current instace at life.

She will be the Queen of Isaach if she is paired with Shannan. In another scenario, if she marries Leif, she will turn Queen of Thracia. She will go to Yngvi with it's heir, Febail, if they have an end together. And finally, should she marry Oifey, she will became the next high duchess of Chalphy.

If she is not paired at all, she will return to the orphanage of Isaach with her brother Deinme.

Muirne and Lana share similar personalities: They are both kind, selfless, sometimes stubborn, and more than willing to provide assistance to those who need their help. She also has an adamant determination to fight against the Grannvale Empire, due to her strong moral compass rejecting their evil practices.

However, Muirne suffers from a lower self-esteem than Lana, mainly due to the fact that she is a mere commoner lacking Holy Blood. This causes her to feel inferior to practically every one else in the army, particularly Seliph, whom she harbors feelings for. This self-demeaning attitude of Muirne is further reinforced in conversations shared with her older brother Deimne, who faces the same problem as well, and her possible lover Asaello.

Muirne serves as a substitute character for Lana if Edain does not take a husband or survive in the first generation of Genealogy of the Holy War. Like most other substitutes, Muirne will generally not measure up to Lana unless a particularly poor pairing is made for Lana. While Muirne cannot inherit high end Staves like Lana can and she will not statistically match Lana, she does a reasonably good job of filling in for her compared to other substitute units. Muirne only begins with a Heal Staff and will lack things like the Physic Staff or Rescue Staff, which are very powerful and convenient tools for her class. She will, however, quickly gain access to a Recover Staff in Chapter 7, allowing her to heal any unit to full life rather easily. So while she probably will not be able to match up to Lana's initial versatility, she is perfectly capable of fulfilling her healer role effectively.

Compared strictly to other substitutes, Muirne is okay. She starts off with great base stats aside from her very poor HP and Defense. In particular she has quite a lot of Resistance, though it is of dubious worth since many late game enemies wield powerful Tomes such as Yotsmungand, which will tear through her Resistance and low HP. Despite her relatively strong bases, her growths are the worst even among substitute characters (though not quite the worst in the game), so she is unlikely to turn out exceptional statistically. This, however, is not really a big problem as healers in Genealogy of the Holy War generally will not see combat much, and Staves within the game are so ridiculously effective that even if the wielder has almost no Magic, they can generally heal most units to full life with a Mend Staff or Recover Staff. Eventually, when Muirne promotes, she will gain some limited ability to protect herself or do respectable single hit damage due to her high Magic, but her lack of Pursuit (or any skills for that matter) will prevent her from ever really doing much beyond weakening enemy units into kill range occasionally.

All things considered, Muirne and her brother Deimne do a moderately good job of replacing Lana and Lester. While they certainly are not equals, they both fulfill their roles more effectively than most other substitutes do.

In Chapter 6, if Muirne talks to Julia, Julia will gain a Mend staff.

In Chapter 6, if Seliph speaks to Muirne after Sophara is captured, Muirne will gain three points of HP and 100 love points with Seliph.

In Chapter 10, if either Asaello or Febail speaks to Muirne, she will gain three points of HP and 100 love points with whomever initiated the conversation.

In the Final Chapter, if Muirne is lovers with Asaello, she will be able to speak to him after Edda Castle is captured. This will result in Asaello gaining five points of HP.

In the Final Chapter, if Muirne is lovers with either Seliph, Ulster, or Dalvin, she will be able to speak to the lover in question after Dozel is captured. This will result in her lover gaining three points of magic defense.

Miurne means "festive" in Irish Gaelic. In Irish legend, this was the name of the mother of Fionn mac Cumhail. 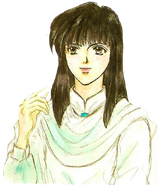 Official artwork of Muirne from the Super Tactics Book.

Muirne, as she appears in the first series of the TCG as a Level 1 Priest.

Muirne, as she appears in the second series of the TCG as a Level 10 Priest.

Muirne as she appears in the third series of the TCG as a Level 20 High Priest.

Muirne's portrait in Genealogy of the Holy War.

Muirne's battle sprite as a Priest in Genealogy of the Holy War.