General
[view]
“Hm...You have made it far. I congratulate you. But can you defeat me?”
—Murdock's battle quote in The Binding Blade

Murdock is the humble military commander of Bern, leader of the Three Wyvern Generals, and second only to Zephiel in the Army of Bern.

Originally a commoner by birth, he quickly rose through the ranks and esteem among the army of Bern and was later appointed the personal bodyguard of Prince Zephiel.

He is first seen in a village near the border between Bern and Lycia. If the player visits one of the houses, they encounter Murdock talking with a Bern soldier, who tries to explain to Murdock that they should not allow King Desmond's tyrannical approach to ruling to continue, but is silenced by Murdock, who has noticed an intruder listening in on the conversation, who quickly leaves the house.

During Eliwood, Hector, and Lyn's infiltration of Bern Keep in order to find the whereabouts of the Fire Emblem, they spot Murdock arriving at the castle with Zephiel to present a captured baby fox to Guinivere. When Desmond arrives and lashes out at Zephiel, Murdock attempts to speak in defence of the prince, but is silenced, with Desmond demanding his loyalty as his actual master.

In preparation for the Black Fang assassination attempt on Zephiel, Desmond concocts an errand for Murdock to keep him away from Zephiel's manse for the night, not wanting to risk losing a general of such talent. Frustrated by being kept from the prince's side for no apparent good reason, Murdock is shocked to hear of the events of the night from one of his men, and tells Queen Hellene what had happened and how close Zephiel was to dying, convincing her to assist Eliwood's group.

As Eliwood, Hector, and Lyn's group travels to the Shrine of Seals, Murdock appears before them in a nearby village, quietly offering them a Warp staff as thanks for their assistance in protecting Zephiel.

Fifteen years after the events of Blazing Sword, when Desmond attempts to poison his son, Murdock helps Zephiel recover and later assists in faking Zephiel's death, resulting in Desmond's death at Zephiel's hands.

During the events of Binding Blade, he leads the invasion of Ilia. He is not seen until the battle at Aquleia. Before the battle, he confront Narcian, demanding an explanation for his recent failures. He then tells Narcian that he is to be demoted from the rank of Wyvern General, with Murdock's former lieutenant, Galle, to replace him. However, Murdock tells him that if he can stop the Lycian Army from retaking Aquleia, he will try to convince Zephiel to restore him to his original rank. Before leaving, he orders Galle to watch the ensuing battle.

Later, at Remi Castle in Ilia, Murdock receives word of Narcian's death from Galle. Roartz and Arcard, two former Etrurian nobles who had sided with Bern, have fled to the Bern-occupied territory, and attempts to seek refuge with Bern. However, Murdock instead orders them to defend some of Bern's captured territories in Ilia, teling them that they would have to personally reconquer Etruria should they want to control it themselves. Afterwards, he and Galle discuss the nature of his ultimatum to Roartz and Arcard, and he states that he is impressed with the work of Roy, the new leader of the Etrurian army, and that he would like to personally duel him one day.

Ultimately, Murdock, along with Galle, is deployed to the Shrine of Seals to serve as a final line of defense against the invasion of Bern. Before the battle, Murdock tells Galle how impressed he is with the opposing army and especially Roy, and greatly appreciates the chance to test Roy's skills in person, while regretting that circumstances have forced them to fight Milady and Zeiss, who had already defected to Roy's army. After a long battle, he is defeated and killed. Before dying, he states that his only regret is that he can no longer protect Zephiel.

Murdock is a very strong combatant. He has unparalleled accuracy and massive defense, even without the throne advantage, fair resistance, and high strength. He is also the only possessor of the Tomahawk, the axe's equivalent to the Spear. In case for promoting any late Knights and Cavaliers, he also possesses a Knight Crest that can only be retrieved by a Thief, as there are no dropable items in this chapter. Despite all of his glory in and outside of game he is fairly easy to beat with the right strategy.

You could combine any of the previous tactics in case characters are too weak to do the job on their own.

“At last, the great General Roy stands before me! I have been waiting to match blades with you!”
—Murdock to Roy
“Melady... I don't want to fight you, but you stand here before me. It seems we have no choice. Come!”
—Murdock to Melady
“You were one of Narcian's troops... I heard the story from Galle. I do feel sorry for you, but you are currently an enemy. Come! We fight!”
—Murdock to Zeiss

Murdock is illustrated in the trading card game Fire Emblem Cipher with the following cards: 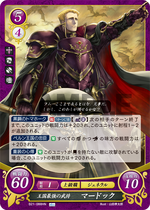 Artwork of Murdock in Fire Emblem 0 (Cipher) by Kotaro Yamada.

Murdock's portrait in The Binding Blade.

Murdock's portrait in The Blazing Blade.

Murdock's appearance in Hasha no Tsurugi.