Mutiny in the Mist

Mutiny in the Mist 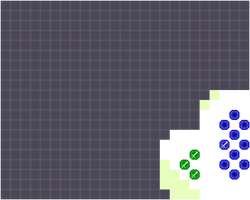 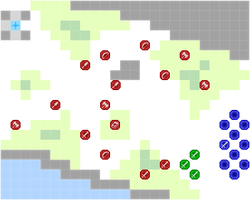 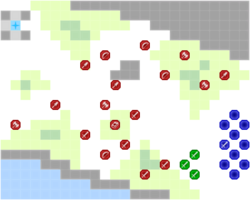 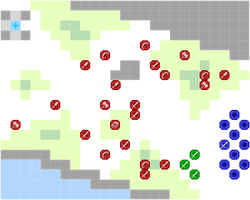 Chapter script
[view]
“Lord Lonato is a minor lord of the Kingdom. He has been showing hostility toward the church for some time now. Lord Lonato's army is nothing compared to the knights. It's quite possible the rebellion has already been suppressed.”
“Even so, I would like for your class to travel with the knights' rear guard to deal with the aftermath.”
—Seteth and Lady Rhea

If the player has purchased the DLC content, they can recruit Anna from this point onwards. Unlike most recruitable characters, you do not need to meet any requirements to recruit her.

When the lone Dark Mage in the center of the map has been defeated, the Fog of War will disappear and reinforcements will appear in the top-left corner.

No enemies drop items in this chapter. However, if all allied units (Catherine and her two Mercenary allies) survive the battle, you will gain a Secret Book and Goddess Icon as rewards.

This map is a Fog of War map, obscuring most of the battlefield from view. It is recommended to bring at least one Torch in this map. The victory condition is only to defeat Lonato, even if other enemies still remain. Catherine and her two Mercenaries will advance towards the fog, but as allied units none of them will gain EXP upon defeating an enemy.

Advance into the fog and use a Torch to increase vision. It is recommended to use a unit with good Defense, so it can withstand the Archer's attacks. You will soon encounter a Dark Mage unit alone in a forest. Defeating them results in the fog being lifted and the Torch no longer being necessary, but additional enemies will appear, including Lonato. Your first priority is the Armored Knight who is between you and the boss. If your units are all physical attackers with weak stats, you can let Catherine deal with the Knight, though the enemy Knight might target the allied mercenaries and jeopardize the optional reward. However, with high enough Strength, it is easily possible to defeat it on your own.

Lonato is a Paladin, the first enemy you face with an Advanced Class. As he is a cavalry class, units with the Combat Art Knightkneeler and wielding a lance can significantly damage him. He starts with an Iron Lance and will switch to his Javelin if his desired target is 2 spaces away. Bows are efficient to damage him, but if he wields the Javelin, you may wish to use Curved Shot to avoid counterattacks.