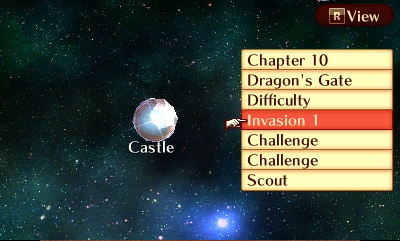 Later, after the events of Chapter 6 in any path, Lilith brings Corrin and either Felicia or Jakob depending on Corrin's gender into the Astral Plane where they decide that the area will be used as Corrin's main base when not in combat.

My Castle is a customizable base of operation available in all routes of Fates. Like the Barracks in Awakening, My Castle is a gathering place for the player's army and certain events can be triggered by the characters there. These events refresh every time a map is completed or certain time in the real world has passed. My Castle is mainly viewed from the top down view with Corrin portrayed by their map sprite, however, they can toggle their view to see the base from a 3-D third person perspective. Characters in the Player's army can also be found wandering in the area and can be interacted with for a variety of events as well as unique dialogue depending on the time of day. In order to build and upgrade facilities, players need to acquire Dragon Vein Points by participating in battles or visiting other My Castles. All features and upgrades requires that the player reach a certain chapter in game in order to use.

My Castle also serves as the main hub for StreetPass. Players are given a Ranking, similar to Renown in Awakening, but divided into a Battle and Visitor Ranking. Anytime a player StreetPasses any player with any version of Fates, they will receive a visitor Avatar. Players can then visit their My Castle and make usage of their facilities, including their Shops and Resources.

Alternatively, players can battle other players. They have the option of placing the battle in either their own castle or the other player's castle. Buffs added respectively; e.g a player who decides to fight another player in their castle will find themselves in a disadvantage. Several buildings in the castle will give these buffs/debuffs; for example, the Dusk Dragon statue drops all opponents health by a set amount, while another like the Mess Hall increases that castle garrison's hit rate. These buildings can be destroyed, in which their effects are removed. Buildings are always rebuilt at the end of every battle. To win a castle fight, players must either rout the opposing forces while protecting their throne. If a enemy unit gets on the throne, the player will lose. If the player besieges another player's castle, they can alternatively capture their throne instead. Players do not need to worry if their units are defeated in battle; PvP battles follow a Casual Mode setup.

Victory nets the player several benefits that they can use to their aid. If the player performed the battle in their castle, they can add one of the other player's 10 units into their logbook. If the player fought at the other player's castle without any changes (e.g handicaps), they can either recruit one of their 10 units or inherit a skill at a reduced cost. Players who decide to inherit a skill must have that character in their army and the cost of the skill is based on how much skills your unit already had and how useful the skill is. Logbook units cannot be recruited into the player's army. It should also be noted that DLC and Amiibo related skills can also not be purchased.

The player's (and their opponent) castle can also be used as two of the options in Wireless Battles; in this case, puppets/golems are not deployed and statue effects are disabled. Players can still recover health from forts/healtiles and lose health from caltrops. Buildings such as the Mess Hall still provide their bonuses to both armies though.

On all routes, the player's castle is subjected to invasions by Vallite soldiers. There are three different groups of invasions for each game, unlocked when a player passes a specific chapter. The victory conditions are similar to that of battling a player at your castle, so rout all enemies and protect the throne.

Invasions are unsafe battles, meaning that if your units fall in battle on Classic Mode, they will be taken out of the game.

Players can customize My Castle through their advisors. Initially, the player starts out with Felicia or Jakob as their advisor, depending on their gender. When Gunter and Flora are unlocked, they may be used as advisers as well. Generic units are also available once certain requirements are met. For example, Hoshidan generic units can be placed as an advisor once the Birthright path has been completed once. However one can choose to have generic 'low-rank' units act as the advisor as well. In Birthright one can have a Villager of chosen gender fill the role, in Conquest a generic Lancer/Troubadour can do so instead and Revelation allows for all four units to be made available from the start.

There are six available styles for My Castle, three each for Birthright and Conquest. Revelation allows for all six to be used at any time. However, players can access other castle styles that their path does not have provided that they have beat that path once on any difficulty.

To access the Logbook, speak with your Advisor and select the "Unit Logbook" feature. When selected, a logbook will appear with four different sections: Einherjar, Bond, Guest and Prison Units.

Einherjar units can be obtained from both the Einherjar shop (although they are in a fairly poor state), My Castle battles and from completing Endgame, in which you can select five of your units in that file to be put into the Logbook. After every Endgame is completed, players can transfer up to five of their units into the logbook. All skills that they have learned will also be available, so you do not have to put your most desired skills to learn in subsequent playthroughs.

Bond units are obtained by giving items to other player's Avatars, although this is usually rare. Bond units will share the class of either Avatar and like children units, will inherit two skills which are from the last skill slot for both units. They may also carry a personal skill (which can be either that of a generic class skill or a character-unique skill).

Guest units are obtained by scanning and defeating an amiibo. For example, once an Ike amiibo has been defeated from a Hero Skirmish, he will be added into the Guest logbook regardless if the player doesn't wish to recruit him or not. If playing on a new file afterwards, scanning the amiibo will be optional if one doesn't wish to spar with them to recruit them since they can simply purchase them from the logbook for a certain cost of fee. However, they can still be scanned for their unique accessories. Even though the amiibo logbook units do not show their signature weapons, they will always come equipped with them if recruited.

Prison Units are obtained by capturing generic enemies in either Campaign or Skirmishes with Niles and/or Orochi. Prison units are unique to that player only, so a player cannot get another player's prison units (e.g Haitaka) if they were featured in that player's defense and won the battle. Like Einherjar and Bond units, Prison Units bought from the logbook will have skills that the player had obtained themselves even if their skill slots are full.

Every player's Unit Logbook is unique. This Logbook can be accessed by all of the player's files no matter what path they are playing; for example, if a player had captured and trained generic units in Conquest, those units can be used in Birthright and Revelation by simply recruiting them from the Logbook. It is advised to continually update the roster so all units will be up to date, especially if they fall in Classic Mode where you can simply rehire them without having to grind up weapon ranks/stats again.

Up to 99 units can be kept in the Logbook at any time; by "locking" a specific unit, they will not be removed if the logbook gets completely filled.

The available buildings are listed below:

Players can add numerous purely defensive features in their My Castle for usage during StreetPass defense battles. All Installations are determined by the route being played, however all players that are playing the Revelation are given access to all Installations.

The type of Gathering Spots available in a My Castle is determined by the route the player is currently playing:

- If the player is playing either the Birthright or Conquest routes, they are given two Gathering Spots: one for Gemstones and one for Foodstuffs.

- When visiting other player's My Castles, the player may gather resources from that player's Gathering Spots.

Players can normally only obtain another player's My Castle resources once every real-time day. However, should the player visit 30 My Castles in less than 24 hours and either utilize a facility or battle their My Castle teams in all of them, they are given another chance to revisit a previously visited castle and redo another round of actions, including their resources.

Both resources can be gambled at the Arena and can be used to buy accessories from the Accessories Shop.

The inside of the Private Quarters.

Lilith, a character that appears in My Castle.

Orochi by the Prison.

Male Avatar and Orochi sitting on a bed in the Private Quarters.

Male Avatar and Orochi in My Castle at night.

Female Avatar looking at the throne in My Castle.

Female Avatar in the Accessory Shop.