Doug Stone
[view]
“Before you dream of changing the world, learn your damned place in it!”
—Mycen

Mycen is a playable character from Fire Emblem Gaiden and its remake, Fire Emblem Echoes: Shadows of Valentia. He is 65 years old.

Mycen is a reputable former soldier known throughout Valentia. Originally a Rigelian early in life, he later became a high ranking Zofian general when he later moved into the southern country. In his famed military career, he became an exemplary knight whom many have admired as the finest soldier to have ever existed. In his older years, Mycen settled down in Ram Village, raising his grandson Alm.

One day, the Villa of the Zofian royal family was set ablaze by Desaix in a coup of the Zofian throne. Mycen entered the burning villa and managed to rescue the young princess, Anthiese. Concerned for her half-brother, she asked if Mycen found Conrad. To her disappointment, she was the only person he could find, leaving her the sole survivor of the fire. Believed to be dead by the Zofian people, Mycen brought Anthiese to Ram Village and adopted her, renaming her Celica for her safety. For a while, he raised Alm and Celica and taught them alongside the Ram Village children, Tobin, Gray, Kliff, and Faye the art of combat. Shortly after, Desaix's crony, Slayde stumbled upon Ram Village and discovered Anthiese's survival through her brand on her hand. Though he was repelled by Mycen, Mycen was forced to send Celica away for her safety once more, bringing her to Novis Priory to further prevent anyone from ever encountering her again.

During the ten years after this event, Mycen spent the years training Alm and the Ram Village children. Feeling that he was ready and properly trained, Alm asked Mycen if he could leave the village, which Mycen declined, saying that he was too green. Lukas came soon after seeking Mycen to help the Deliverance, a Zofian force dedicated with overthrowing Desaix. However, Mycen was nowhere to be found. In his stead, Alm volunteered and joined the Deliverance.

After a long campaign through Zofia and Rigel, Alm lead the Deliverance all the way to Rigel Castle where he fatally wounded Emperor Rudolf. Rudolf, and later Mycen, reveals that Alm was not truly Mycen's grandson, but rather Rudolf's only son, having being entrusted into Mycen's care.

Further detailed in a Memory Prism, Emperor Rudolf summoned Mycen shortly after his son's birth. As a long time friend of the Emperor, he informed Mycen that Alm bore a special brand on his left hand, a mark that was a sign that Alm would be the hero who would end the rule of Mila and Duma on Valentia. Rudolf then vowed that when the time came, he would become a conqueror whom his son would face and defeat in order to truly become the hero of Valentia. To keep his son's existence a secret until his plan could come to fruition, mainly to protect Alm from the Duma Faithful, Rudolf requested that his old friend take Alm and raise him so that he would eventually fulfill his destiny.

After the revelation of his origins and duty, Alm follows through his father's grand ambition for him. Determined to see him through, Mycen joins Alm's army to fight against Duma and eventually bears witness to Alm slaying Duma, thereby ending the influence of the Divine Dragons on Valentia. In the aftermath of the war, Mycen worked tirelessly as the new Chancellor of the One Kingdom of Valentia for a few years. When he retired, Conrad succeeded his position.

A knight of great fame both in Rigel and Zofia, Mycen is a dutiful knight and often revered by the masses of both nations due to his might and chivalrous nature. He is an extremely respected individual, earning the admiration of the members of the Deliverance and the Ram Village children. Even in his much older age, his prowess in battle has never dwindled and is noted by Alm and the Ram Village children to be a particularly harsh instructor, but an effective one.

Kind and caring, Mycen is greatly beloved by Alm and Celica who both affectionately treat like a grandfather. Even after the truth of their relationship is revealed, both still continue to refer to him as Grandpa. He was also close to Emperor Rudolf as he was the sole individual in the entire kingdom and the world who knew of his son's existence. Rudolf placed great trust in Mycen to not only be aware of his grand plans for his son, but also send him away with Mycen to raise and train to carry out his plans.

In Chapter 4, talk to him at Rigel Castle (needed to progress).

Mycen is a slightly above average unit, and he can be used to replace characters who have turned out badly or died. He is the last character recruited in Alm's route, arriving just in time for the final dungeon. His starting stats are okay. He has impressive HP, Strength, and Defense. While his Resistance may seem low, the fact that said statistic does not increase in the game and that only magic units and Kliff can compare with it makes him an excellent mage killer. His Skill is average. His Speed is low, and his Luck is the worst in the game. His growth rates are almost non-existent, so he is unlikely to improve much even if you try to level him. The main reason he is viable is that he is quite strong and durable, so even with his lackluster Speed, he should be able to handle fighting late game melee units.

Because he is a Lance user, he can use Sol, Luna and Astra, three powerful spears. With one equipped, he can do some pretty hefty damage. However, the drop rate for these weapons are extremely low and grinding to find these weapons are tedious and time-consuming, making this strategy unreliable. Overall, he is a good unit, and actually can hold his own pretty well in the final dungeon.

Mycen comes with decent starting stats for the point he joins in, making him a serviceable mounted unit for the last dungeon before the credits roll. His base stats are good enough to contribute, but don't expect him to annihilate maps like other Gotohs can. Speed is his main problem, as he gets doubled by most enemies. His durability is good, with high HP, defense, and even resistance, so he doesn't suffer from that as much as other units. As long as the player is reasonably careful and checks which enemies can double attack him, Mycen can help out a lot in the final dungeon, especially if they have lost a lot of units.

However, his atrocious growth rates leave him with little to no potential to improve, which makes him a borderline unusable unit for the postgame content. If you insist on using him after the final battle, pitchforking is always an option, but isn't optimal; he has no future as a Mage given his awful spellpool, and will take several cycles through the mercenary line in order to max stats due to his low growth rates even with the Star Jacinth.

"Serves as the prime minister in the newly established government of Valentia."
"As King Alm I's excellent right-hand man, he threw all his effort into the kingdom's reconstruction."

As the One Kingdom's new chancellor—and right-hand man to King Alm I—good Sir Mycen worked tirelessly toward the kingdom's restoration. Despite his formal standing and title, the king and queen continued to love him like a grandfather.

“Alm, Celica. Surpass me. For the sake of Valentia...”
—Mycen's death quote in Gaiden

Mycen is illustrated in the trading card game Fire Emblem Cipher with the following cards: 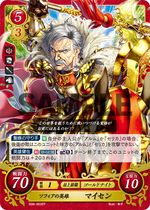 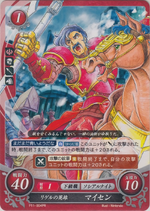