"Myrmidon" redirects here. For the class from Gaiden and its remake, see here.

The Myrmidon (剣士, Kenshi, Sword Fighter in the Japanese versions) is a classic combat physical class that recurrently appears across the Fire Emblem Series. Wielding Swords as their sole weapon of choice, the Myrmidon class is distinguished from the similar Mercenary class, but closely linked to it in terms of origins and promotion paths.

Navarre, originally a Mercenary in the original game and Mystery of the Emblem, is credited for creating the archetype of Myrmidons, with the class's basic appearance and statistic traits derived from him. Navarre is eventually befittingly made a Myrmidon in the remakes of the original two titles.

The Myrmidon class, originally known as the Sword Fighter (ソードファイター, Sōdo Faitā) class, is introduced to the series in Genealogy of the Holy War, where it replaces the Mercenary as the primary Sword wielding foot unit. The class is able to promote into two different classes depending on the character; Ayra and Larcei promote into Swordmaster, while Chulainn, Ulster, Creidne and Dalvin promote into Forrest, the equivalent to the Mercenary's traditional Hero promotion.

In Thracia 776, the Sword Fighter class functions in much the same way as its predecessor, where some characters promote into Swordmaster and others promote into Mercenary, another Hero equivalent.

Serendipitously, in both TearRing Saga: Utna Heroes Saga and Fire Emblem: The Binding Blade, the class is formally separated from the Mercenary class and the Swordmaster class is instituted as the sole promoted form of the Myrmidon class.

In The Sacred Stones, Myrmidons are given the further option to promote into the Assassin class alongside the Swordmaster class.

The Myrmidon class is simply known as Blade ( Bureido) in the Japanese version of Radiant Dawn. Like its predecessors, the class promotes directly into the Swordmaster class, which in turn promotes into the Trueblade class when the necessary requirements are fulfilled.

In Shadow Dragon and New Mystery of the Emblem, remakes of the Archanea Series, some characters who were originally Mercenaries are reinstated as Myrmidons, including the likes of Navarre and Radd.

In Awakening, the class is again given the further option to promote into the Assassin class alongside the Swordmaster class.

The class has been renamed Samurai (侍) in Fates and is treated as a Hoshidan class. The Samurai has the option to promote into the Master of Arms alongside the traditional Swordmaster. The Samurai class is regarded as the counterpart to the Nohrian Mercenary.

The class appears again in Fire Emblem Warriors, where it is the base class of Owain. It's Hoshidan counterpart, the Samurai, also appears as an enemy-only class.

In Fire Emblem: Three Houses, the Myrmidon serves as an optional promoted class of the Commoner or Noble class if the unit passes the Certification Exam at Lv. 5 with a Sword Skill Level of D or higher and a Beginner Seal.

In Vestaria Saga I, the Myrmidon is once again known as the Swordfighter. The class wields both Swords and Greatswords. The class comes with the Critical Edge skill which increases their crit rate based on their Skill.

The Myrmidon's superior Speed and Skill over other similar classes make them very formidable foot soldiers, but their comparatively lower HP, Strength and Defense make them difficult to protect against quick and accurate opponents.

While Myrmidons can easily deal with magic users and thieves with a single round of combat on the player phase, the same prowess may not necessarily be replicated on the enemy phase; when overwhelmed by too many of such enemies, they could potentially lose their superior edge and be felled. When facing heavier enemies, especially fighter-type units, the high Speed boasted by Myrmidons makes them proficient at evading clumsy blows. This is, however, offset by their typically mediocre Strength, especially when they are commanded to do battle with heavily armored units (exacerbated further if said armored units are immune to their damage).

Should a Myrmidon be attacked by slower units, especially a Fighter or Brigand, they are often able to kill or heavily damage their enemy in a single counterattack due to the consistency that they display in inflicting critical attacks.

Most female Myrmidons are depicted donning a tunic with an over-top that barely covers their waist and long, high boots with no leggings. Males, conversely, are depicted in a tunic and leggings with a belt and sheath (sometimes on their back) for their sword.

In titles where members of this class are outfitted with armour, they are usually restricted to extremely light breastplates or gorgets, a cloth headband (with a small steel plate covering their forehead in Awakening and Fates,) and sometimes small pauldrons depending on the game to indicate their lack of Defence.

In Fates, Samurai come better equipped, as they wear much sturdier chest plates and gorgets that resemble standing steel collars with various cultural clothing items worn underneath. Samurai are still considered to be under-equipped as compared to traditional Samurai, but this is changed the moment they promote into Swordmasters, where they are properly outfitted in a whole suit of Samurai armor.

In Three Houses, Myrmidons wear tunics that are brown, grey and the color of the house they represent. The exceptions are Byleth who wears a black and grey tunic with a pink outline, Dedue whose tunic consists of mostly neutral colors and Mercedes, whose tunic color scheme is a light shade of grey, brown and red. The female uniform has one pauldron instead of two and knee-high boots, though the outfit does have gauntlets, knee-pads ,and a belt and sheath.

The Myrmidons were a tribe that followed Achilles and were renowned for the battle skills and loyalty to their leader. In modern times, a Myrmidon is someone who follows a cause without question. Many members of the class (Such as Guy, Lon'qu, and Mia) could be called Myrmidons in this respect in relation to their devotion to swordplay. In modern fantasy, a Myrmidon is usually a swordsman, focusing on speed, wielding a sword in a single hand, while leaving the other free.

Concept artwork of the Sword Fighter class from Genealogy of the Holy War. 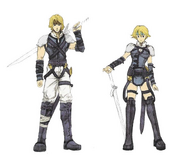 Concept artwork of the Myrmidon class from Path of Radiance.

Concept artwork of the Myrmidon class from Radiant Dawn.

Concept artwork of the male variant of the Myrmidon class from Awakening.

Concept artwork of the female variant of the Myrmidon class from Awakening.

Concept art of a female Samurai (no hat) from Fates

Concept art of a female Samurai (with hat) from Fates 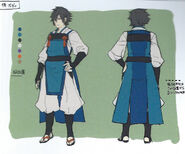 Concept art of a male Samurai (no hat) from Fates 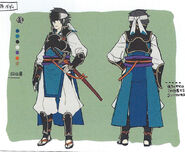 Concept art of a male Samurai (with hat) from Fates

A Level 1 generic Sword Fighter, as he appears in the first series of the TCG.

Generic CG portrait of the Sword Fighter class from Genealogy of the Holy War.

Generic CG portrait of the Myrmidon class from the GBA titles.

Generic portrait of a Swordfighter from Berwick Saga.

Generic portrait of a Swordfighter from Berwick Saga.

Generic CG portrait of the Myrmidon class from the DS titles.

Generic portrait of a Myrmidon from Awakening.

Battle model of Chulainn, a male Sword Fighter from Genealogy of the Holy War.

Battle model of Ayra, a female Sword Fighter from Genealogy of the Holy War.

Battle model of Shiva, a male Sword Fighter from Thracia 776.

Battle model of Machyua, a female Sword Fighter from Thracia 776.

Animation of Rutger, a Myrmidon from The Binding Blade, showcasing both a normal and a critical attack. 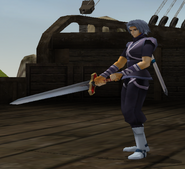 Battle model of Zihark, a male Myrmidon from Path of Radiance.

Battle model of Mia, a female Myrmidon from Path of Radiance. 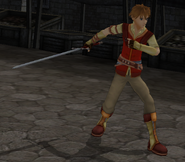 Battle model of Edward, a Myrmidon from Radiant Dawn. 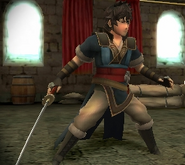 Battle model of Lon'qu, a male Myrmidon from Awakening.

Battle model of Say'ri, a female Myrmidon from Awakening.

Battle model of Hinata, a male Samurai from Fates.

Battle model of Hana, a female Samurai from Fates. 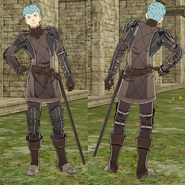 Generic class portrait of a Samurai from Fates.

Map sprite of a male Sword Fighter from Genealogy of the Holy War.

Map sprite of a female Sword Fighter from Genealogy of the Holy War.

Map sprite of a male Myrmidon in Thracia 776.

Map sprite of a female Myrmidon in Thracia 776.

Map sprite of a male Sword Fighter from TearRing Saga.

Map sprite of a female the Sword Fighter from TearRing Saga.

Map sprite of a male Myrmidon from the GBA titles.

Map sprite of a female Myrmidon from the GBA titles.

Map sprite of a male Myrmidon from Shadow Dragon.

Map sprite of a male Myrmidon from Shin Monsho no Nazo.

Map sprite of a female Myrmidon from Shin Monsho no Nazo.

Map sprite of a male Myrmidon from Awakening.