Erica Lindbeck
[view]
“... My father has dedicated his life to protecting humans. For the longest time, I could not fathom why he would do this. But now, after spending time with all of you... I begin to understand how he felt.”
—Myrrh talking to Saleh in a support conversation

Myrrh is a playable character from Fire Emblem: The Sacred Stones. She is the adopted daughter of Morva who lives with him in the Darkling Woods after her true parents were killed in the last great war. In Caer Pelyn, she is known as the Great Dragon. She acts as a companion to Ephraim, whom she addresses as "Brother" in their supports. Her support with Dozla reveals her age to be roughly 1200 years old.

Myrrh appears as a Sticker in Super Smash Bros. Brawl.

Myrrh first appears when Eirika and Ephraim reunite in Frelia after Chapter 8. Ephraim states that he found Myrrh in captivity within Grado territory. She reveals that she sensed a great evil coming from Grado and traveled there, but she ended up being captured and losing her dragonstone.

During Eirika's route, the Caer Pelyn elder, Dara, reveals that Myrrh is actually the Great Dragon from the legends who saved Magvel from the Demon King. Regardless of the route chosen by the player, she accompanies Ephraim on his quest, although she does not enter any battles before the twins' reunion. During Ephraim's route, she runs away from his group once they arrive at Taizel after their ship journey, with her reason being that she senses her dragonstone. She is eventually captured by Selena, whom she attempts to convince that Grado's cause is unjust. However, Selena refuses to believe her words and releases her. Before Ephraim's army begins clashing with Selena, Myrrh rejoins her former companions. After the battle, she obtains her dragonstone, although she is saddened by Selena's death.

Before the battle to retake Renais Castle begins, Myrrh decides to join Ephraim and Eirika on the battlefield. In Chapter 20, she hopes to reunite with Morva when the army arrives at the Darkling Woods. However, Morva is forcibly transformed into a Draco Zombie by Lyon. After her father is slain by the twins' army, she cries over his death, but continues to fight against the Demon King and his minions.

Myrrh is a shy and humble girl who is often lonely. Much of her dialogue is expressing concern for whomever she is speaking to, and she rarely talks otherwise. While she seems to prefer solitude, she actually longs for close companions.

Myrrh, like most Manaketes, is a useful character, capable of killing most enemies with ease. Her Dragonstone does effective damage to monsters (means the Dragonstones might of 16 will be tripled), making her useful against Draco Zombies and other creatures.

While her initial stats may appear incredibly low for her late jointime, the Dragonstone increases them enough to let her easily compete with your promoted units considering defensive stats, hitrates and raw damage output, with her low base speed and HP remaining her only big weakness. This results in her most likely having trouble to double enemies for quite some time or taking fights with enemies who wield weapons which are effective against Myrrh or the Luna tome which ignores her high resistance and will target her low HP-pool instead. Aside from that, her high EXP-gain combined with her high growths in strength and defense will quickly allow her to kill most less durable enemies with a single blow without taking damage herself.

Unfortunately, she is greatly weakened by the fact that she can only attack 50 times ever, and the Dragonstone cannot be repaired by the Hammerne staff, so the player should try to save her for important battles. If players wish to "repair" the Dragonstone, one can simply use the enemy control glitch.

A useful training technique is to have her go through the Tower of Valni and kill nothing but Entombeds, or destroy Gorgon Eggs in Neleras Peak. This yields a good amount of experience with minimal effort.

Something to take note of however is Myrrh is treated as a flying unit in The Sacred Stones. She may cross over terrain with no movement penalty, but is also susceptible to taking effective damage from enemy bowmen like Sniper and Bonewalker/Wight archers. But given her high defensive growths, this should prove less of a problem later on. She could alternatively be given the Fili Shield to negate this weakness, entirely.

Great Dragon
A manakete who is much older than her appearance suggests. She's shy but oddly attached to Ephraim. Appears in Fire Emblem: The Sacred Stones.

Spooky Monster
A manakete who is much older than her appearance suggests. She'd like some candy but is a little shy about asking for it. Appears in Fire Emblem: The Sacred Stones.

“I'll do what I can.”
—Final Chapter Quote in The Sacred Stones

Myrrh, the Great Dragon (無垢なる竜人 Mukunaru ryū-jin)
"After bidding her farewells to Ephraim, she returned to Darkling Woods. She lived a long and full life, served by the people of Caer Pelyn and comforted by the memories of her dear friends."

A Support with Saleh
"Myrrh returned to Darkling Woods, but at Saleh's request, she eventually moved to Caer Pelyn, In time, the townsfolk learned to treat her not as the Great Dragon but rather as a normal girl, and she was happy."

A Support with Ephraim
"After the war, Ephraim returned to Renais and Myrrh to Darkling Woods. They both turned their attention to their respective duties but never forgot one another. Though Myrrh never again left Darkling Woods, Ephraim often visited her."

It is possible to have Myrrh use a monster's weapon (such as a Revenant's claw, a Bael's talon, a Mauthe Doog's fang, etc.) via the Enemy Control Glitch. Acquiring a Draco Zombie's weapon, Wretched Air, in this manner will result in the stat enhancements of the weapon being activated. Also, if the Demon Light and Ravager weapons are taken from Fomortiis via the Enemy Control Glitch, Myrrh can use them, but Nightmare can only be used by Fomortiis.

You can also restore her Dragonstone in this manner. See more details on this page.

Myrrh is illustrated in the trading card game Fire Emblem Cipher with the following cards: 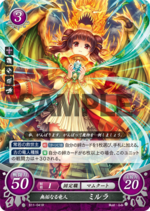 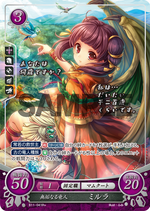 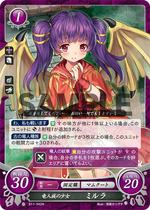 'Myrrh' possibly takes her name from the reddish-brown resinous material collected from the dried sap of certain trees, which can be related to her origins from Darkling Woods. The name is derived from the Greek myth of Myrrha, the mother of Adonis who was turned into a tree by the gods as punishment for seducing her father.