The Mystletainn (ミストルティン Misutorutin lit. Mistilteinn; romanized as Mistolteen in Fire Emblem Treasure; translated as Mistoltin, and Mistletain in certain fan translations) sword is one of twelve holy weapons from Fire Emblem: Genealogy of the Holy War, and is the blade that was once wielded by Crusader Hoðr, bestowed upon him during the Miracle of Dahna.

Mystletainn is unusual among holy weapons for not belonging to the royal family of it's country's founder. The reason for this is the full mark of Hoðr, only showed up on his youngest daughter rather than her siblings in the Agustria's royal house, and only after she had married into the Nordion dukedom. As such a system was set up where the Nordion house would keep the Mystletainn so long as they took a vow to protect the royal family.

For most of its history, Mystletainn was used by loyal knights in service of the minor blooded royal family, though a later tragedy would lead to the extinction of the royal family. The Blade is called the Demon Sword, though the reason for such a name is unknown.

In Genealogy of the Holy War, only individuals in possession of major Hoðr holy blood are able to wield the blade, with the only two characters fulfilling this requirement being Eldigan and Ares.

In Genealogy of the Holy War, the Mystletainn makes its first appearance in Chapter 1, where Eldigan uses the blade as he and his Cross Knights guard Nordion Castle and oversee the Verdane-Agustrian border on Sigurd's behalf. The blade appears again in Chapter 3, where Eldigan is forced to wield it against Sigurd under the command of Chagall. After being persuaded by his half-sister Lachesis, Eldigan leaves the battlefield and meets his demise at the hands of the king he has pledged loyalty to.

The Mystletainn later appears in Chapter 7, where it is revealed to have been inherited by Eldigan's son Ares, who is stationed at Darna with Lene/Laylea and working under Jabarro's mercenary band. Despite the paternal role that Jabarro had for him following the fall of House Nordion and the death of his mother, Ares turns against him after learning of his support for Bramsel's advances on Lene/Laylea. Using the Mystletainn, Ares successfully rescues Lene/Laylea and later joins Seliph's army after learning of the bond shared by their parents.

In the events of Awakening, Owain, while embarking on a quest to locate the Mystletainn blade of yore, chances upon the "Missiletainn" instead. Unaware that the Missiletainn is but a poor replica of the one he seeks, Owain takes it into his possession and proclaims it as his own.

The name "Mystletainn" most likely establishes its roots from the sword that Höðr employed in order to kill Baldr. According to the 13th-century text Prose Edda, as a result of the devious schemes concocted by Loki, the god Baldr was slain by the hand of his brother, the blind god Höðr, by means of a mistletoe projectile. This mortifying act took place in spite of the vain attempts of Baldr's mother, the goddess Frigg, to beseech all living things and inanimate objects alike to swear an oath, one in which they pledge to not rein harm upon Baldr after he experienced terrifying nightmares of his death. Frigg was, on the whole, able to convince one and all to observe the oath, save for the mistletoe, by virtue of oversight on her part, where she perceived it as being "too young" to demand a pact from.

In the Gesta Danorum version of the tale, Baldr and Höðr were instead portrayed as rival suitors, with Höðr killing Baldr with a sword named Mistilteinn (Old Norse "mistletoe").

To further add on to the existence of the Mystletainn blade in lore, a sword by the same name also manifests within various other Norse legends.

The Mystletainn as it appears in the third series of the TCG.

Official artwork of the Mystletainn from Fire Emblem Museum.

Ares wielding the Mystletainn in Genealogy of the Holy War.

Ares wielding the Mystletainn in Awakening. 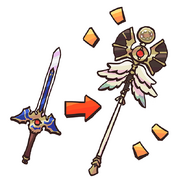