Naberius (ベルレス Belreth, Belrez in the Japanese version) is an enemy character in Fire Emblem Gaiden and its remake. He is a member of the Duma Faithful.

Naberius is usually depicted as a three headed demon with a raucous voice but depicts himself as eloquent and amiable. He teaches the art of gracious living and makes men cunning in all arts.

It's unknown if he's associated with Cerberus though some consider them both the same being. 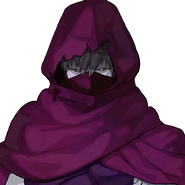