Chapter 13: A Guiding Wind [fought in Chapter 19: Entrusted and recruited in Endgame: Repatriation] (Path of Radiance)

Naesala is a playable character and an anti-hero inFire Emblem: Path of Radiance and Fire Emblem: Radiant Dawn. He is the King of Kilvas, and is extremely devoted to the welfare of his nation, as well as the surviving members of the devastated Heron clan.

Naesala is first seen assisting several Daein troops in raiding a Begnion ship. It is revealed that his main goal is to attain treasure from the ensuing skirmish, as he betrays his supposed allies and sends his men in to loot their vessel. Naesala later attends a meeting of the Laguz Kings, where his values and intentions are questioned by the other royals.

Naesala then betrays Reyson by selling him to Duke Tanas. While it is later revealed that Naesala initially plans to rescue Reyson after gaining the trust of Duke Tanas, his plan is ruined when Reyson manages to escape from Duke Tanas' grasp.

In Chapter 19 of the game, Naesala personally makes an appearance on the battlefield to fight Ike's troops. After speaking to either Janaff or Ulki, he learns that Reyson has joined Ike's army and that Leanne has been found alive. Naesala then abandons his fight against Ike's forces, thereafter personally approaching Reyson to seek his forgiveness.

Naesala appears in Chapter 28, where he disguises himself as a Daein soldier and rescues Leanne from Gritnea Tower. He then begrudgingly aids Ike's forces in laying siege on Castle Crimea after Nealuchi reminds him that Reyson and Leanne are counting on him to protect them.

In this game, Naesala appears to have rebuilt his friendships with Reyson and Leanne, though his scheming personality and tendency to place his own country’s interests before others' have remained unchanged since the Mad King’s War, and he continues to plunder Begnion’s merchant ships.

After the formation of the Laguz Alliance, Tibarn leads his fellow hawks to attack Begnion supply convoys in order to disrupt the Begnion army from the sky, but Naesala tricks Tibarn and the Phoenicis army into attacking the Begnion Central Army instead of its supply convoy. This turns out to be a diversion to keep the king away from his country of Phoenicis, allowing the Begnion army to lay siege on the undefended country and massacre its civilians. This betrayal earns Naesala great resentment from Tibarn and all the other laguz.

However, it is later revealed that these actions were not Naesala’s true intentions, and that he was forced to do them under the Blood Pact he was unwillingly bound to. The pact compels any king of Kilvas to obey the Senate’s will, or place their own countrymen in mortal peril. The first king of Kilvas had signed the pact with the Begnion Senate in order to restore his country, and it had been passed down through succession.

Later, Naesala learns that the contract’s owner was not the Begnion Senate specifically, but rather the Empire of Begnion as a whole. By deciding to obey Empress Sanaki instead, who outranks Lekain, he is able to temporarily hold off the threat of the pact being broken, allowing him to free his countrymen from the reins of the Senate.

After the goddess Ashera casts her judgment upon the continent, Naesala makes haste for the Tower of Guidance in Skrimir's group. Prior to the beginning of Chapter 4-P, Skrimir, blinded by rage against Naesala for his betrayal of the Laguz Alliance, makes to rip him apart. Leanne and Nealuchi step between the two to protect Naesala, forcing him to take action and lift them up into the air, out of Skrimir's reach.

If Naesala is brought into the Tower of Guidance, he takes the opportunity to personally destroy the Blood Pact that binds him to Begnion's will.

After the events of the game conclude, Naesala abdicates his rule of the Raven clan, choosing to work as a diplomat for Tellius instead. If he shares an A rank Support with Leanne, the pair will wed in the epilogue, bearing two children, a Heron girl and a Raven boy.

Throughout the events of both games, Naesala is portrayed as a cold, uncaring and narcissistic individual, evasive of ties to any of the other laguz clans, save for the Herons. Despite this, however, he is extremely devoted to Kilvas, going so far as to commit constant acts of skulduggery against those who trust him, for the sake of protecting his people and preserving his country. Ironically enough, this has caused Naesala to be commonly accepted as a strong leader and a good king by many of his peers, including the Apostle Sanaki herself.

Naesala later adopts a more self-deprecating attitude in Radiant Dawn, constantly describing himself as cowardly and unworthy of praise, despite his good intentions, tendency toward self-sacrifice for his country, and truly being a good person at heart. This can be observed in a conversation he shares with Dheginsea when he engages him in battle, in which he remarks that he is better at running away than standing his ground.

Naesala will join in the final battle if the player chooses to summon him instead of either Tibarn or Giffca.

Of the three laguz chosen in the final chapter, Naesala is considered the worst out of them, having considerably less power than both Tibarn and Giffca. However, Naesala has a number of perks that distinguish him from the other two, despite sacrificing a noticeable amount of power for them. First, he has blistering speed, allowing him to outspeed nearly every enemy in the final chapter. He complements this with Vantage, supplementing his high avoid by also allowing him to strike first in combat, even during the enemy phase. However, Naesala's strength problems are still a major issue, especially on Hard Mode, when Ashnard is fought a second time with higher stats. Tibarn and Giffca hit significantly harder than Naesala, which is readily apparent when fighting high-defense enemies such as enemy Laguz Dragons and Ashnard himself (especially on Hard Mode). On hard mode, where Ashnard will likely be one of the only enemies left on the map when the player makes their choice, there is virtually no reason to choose Naesala over the other two.

In this game, like other Royal Laguz, Naesala is one of the most powerful playable Laguz characters. He is able to cap his Strength, Skill and Speed with relative ease, and occasionally his Defense and Resistance as well. As the mastery skill Tear operates on the workings of the Speed stat, Naesala is able to activate it fairly frequently, giving him the opportunity to ravage enemies on the battlefield.

Naesala joins only with an S-rank in Strike, which gives him five more points of might than if it were an A-rank strike but five fewer points than if he had an SS-rank. Given Naesala's high HP and avoid, as well as his access to Formshift, he can grind weapon experience rather quickly to reach SS-rank and possibly reach it or come close to it before the endgame, the drawback being that other characters will miss out on any experience he gains. Unlike other Laguz royals, however, Naesala usually receives more than one experience point from killing enemies, meaning he can potentially level up several times on the way SS-rank in Strike as he usually one-rounds all but the most durable of enemies.

Sky's Shadow
King of Kilvas and leader of the raven clan. He uses his cunning as a weapon and won't shy away from dirtying his hands. Appears in Fire Emblem: Radiant Dawn.

Sea's Shadow
King of Kilvas and leader of the raven clan. Hired to join in the pirate-related festivities. Appears in Fire Emblem: Radiant Dawn.

“Oof! Poor judgment abounds--on my part as well. Perhaps I'm not suited for charitable actions such as these. Well then, I'll take my leave...”
—Naesala's retreat quote
“N-no... This cannot be... Is this...my...fate? What of Kilvas-- (death animation happens, but he revives) Guaa... I was careless... and you're better than expected. To me, my brethren! We leave at once!”
—Naesala's defeat quote in Chapter 19

“Waugh...! I guess I won't see the end of this. Battles without rewards just aren't my thing. It's time for me to retreat~”
—Naesala's retreat quote

Naesala: Ah, this is... what some would call...a just reward...
Skrimir: Raven King! Open your beady eyes! Do you hear me, you winged jackal? You'll not die here. I have sworn to rip you limb from limb myself! Do you hear me?
Naesala: Quit your bellowing, you lice-ridden hairball. You're going to burst my delicate...eardrums...

Saved from the blood pact, Naesala left his people and their nation. He became a diplomat, finding atonement in work.

Leanne was united with Naesala, whom she had always loved. Together they raised a heron girl and a raven boy.

Naesala is illustrated in the trading card game Fire Emblem Cipher with the following cards: 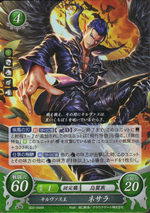 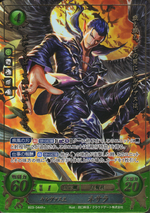 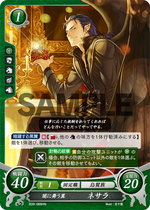 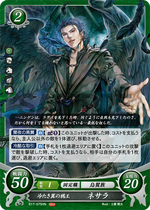