Chapter 22: The Dragon's Table (New Mystery of the Emblem)

Colleen O'Shaughnessey
[view]
“Take me with you. I must...finish what I started...I think. I must fight with you.”
—Nagi in Shadow Dragon

Nagi is a female Manakete and is one of the exclusive characters in Fire Emblem: Shadow Dragon and Fire Emblem: New Mystery of the Emblem.

Before Marth and his forces take on Medeus, Gotoh sends them to a tower in another world telling them to seek the aid of the tower's master. After passing the trials within, Marth's soul cries out to Nagi, waking her from her slumber. Although she can only remember her own name and has vague familiarity when Marth mentions Gotoh, she feels that she must join Marth in his battle against Medeus and presents him with another Falchion. If she faces Medeus in battle, he will note that he was not the only dragon revived and that she had recovered even less power than he had. In the end, Nagi disappears after the final battle, even before Marth could thank her for her help.

To reach the chapter that visits the tower, Tiki must be slain and the Falchion must be lost. When Nagi joins, she gives Marth a weaker version of the Falchion.

Nagi reappears at The Dragon's Table in Fire Emblem: New Mystery of the Emblem, although Marth does not recognize her, only feeling slight familiarity.

Her appearance being similar to Tiki's, her possession of the Falchion, her familiarity with Gotoh's name, and her desire to stop Medeus imply that she is either Naga or her reincarnation. This is more apparent in the Japanese version, where her ending title is "Divine Dragon King's Incarnation" ("Holy Avatar" in the English version) and the event in which she first appears is labelled as "Revived Divine Dragon King" ("Deity Reborn" in the English version) in the Event Recap. Also her codename in both the game data and in the official site is "Naga". Her appearance also heavily resembles that of Naga's in Awakening. The only problem with this theory is that Nagi does not have any conversations with Tiki, but Nagi and Tiki are canonically not supposed to exist at the same time, although players can use the Aum Staff to revive Tiki after recruiting Nagi. However not every related pair of characters have conversations.

Another theory is that she is an alternate form of Tiki. After Tiki dies, Gotoh remarks that she is simply sleeping, and Nagi, who just awoke from a sleep, could be Tiki from the future. The similar structure of the Alterspire and the Fane of Raman could be because they are the same place in different timelines. Due to Tiki and Nagi's similar appearance, this theory is fairly popular, despite Tiki not having a direct connection to Medeus or the Falchion and a lack of in-game evidence towards it. Gotoh's comment could just as well be a reference to the sequel where Tiki returns to her sleep. Medeus's battle conversation with Nagi also seems to disprove this theory, since he claims to be familiar with Nagi, but Tiki was born after Medeus was defeated by Naga.

Complete Chapter 24x, which can only be reached if you do not have the Falchion and Tiki is dead. She replaces Gotoh as a playable character in the final chapter if she joins.

Fittingly for Tiki's replacement and possible future self, Nagi is, for all intents and purposes, a pre-trained version of Tiki, with her base stats being fairly close to Tiki's level 15 averages (except Luck). Barring some tricky use of the Aum Staff, upon her recruitment, she is the player's only possible choice to wield the Divinestone, and by extension, one of only two who can deal effective damage to Medeus (and given how subpar Marth is and that his death risks a game-over, she can be considered the only one). Even on Merciless Mode, Nagi takes off most of Medeus's health; she will not survive a counterattack from him, but this can be solved by using the Aum Staff to bring her back and Warp to return her to combat. Her raw power with the Divinestone also means she can take on standard Manaketes effectively, though she fares much worse against human foes.

Comparing Nagi to Gotoh is a difficult question, as the two have essentially opposite roles in gameplay; Gotoh is a supportive character who can aid the player with reaching Medeus but struggles in combat, while Nagi is a purely combative character who excels against a single dominating boss but relies on staff support to reach her potential. If the player lacks Tiki, then Nagi becomes imperative to use, but if the player is considering whether to kill Tiki off simply to obtain Nagi, then there is little reason to care about the difference, as it is fundamentally very small. It can still be worth it if the player has not trained Tiki and has sufficient staff-users to not need to bother with Gotoh, as a base-level Tiki's hit rate on Medeus will be fairly shaky.

Joins automatically at the beginning of chapter 22.

Dragon Avatar
A manakete who slept within the Alterspire. Her appearance is reminiscent of Tiki's, and she wields the Divinestone. Appears in Fire Emblem: New Mystery of the Emblem.

Holy Avatar
Marth would have thanked Nagi after Medeus fell, but there was no one there to thank. Had she returned home? None ever knew.

Dragon King's Avatar
After the war, Nagi vanished as suddenly as she appeared. History holds no records of her ever appearing again.

Nagi is illustrated in the trading card game Fire Emblem Cipher with the following cards: 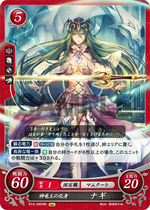