Eden Riegel
[view]
“No, I... I have to be strong. Everyone expects me to. I can turn into a dragon, you know? So I have to put on a brave face and protect everyone, just like you do.”
—Nah talking to her mother, Nowi, after her recruitment.

Nah is a playable character in Fire Emblem Awakening. She is the future daughter of Nowi.

Nah was born as a half-breed Manakete and is proud of her Manakete heritage. Nah is a unique Manakete, unlike Nowi and Tiki (and potentially Morgan), as Nah's transformed skintone is a unique shade of pink rather than the standard yellow-green. Nah was too young to remember her mother, Nowi, and her father as they had died in battle. Nah was given Nowi's wedding ring, which she always wears. Orphaned, Nah was sent to a family of one of her father's army friends. However, the family was unkind to Nah because of her hybrid status. Nah did her best to appease her new family by doing chores before being asked and defending their household from Risen at night. Despite all this, not one of her foster family was ever grateful nor did they ever acknowledge her. Nah lived feeling alone and unwanted, only wishing for her parents to return home. Eventually she joined Lucina and the rest of the children to return to the past to prevent the ruinous future.

In her Paralogue, Nah is lost in the Manor of Lost Souls and Risen soldiers have swarmed the manor. Luckily, Chrom's army is nearby with her mother, Nowi, who manages to find her. Nowi is ecstatic to meet another Manakete, though is confused with Nah's name. Nevertheless Nah joins Chrom's army after they leave the Manor. With nowhere to go, Nah offers to stay with Chrom's army, which Chrom happily accepts. Nah asks Nowi if she recognizes the ring on her finger. Nowi notices that it's the exact same ring as her ring from her husband. Nah explains that it is the exact same one which she got after Nowi died in the future. Nowi senses that Nah is fighting back tears, but Nah tells her since she is a Manakete, she must maintain a strong appearance. Nowi tells her it is okay since she cries a lot herself. Nah finally cries, happy to be reunited with her mother.

After the war, Nah would spend the rest of her long, Manakete life educating humans about Grima.

In an alternate timeline, Nah, alongside Cynthia, Noire, and Kjelle go off on a secret mission to recover the missing Gemstones for the Fire Emblem. The team is able to recover two of them, but are ambushed by Risen soldiers as they are resting. Separated from each other and surrounded, the four accept their fate.

However, forces from another world appear, comprised of alternative versions of their parents in their prime. Among their forces are Nowi and Nah's father, who defeats the ambush and even takes time to encourage Nah to keep pushing forward.

After the battle, the warriors have left, leaving the girls to wonder who sent them to their aid as they quickly make their way back to Ylisstol. At the climax of the battle against Grima, the twelve children are reunited with all five gemstones in hand, granting Lucina the power to slay the Fell Dragon.

Peace is restored to the realm and the world has begun recovering from the Fell Dragon's rampage. Over the course of six months, many of the survivors have begun coming to Nah, hailing her as a Manakete scion. She has begrudgingly become the new Voice of Naga as a result.

In her support with her father, she wonders why he married her mother since she acts so childishly and looks childish despite her true age. When he refuses to tell, she accepts it as another disappointment. When her father asks about this disappointment, Nah tells her father about her life with her foster parents. Touched by her story, her father agrees to tell her whatever she wants to know about her mother and his relationship while promising to never let her feel alone again.

In Nah's support with Tiki, Nah learns an important lesson from Tiki about the "curse" that Manaketes have. Nah learns and accepts that, because of her Manakete blood, Nah will outlive many of the important people in her life, including her father. Nah forges a friendship with Tiki so that she'll have at least one manakete friend who will live a longer life like she will. During Nah's support with Female Morgan, Nah tries to learn blade catching to stop her only weakness, Wyrmslayers. After mastering the art, they soon realized that her arms are too short in her Manakete form, but they both continue to search for a good method to stop Wyrmslayers. In her supports with Male Morgan, it is revealed that she often prays to Naga, though at most times her prayers go unanswered.

In contrast to her mother, Nah tries to be mature for her age and is accustomed to controlling her emotions. This is due in part to her upbringing of neglect by her foster family as they did not give Nah the emotional or familial support she desired after the loss of her parents. Her desperation to gain their attention and affection lead to a desire to prove her worthiness so she would not be cast aside again in the present timeline.

She is proud of her Manakete heritage and is eager to learn all she can about the Manakete way of life once she arrived in the present timeline. She has inherited much of the Manakete physical traits and has stated that she occasionally has feral urges which she unleashes from time to time in a secluded forest to prevent her allies from being caught during her rampages. She strikes up a friendship with Tiki, but has come to terms with the fate of all Manaketes and their relationship with humans, namely that she will vastly outlive most of her comrades. She does vow to make the most of the time she has with her human friends and especially her father.

Her bond with her mother in particular, the source of her Manakete heritage, is a somewhat strained one as Nowi's carefree nature clashes with her serious one. However, she later learns after spending time with her that Nowi's playtime between battles is simply a method for her to train and Nah begins to respect her more, taking Nowi's suggestions more to heart.

Despite her outward appearance of maturity, she still has moments of childishness and is essentially still a child in Manakete years. She can be somewhat possessive of people, especially in the cases of her support with Inigo and Gerome. Nah openly questions her father's intentions to marry Nowi, but immediately drops the subject when they snap at her for being rude. She uses her Manakete form as a threat, declaring that she will devour whomever is disturbing her.

Nah also, to an extent, dislikes her unusual name and wishes that she had a much more normal one. She has the best teeth in the army.

Description: An enigmatic manakete who is unusually together for her age.

*Nah is able to inherit a skill that is unique to the Fighter and Barbarian class sets if Vaike is her father.

*Nah is able to inherit a skill that is unique to the Fighter class set if Gaius is her father.

*Nah is able to inherit a skill that is unique to the Fighter and Villager class sets if Donnel is her father.

*Nah is able to inherit a skill that is unique to the Barbarian class set if Gregor is her father.

*Nah is able to inherit a skill that is unique to the Barbarian class set if Henry is her father.

Nah - Little Miss
The manakete Nah still had many human lifetimes ahead, and she availed herself of this time to caution future generations away from the mistakes that led to the future return of Grima.

Nah and Robin
Many wrote of Robin's legendary exploits, but accounts of his origins and character varied. Scholars, poets, and bards agreed on one thing alone—he loved his wife, Nah, above all else.

Nah and Owain
Owain set off on a lengthy quest with Nah to "stay his sword hand." Nah got much eye-rolling practice during the journey, but she stayed by her husband's side nonetheless.

Nah and Inigo
Inigo traveled the world, every ready with a smile or a solution when trouble started to brew. Nah, the responsible one, ensured they were well packed and always had multiple maps at the ready.

Nah and Brady
Brady left the priesthood to become the world's scariest violinist. Nah, who considered herself quite the singer, often accompanied him; the sheer volume of her strains was said to flatten audiences.

Nah and Gerome
Gerome and Nah were married and settled down near Wyvern Valley. The wyverns bowed to their new dragonkin mistress, and the couple became the first true lords of the valley.

Nah and Morgan
Morgan's memory never returned, but he didn't seem to miss it much and lived happily with Nah. Later, scholars would speculate he had come from a different future than the other children.

Nah and Yarne
Yarne tried desperately to find a safe haven after the battles were done. While Nah endeavored to steer them clear of trouble, they soon realized the best place was Ylisse, where their journey began.

Nah and Laurent
Longing to meet his mother's intellectual standards, Laurent took Nah on an expedition around the world. Their curious nature led to many adventures, which they later put to paper in a rousing novel.

Nah is illustrated in the trading card game Fire Emblem Cipher with the following cards: 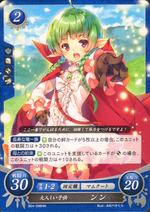 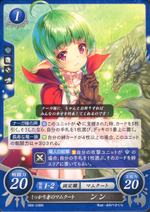 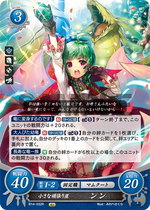 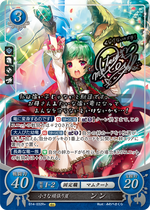 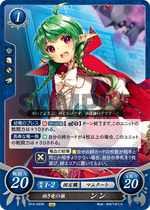 Nah is a colloquial way to say no, and is thematically similar to her mother's name "no way". It could also be based on the word gnaw referencing her having the best teeth.

In Japanese, ンン, pronounced nn, can be a way to say "huh?" or to answer a question in the negative, making it thematically similar to her mother's Japanese name "no no".