Rachel Robinson
[view]
“I am Nailah, Queen of Hatari, and this is Volug, my loyal servant. Our kingdom lies far east of here.”
—Nailah

Nailah is a playable character in Fire Emblem: Radiant Dawn. She is the ruler of the lost nation of Hatari, located to the east of Daein. She is a white wolf and through the skill Formshift has the ability to transform (and keep her wolf form) whenever she wants.

She first becomes playable in Part I, Chapter 8: Glory Unwanted and helps Micaiah along with Volug and Rafiel. She is required in that chapter. After the end of Part I, she goes with Tormod, Muarim, and Vika to Gallia.

After the last battle, she returned to Hatari with recent events graven in her heart; she hoped to migrate her people across the Desert of Death to Gallia under the personal behest of King Caineghis.

Nailah truly has the pride, air, and manners of a queen. She can be distant, serious, and blunt.

Despite this, however, she is very quick to form bonds with others, be they Laguz, Beorc, or even Branded, forming a lasting friendship with the elegant Heron Prince Rafiel and a fast friendship with Micaiah. She refuses to ever let Rafiel go anywhere alone and orders her trusted vassal, Volug, to pose as a 'pet dog' for Micaiah during and after their adventures together.

She puts great trust in her vassal Volug, though she can be quite blunt with him, likening him to a mere dog when he is in his unique "half-transformed" state.

She adores Rafiel as he is, and grows quite angry at Ike when he suggests that he be more like his brother Reyson and emulate the Hawk King Tibarn, a suggestion that Rafiel is certainly willing to try.

Nailah is the first Laguz Royal to be playable during Part 1 chapter 8. Her bases are insane for this early stage of the game and will still be competitive to your other units when she returns in Part 4. Combined with her Formshift ability which keeps her transformed, and the fact that beast Laguz barely get any movement penalties, she can trivialize most enemies on her joining map since she can easily reach them with her massive 9 base movement and dispose them within a single round of combat.

Another chapter where she can be very useful early on is 1-E, since if you give her the Pass ability, she can take out the thieves that are attempting to steal the treasure chests quickly, securing the loot for yourself. Keep in mind though that giving her a lot of kills during these two early chapters light-minded might result in considerable less experience to distribute to the members of the Dawn Brigade, who require a lot of investment to maintain usefulness later on. If you feel like you still need to feed some of those units kills in order to keep them viable, you can also make use of Nailah by rescuing weaker units or sniping strong enemies to make training them up a bit easier.

After rejoining your troops during Part 4 chapter 1, she'll continue being a strong unit, possessing high speed, excellent movement and decent attack thanks to her SS Strike rank, which suffices to let her deal with most enemies, including the Spirits during the endgame. As other beast Laguz, she is weak to Fire magic, but her good resistance and HP bases allows her to take a few magical attacks without risking her life nonetheless. During the final chapter, she can help taking down the Aurora with the help of Blood Tide, since she only requires a single additional point of speed in order to double them (though other of your units might do better against them than her).

Overall, aside her pretty poor availability, Nailah is a strong unit, possessing impressive bases as well as excellent movement.

Nailah is a fearsome unit who leads the Beast Unit pack as a Blue Infantry unit with a decent statline that is pushed to its maximum by a base kit that requires little outside assistance to help her excel in the growing Heroes meta. Her Atk is middling at neutral 45 but her Spd, sitting at 37 neutral is well-above average and her Physical bulk is decent. While unassuming or relatively unremarkable at first glance, Nailah is one of those units whose power comes from her weapon and tools at her immediate disposal.

Wolf Queen Fang has massive boost starting with special cooldown acceleration. It also grants her a boost in Atk/Spd based on the allies within two spaces of her x2, meaning that she can reach +10 in Aether Raids and +6 elsewhere to both stats, bringing them to incredibly lethal levels if her team coordinates around her. As a beast unit, she also maintains their quirk of transforming into beast forms at the start of the player's turn if they are either not adjacent to any ally OR adjacent only to other beast and dragon units. In her transformed state, she gains Atk+2 and also adds a Wo Dao effect, dealing an additional 10 damage when her special activates. Her weapon loves having a special charged as it drastically pushes her damage output and, while she can work functionally on any team, Nailah is able to fully exploit her weapon's full potential with proper allies on a beast/dragon centered team.

Moonbow ignores 30% of the enemy Def stat, which is her best option due to the fact that Wolf Queen Fang gives it a one charge cooldown, keeping it active after nearly every attack. She has the coveted Distant Counter allowing to counter attack from range and it allows her to check even staff users thanks to Null C-Disrupt, removing any status effects an enemy attempts to inflict on her and disables skills that prevent counter attacks, most notably Dazzling Staff, making it a difficult choice for that skill users to employ the standard Dazzling Staff/Wrathful Staff/Pain/Savage Blow skill combos without taking serious damage if not outright lethal attacks from her. Glare is Nailah's unique Skill C and is what makes Distant Counter with Null C-Disrupt so strong since she inflicts a movement penalty to any foe she attacked as well as any foe within one space them, reducing it to 1 tile movement.

Nailah is vulnerable to green units as she has a color disadvantage against them. Physical bulky green units like Helbindi, Surtr, and Hector easily wall her even if she manages to proc her special attack. Most mages who can immediately take her down before she can retaliate with her Distant Counter are strong options as well such as Lewyn, Ophelia, Nino, and Ishtar. Guard immediately slows her damage output by stalling her Special charge, making it a dangerous skill on an enemy for her.

Nailah's near perfect base kit requires merely a Support skill like Reposition for the standard positioning assist skill just to fill the final hole in her skill set. Any other skill inherited is up to the player as she can make use of other great skills like Atk/Spd Solo, Sturdy Impact, Wrath, Desperation, and Special Spiral which gives her specific niches and beneficial effects to go in certain directions with her kit. It is recommended, however, to take Quickened Pulse as her seal just to get her Special going immediately so she can begin to dominate the battlefield.

Hatari Scorcher
Queen of Hatari, a desert kingdom. Holding one of Hatari's traditional festivals in Askr for a bit of fun. Appears in Fire Emblem: Radiant Dawn.

Nailah: I... overestimated my limits...

Rafiel: Your Majesty, fall back. Don't fight any longer. I will take care of you, as you have done for me. Please... You must stop fighting.

Nailah: Rafiel... I will do as you say. I wouldn't want you out there dying without me.

Nailah: Stop squawking, Rafiel, I'll be all right. ...It makes me happy that you worry for me as you do. But I'll have to retreat for now.

Nailah: Betrayal is the coin of the gods. I was aware of this. All things... are predestined... ...Rafiel. Forgive me...

Nailah: I've been defeated? Here? Gah, the vagaries of war... Rafiel... Forgive me. Some promises cannot be kept...

Mistress of the Evil Eye (邪眼の主)

Returning to Hatari with recent events engraven in her heart, Nailah hoped to migrate her people across the desert.

Nailah is illustrated in the trading card game Fire Emblem Cipher with the following cards: 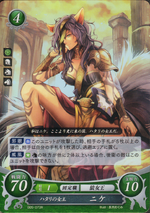 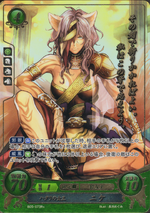 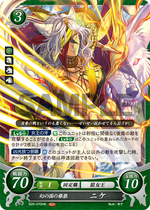 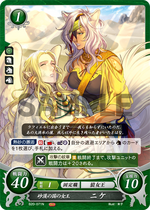 'Nailah' is the feminine version of the Arabic name 'Nail,' meaning 'attainer.'

Nailah bint al Farafsa was a queen of the Rashidun Caliphate. During a rebellion against her husband, Caliph Uthman, rebels broke into the palace and attacked him; Naila attempted to stop the blow, but merely had her fingers cut off. She remained politically active after her husband's death.

Naila is also a city in Bavaria, whose original name was 'Neulins' and probably meant 'small new settlement.' Nila is a Creek name meaning "victor", which relates to her Japanese name.

'Nailah' is also an Egyptian baby name, meaning "success" in the Egyptian language.

Nike is the Greek goddess of victory.