Chapter 7: Passing the Desert (Genealogy of the Holy War)

Abby Trott
[view]
“Leif, wherever you go, I shall follow... even to the ends of the continent.”
—Nanna to Leif in Genealogy of the Holy War

Nanna is a playable character from Fire Emblem: Genealogy of the Holy War and Fire Emblem: Thracia 776. She is the daughter of Lachesis, the younger sister of Diarmuid (and by extension, Finn or Beowolf's possible daughter and Fergus' possible half-sister if the latter), and a cousin of Ares. As a member of the noble family of Agustria's House Nordion, she possesses minor Hoðr blood. By the end of Thracia happenings, she is married to Leif, though both can be paired with other characters during the events of Genealogy of Holy War.

Nanna's substitute character is Jeanne in Genealogy of the Holy War.

Before Genealogy of the Holy War Generation 2 and Thracia 776

After Lachesis survived the Battle of Belhalla, she made her way to Leonster, where she gave birth to Nanna in the year 761. The following year, Thracia laid siege to Leonster, and Lachesis, along with Finn, Leif and Nanna, fled. A few years later, Lachesis left Nanna in Finn's care, setting out for Isaach in search of Diarmuid.

When Leif subsequently fled to the village of Fiana, Nanna accompanied him along with Finn. Here, she and Leif would be placed under the care of the village's leader Eyvel, growing up alongside Mareeta, Orsin, Halvan, and Tanya.

Nanna first appears alongside Leif and Finn in Leonster at the start of Chapter 7, where they find themselves stranded, surrounded by hostile forces spearheaded by Bloom. Seliph's army manages to fight through the enemy forces in the Yied Desert to rendezvous with the trio, and Nanna is reunited with her brother Diarmuid.

After capturing Conote in the same chapter, Nanna can share a conversation with Ares, where she explains that Sigurd is not Eldigan's murderer.

Nanna first appears in Chapter 1, where she and Mareeta are captured by Raydrik of Munster when he raids Fiana in an attempt to find Leif.

Nanna is later reunited with Eyvel in Chapter 5, but under dire circumstances: The pair are trapped in an arena by Raydrik, forcefully pitted against Mareeta, who has gone berserk due to the influence of the Shadow Sword. Leif's army subsequently breaks into arena, but disaster strikes, with Mareeta recaptured and Eyvel petrified and taken away. Nanna is fortunately spared, and she joins Leif's army.

After Leif's army successfully secures control over Munster in Chapter 24, they embark on a mission to rescue Eyvel in Chapter 24x. Here, Sara uses the Kia Staff to undo Eyvel's petrification, reuniting Nanna with her.

Nanna will then go on to support Leif in his final battle against Veld in the Final Chapter, thereafter liberating Northern Thracia from the Grannvale Empire. Nanna will wed Leif thereafter, assisting him in the reconstruction of Leonster and the establishment of the New Kingdom of Thracia. Her kind and selfless nature eventually earns her the admiration of the general populace, and she is affectionately addressed as "Princess Nanna".

Nanna's characterization shifts between Genealogy of the Holy War and Thracia 776.

In Genealogy of the Holy War, Nanna is portrayed as a headstrong and determined person, as shown through her assertiveness in urging Leif and Finn to abandon Leonster and seek cover in a nearby church. If Finn is her father, he even likens her to her mother Lachesis, who is similarly stubborn and strong-willed.

In Thracia 776, Nanna is markedly quieter and more reserved. This can immediately be seen in Chapter 1, where her capture by Raydrik sees her doing nothing to fight back, instead silently accepting her circumstances. In Chapter 5 she's seized by fear in the arena, heavily relies on Eyvel's protection to stay alive despite being armed herself. This is due to the fact that Thracia 776 occurs a year before Genealogy of the Holy War, and after having been somewhat sheltered until the start of the game and then gone thorough many hardships in it, she grew into a headstrong woman like her mother. This is confirmed by her actions towards Homer in his recruitment talk: when he tries to seduce her, rather than simply rejecting him or talking her way out of it, she slaps him and berates him, which leads to him joining Leif's forces.

Regardless of parentage, Nanna is a solid unit. The simple utility of a mounted healer is quite invaluable, and her Hoðr blood means that her initially poor base stats will quickly cease to be a problem. Nanna can inherit A-rank swords at base, which makes her a good offensive unit, and thanks to her Charm skill, Nanna being anywhere near the frontlines provides her allies with a decent evasion and accuracy boost, which can stack with both her brother's Charm skill and Seliph's Leadership. She can even use the Return staff at base, which, if she has inherited the item, will allow her to immediately reunite Leif and Finn with the rest of the army (along with herself, if she has a Return Ring).

In terms of parents, Nanna's staff rank and Magic are both low, meaning that it is generally best to focus on her physical combat; she does not gain much from high Magic aside from slightly more effective healing and better damage with magic swords, and her natural bases and growths are not so low that she needs the boost. She notably lacks Pursuit, which is the main weak point in her combat kit, so a father which provides her with Pursuit is highly valued. Because of this, Beowolf is the most popular option for a father; not only is he an easy pairing to obtain, but he passes down the much-valued Pursuit, along with Charge and excellent physical growths. This will turn Nanna into a very solid and versatile cavalry unit, able to support her allies and take down enemies. Finn is an effective second option, passing down Miracle to make Nanna much safer on the frontlines, though this will deprive Finn of his lances in the second generation and can be difficult to obtain when Finn and Lachesis only share two chapters and no conversations. If the player is absolutely determined to focus on Nanna as a staff-user, then Claud is the only real option, as he will boost her staff rank to B, though this will make Diarmuid largely useless. Azelle makes for a good compromise - both children will still get Pursuit, and his Magic-boosting Fjalar blood will boost both children's use of Magic Swords, and a slight uptick to Nanna's staves.

In Chapter 7, if Nanna speaks to Diarmuid, she will gain one point of Luck.

In Chapter 7, if Finn is Nanna's father, she may speak to him to get 5 points of Speed after Darna is captured.

In Chapter 8, after Conote is captured, Nanna may speak to Ares to reveal the truth about Eldigan to him, and she will receive two points of Strength and Defense.

In Chapter 10, Nanna may speak to Leif at any time for 100 love points and an added bonus of three points to her HP.

Nanna starts off fairly weak, but she does come with her personal weapon, the Earth Sword, and she can become very strong after promotion with it. The bonus she grants to nearby allies thanks to Charm makes her an invaluable unit in the hardest chapters, where evasion is much needed. On top of that, Nanna supports the frontlines even more effectively with her ability to heal on horseback without having to rely on Physic staves early on in the game. Nanna's only weak point outside of her poor statline is a low staff rank that does not rise on promotion, which means she will take much time to use the strongest staves, but her pure utility as a healer and support unit with Canto will keep her useful for a long time. Nanna is one of the best candidates for the Wrath Manual, as it boosts her offense and low FCM. It works extremely well in conjunction with the Earth Sword, which allows her to kill and survive hordes of enemies.

It is recommended that you give her the Ced Scroll to fix her somewhat low Speed. This should be mixed with other scrolls to raise her Magic, along with the Hoðr Scroll to raise her HP and combat fatigue. Also, try to boost her low Build with the Nál Scroll, as she loses Speed even with an Iron Sword on hand.

Mystletainn Scion
Daughter of Lachesis, the princess of Nordion, and descendant of Hoðr, known as the black knight of the 12 crusaders. Appears in Fire Emblem: Thracia 776.

Beloved Princess
Daughter of Lachesis, the princess of Nordion. Known for her grace, charm, and kindness. Appears in Fire Emblem: Thracia 776.

“Prince Leif, I leave the rest in your hands...”
—Nanna's death quote

Nanna - The Princess of Nordion (ノディオンの王女 Nodion no ōjo)
"Following their victory at Belhalla, Nanna devoted herself to helping Leif liberate Agustria. After wedding Leif, now King of New Thracia, Nanna dedicated her time to aiding the many orphans of the war. Known for her beauty and compassion, she was affectionately called "Princess Nanna" even after becoming Queen. By all accounts, she continues to enjoy a happy marriage with Leif to this day."

Nanna is illustrated in the trading card game with the following cards: 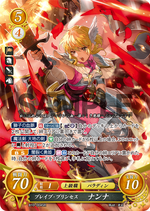 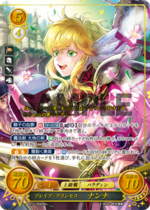 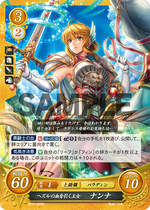 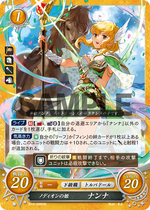 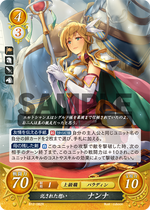 In Norse mythology, Nanna is the wife of the god Baldr and the mother of Forseti.