Cavalier
[view]
“Excuse me, sir!? We were born into the knighthood and are prepared to die fighting! We'd be a disgrace to let our master perish out there all alone. We're going with you.”
—Naoise

Naoise (Noish in the Trading Card Game and Fire Emblem Museum, Noische in the Super Tactics Book) is a playable character from Fire Emblem: Genealogy of the Holy War. Alongside Alec and Arden, he is one of the few knights of Chalphy who accompany Sigurd in his war against Verdane.

Naoise is a proper and dutiful knight who is experienced and thoughtful, in contrast to Alec. He is calm and serious with a strong sense of honor, as noted from his immediate response to Sigurd's attempt to leave for Jungby alone. Naoise is shown to be the most stereotypically knightly of Sigurd's group of soldiers, being immediately willing to throw his life away for his lord and being outraged at the notion that Sigurd should head for Jungby alone.

Naoise is also shown in his lovers conversations to value a person's promises highly and is fiercely protective of his loved ones, being immensely upset at Lachesis breaking her promise to him and refusing to head for Leonster should the player pair the two of them together.

As the Cain Archetype of Genealogy of the Holy War, Naoise specializes in HP, Strength and Defense. He is one of the more durable mounted units available in the game. Unfortunately, he is likely to wind up being the weakest overall mounted unit available to you in the first generation due to several problems that cripple his offensive capabilities.

Naoise's biggest flaw is that he lacks the Pursuit skill, which allows a unit to Double Attack if they have more Speed than the enemy unit. This means his uses will generally be limited to weakening enemy units or finishing low HP enemies off, as it will be extremely rare for him to kill an enemy by himself. Despite sporting Critical and Charge, Naoise does not really get any advantage from them, since his low Skill and Speed means he only activates them on rare occasions. Since he activates Critical unreliably, it will often just wind up over-killing a weakened enemy unit. On the flip side, sometimes Charge will activate at a very inopportune time and wind up getting Naoise killed. Another problem arises in that Naoise is locked out of A-level Swords and Spears even after promoting, meaning that he can never wield Silver weaponry.

Despite all of those flaws, there are options available to turn Naoise into a competent and even dangerous unit, but fixing these flaws comes at the price of weakening some of your other units that could potentially make better use of those items than Naoise can. For example, giving Naoise the Speed Ring (from a Village), Skill Ring (from a Boss), Pursuit Ring (from Arden), or Brave Sword (from Ayra) will help bring him up to speed with your other horse units. Giving him all of those items will make him truly dangerous, and it only comes at the cost of taking items from foot units that struggle to keep up with your main army on most maps anyway.

Naoise can make an interesting father, as his children have a better chance of utilizing his potentially explosive skills than he does, and he has good Strength, Defense, and HP growths which will make his children pretty durable and strong. He does, however, come with some downsides as well. He has no Holy Blood, and the selection of weapons he can pass on is limited since he cannot obtain A-level Swords or Lances. He lacks Pursuit which is problematic for half of his pairings. That being said, many pairings will see his children turn out pretty strong. Naoise is best paired with Ayra or Brigid. Lachesis and Erinys are also decent choices. Sylvia, Edain, and Tailtiu should be avoided. They are not worth it either because the children will lack Pursuit, inheritable items, they are Magic oriented units, or some mix of all of that.

In Chapter 5, after Phinora Castle is captured, if Erinys/Lachesis is in love with Naoise, she may speak to him, but nothing will result of this conversation.

Naoise is illustrated in the trading card game Fire Emblem Cipher with the following cards: 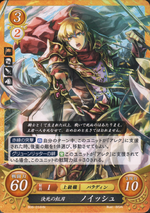 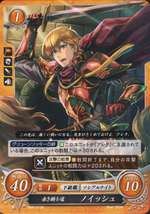 Naoise is a knight from Irish mythology.