Kaiji Tang
[view]
“I am strong. I am wise. I am lovely. And most importantly, I am right! ...Me! No one else!”
—Narcian, going into battle

Narcian is a boss character in Fire Emblem: The Binding Blade. He is one of the Three Wyvern Generals of Bern, and an extremely ambitious officer.

One of the reasons why Narcian was able to get his position was due to his rival, Galle, being born outside of Bern, thus allowing Narcian to get the position as Wyvern General.

He was entrusted with the invasion of Lycia, and his lieutenant is Flaer. He is responsible for many actions during Roy's journey through Lycia and the Western Isles. After conquering castle Araphen, Narcian left his frightened subordinate, Slater, to guard the territory. Erik, the marquess of Laus and Leygance, an Ostian were convinced by Narcian to betray the Lycian League.

Conspiring with corrupt noble, Roartz, to take over Etruria, Narcian helped capture King Mordred, but was opposed by Cecilia, one of the Etrurian Generals. Unable to defeat her, himself, Narcian enlisted the help of Zephiel to capture her, planning to unleash his fury on her once she was in his grasp. However Cecilia was freed before she could fall victim to Narcian's cruel whims.

Eventually, due to his constant failings, he learns from General Murdock that King Zephiel has demoted him, replacing him with Galle.

However, Murdock tells him that if he can stop the Lycian Army from retaking the capital of Etruria, Aquleia, he will try to convince Zephiel to restore him to his original rank. Before the battle, Narcian, not wanting to suffer for his own failures, decides to frame one of his subordinates, Zeiss, for conspiring to give information to the Lycian Army, having learned that Zeiss' sister, Melady, has joined the Lycian Army. However, Zeiss, having learned of Narcian's plot to frame him from Galle, ends up joining the Lycian Army, while Narcian is killed during the battle.

He is a very narcissistic person, has a tendency to bear grudges, and will not hesitate to let his underlings die for him so that he can live; for example, his loyal lieutenant Flaer was abandoned to die while holding Cecilia captive.

Narcian has a reputation for being lecherous. Narcian requested Erik capture Clarine for the sake of entertainment. When Zephiel captured Narcian's hated enemy, Cecilia, Narcian asked Zephiel if he could have custody of her in a personal cell so he could make her pay.

Despite his very negative traits, Narcian also shows some kind of self-awareness. If Cecilia battles him, she will say that it wasn't him that defeated her the first time, but Zephiel, with him conceding the point. In Heroes, he admits to be full of himself. Very surprisingly, Narcian also admits that it was his own confidence that took him where he is now, hinting that he worked hard to be a general.

Narcian is not an easy boss, as he has somewhat decent speed for a Wyvern Lord and he has a Runesword and the Delphi Shield, which can be problematic in defeating him. It is nearly imperative to use somebody who is resistant against the Runesword so it doesn't help him a lot and/or can evade the Runesword easily. The easiest way to defeat him is to steal his shield and gem, and proceed to unleash a barrage of arrows from any snipers/nomad troopers available. This will most likely kill him within a turn at best, as the recovery effects of his sword won't be able to keep up with the critical damage he receives from bows. Another method is to switch to mages, especially if they wield light or dark magic to get the magic advantage; just be sure he or she can deal more damage than Narcian gets back. A promoted Raigh, Saul, or Elen would prove useful here. However, if his Delphi Shield is stolen, the Aircalibur tome is an ideal weapon to use on him, and Lilina/Lugh can kill him in one or two rounds with it. Finally, a decent leveled Hero wielding Durandal can possibly destroy Narcian in a single hit, due to its incredible power and bonus damage to Wyverns. A decently leveled Sage or Valkyrie wielding Forblaze could also deal heavy damage as it targets his lower resistance, but the accuracy may be shaky considering its trinity disadvantage.

Narcian's stats are rather average, except for that low speed. Galle can be more consistent in the Trial Maps if you did not train Melady or Zeiss, as Galle has higher stats than Narcian in everything except speed and luck.

Wyvern General
One of three Wyvern Generals of Bern. Conceited and vainglorious. Appears in Fire Emblem: The Binding Blade.

Vernal General
One of the three Wyvern Generals of Bern. Making a rare exception, he is donning an unusual outfit just for the spring festival. Appears in Fire Emblem: The Binding Blade.

“I am strong. I am wise. I am beautiful. And most importantly, I am right! Always! ...Me! No one else!”
—Narcian' battle quote in The Binding Blade.

Narcian: You...! You're that girl!
Clarine: Excuse me? Have we met before?
Narcian: What?! You have forgotten me?! That...is inconceivable!

Narcian: You're Melady... Hah! You betray your home and join the enemy. You are a disgrace!
Melady: My loyalty has always lied with the princess. And so it shall remain!

Narcian: You...
Zeiss: General Narcian... I heard everything from Sir Galle! Do you...have no sense of honor left in you at all?!
Narcian: Galle...! He has always been a thorn in my side! But no matter... After I wipe you out here, no one will know the truth...

Narcian: Cecilia... Back for more, are you?
Cecilia: It was Zephiel to whom I lost. Not you.
Narcian: Fair enough, but now you will know my true strength!

Narcian: If it isn't General Perceval, the back-stabbing traitor!
Perceval: Joining you...was the greatest mistake of my life. I will make up for it...by defeating you!

In the Fire Emblem: Hasha no Tsurugi manga, he is killed by his subordinate Zeed as vengeance for Jemmie's death.

Narcian is illustrated in the trading card game Fire Emblem Cipher with the following cards: 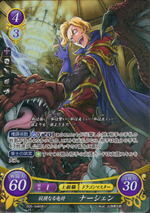 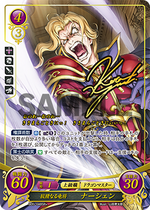 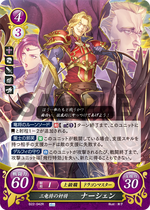 Narcian seems to be a corruption of Narcissistic, or Narcissism, befitting his personality, as the word originates from a young man of Greek mythology, Narcissus, who fell in love with his reflection because of his arrogance.